St. Ignatius Loyola: The Music of the Trinity 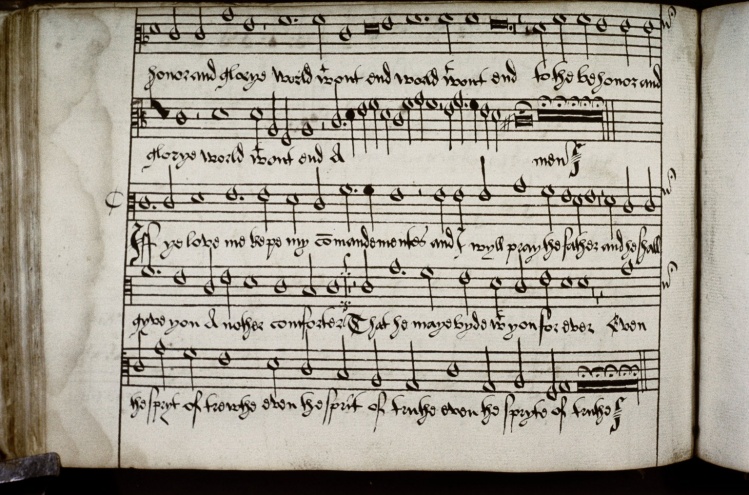 The Trinity has never been easy to explain in plain speech. From the first gestures toward Trinitarian theology in the early Church, this Christian doctrine has been mysterious and figural. Already in the first century, the Trinity was expressed ritually in baptism -- indeed, I think that’s probably where the doctrine emerged -- but performing a ritual and explaining a concept are entirely different tasks.
Nevertheless, the great theologians of the first four centuries each tried out different analogies, metaphors, and images to aid understanding. Some of these attempts did not catch on and have been forgotten. Others have stood the test of time, such that they ceased to be regarded as figural. In addition to Father-Son-Spirit, the other famous Trinitarian expressions drew from examples either natural or scriptural -- or preferably both. At their best, they can express the mysteries of distinction-in-unity and dynamic unchangeability. The imagery of firelight (radiance, refulgence, sun-light-warmth) and water (fountain-stream) were popular, as were the concepts of procession or emanation (which captures the essence of both light and water imagery).
On today’s feast of St. Ignatius Loyola, let us recall the Trinitarian figure that enraptured him, recorded in the Reminiscences (section 28). Ignatius was pondering his own practice of praying to the three persons of the Trinity separately and wondering whether this was proper, until one day...
"while praying the office of Our Lady on the steps of [a] monastery, his understanding began to be raised up, in that he was seeing the Most Holy Trinity in the form of three musical keys (en figura de tres teclas), and this with so many tears and so many sobs that he could not control himself. And on walking that morning in a procession which was leaving from there, at no point could he restrain his tears until the mealtime, nor after the meal could he stop talking, only about the Most Holy Trinity" (trans. Munitiz and Endean, modified)
For Ignatius, the Trinity was captured best in the figure of a musical triad, the most common type of chord in Western music. But what was so arresting about this image? Why did it work better than others he had learned? Some reflection on 16th-century sacred music can help us to approach answers to those questions.
In 1522, when Ignatius had this insight, sacred music was primarily sung a cappella or played on an organ with just intonation. The use of equal temperament in keyboard tuning was not popularized until Bach’s well-tempered Klavier much later, and so Ignatius would have heard musical intervals at their naturally occurring wavelengths. When we combine the practice of just intonation with the fact that most sacred choral singing was done by men, we get a much clearer sense of Ignatius’s musical experience. In short, Ignatius was used to hearing overtones.
The resonances of human vocal cords produce waves besides the fundamental pitch being sung. A well-trained singer can produce higher-frequency upper partials or harmonics, which sound like quiet, ethereal whistles or flutes that alight above the fundamental pitches. These overtones are difficult or impossible for us to hear when the fundamentals are produced by women’s voices, since they are beyond the upper range of our auditory spectrum. But men’s voices, especially when singing justly intoned fifths or triads, can and should produce overtones as often they sing. (In American usage, overtones are thus often associated with men’s glee clubs or barbershop groups.)
I recall many times in my life as a choral singer when a few of us would practice intonation by trying to produce overtones. Resonant spaces, such as stairwells and stone cathedrals, afford ample opportunities for experimenting with the overtone sequence. I would say that I had not experienced the full beauty of choral music -- and the mysteriousness of audible waves -- until the first time I stood rapt by the faint sounds that floated above a perfectly tuned triad of men’s voices. High flute-like tones were undeniably audible, although none of us were (intentionally) singing them. I knew that the overtones were resonating back to me off the high walls, but it seemed also as if they were immediately present or even inside of my head. Overtones sound as if they happen in the midst of the group; they are often felt more than they are heard.
The musical triad, then, is a fitting figure for the Trinity. It embodies distinction-in-unity and dynamic unchangeability. What is more, a triad is a trinity that emanates more being. In the second and third centuries, the light from light figure -- enshrined in the fourth-century creeds -- captured the concept of undiminished giving, how a flame could give rise to another flame without itself being diminished. But the musical triad might capture that concept even more aptly: it is the triad’s very self-relationality which generates the overtone sequence. In other words, a musical trinity is a creator, or a begetter.
St. Ignatius of Loyola was a mystic and could justifiably be said to have been hearing things that others did not. In the case of the tres teclas, though, he was hearing things that were really there for every well-attuned ear. He heard the Trinity as a justly intoned musical triad, a relationship which through its harmony emanated other notes in a procession of audible light.