Speaking Up for Standing Down 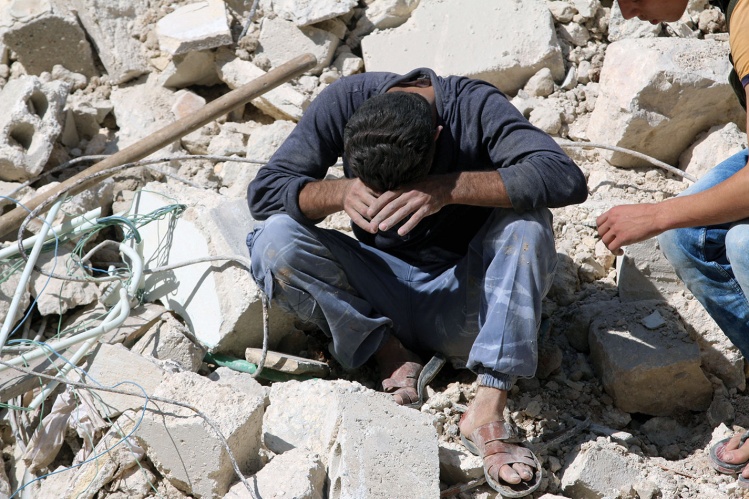 Barack Obama may not be leaving office with the successor he hoped for, but he could still do a great service by explaining why the United States has not rescued Syria—and more important, why it should not. The president needs to counter those who argue that U.S. credibility depends on besting Russia in Syria—show that Putin! Too many politicians, pundits, and foreign-policy experts have a list of must-do military plans: crater Syrian and Russian airfields; carve out safe areas within Syria for refugees by creating no-fly zones; ship more lethal weapons to the “moderate opposition.” The neoconservative Robert Kagan recently floated another idea: rattle swords in Ukraine to distract Putin from Syria. Like squeaky wheels, the military-minded never stop. They are usually not in the military.

Americans seem largely indifferent to these arguments. Stunned attention to the photos of injured children and men weeping over the bodies of dead babies has elicited sympathy without evoking a groundswell of support for intervention. The military-minded say that the American public doesn’t fully understand the Syrian situation, its geopolitical importance, or the risk to U.S. credibility in not having boots on the ground. Yet, that very public, on the basis of our experiences in Iraq and Libya, has good reason to conclude that acting militarily in Syria is going to make things worse, not better. The public may also suspect that diplomatic relations with longtime Middle East allies Turkey, Egypt, and Saudi Arabia have frayed, some dramatically so. Do their national interests still converge with our own? In recompense for the Iran nuclear agreement, the United States tried to allay Saudi Arabia’s anxieties by supporting its war in Yemen. Turkey’s President Erdogan is using NATO membership and renewed ties with Russia to leverage his policy against ours by attacking Syrian Kurdish forces and making irredentist claims in northern Iraq. Instead of pandering, maybe it’s time for the United States to reassess these alliances.

Public indifference may simply reflect Obama’s stand-back policy. Or it may signal agreement with what the president’s policy has achieved: doing nothing militarily is advancing important goals. First, the United States is not making a horrific civil war with multiple proxies even more deadly. Second, it is not baiting Russia into a larger confrontation in Syria or elsewhere. Third, it implicitly acknowledges that there can be no military victory in Syria, not for Russia, not for Iran, and certainly not for Syrian president Bashar al-Assad, even if he retains control in what has become a rump state.

By speaking forcefully now, Obama would do the American people, his successor, and the Syrian people a great service. There is no military victory to be had. There is nothing the United States can do militarily about the fighting (although much could be done for Syrian refugees). In fact, unless Obama speaks up in defense of his stand-down attitude, he is likely to be treated as the loser of Syria, while his successor will be pressed to add to the carnage by sending in the U.S. military.

What is the benefit of Obama’s insisting on the obvious? First, it removes the United States as a military factor in the war. Lingering supporters of “Assad must go”—Turkey, Saudi Arabia, and Israel—will learn to accommodate the Syrian post-bellum configuration, however it shapes up. Second, it will discourage an untested Trump administration from bombing Syrian airfields or establishing and defending safe zones, which cannot be done without boots on the ground. It will end U.S. arms transfers to the fast-dwindling moderate opposition; such weapons quickly end up in the hands of jihadists. Third, it could make the United States a semi-honest broker in the inevitable diplomatic horse-trading that will follow the recognition that there can be no military victory. In that case, having done nothing will have achieved something.