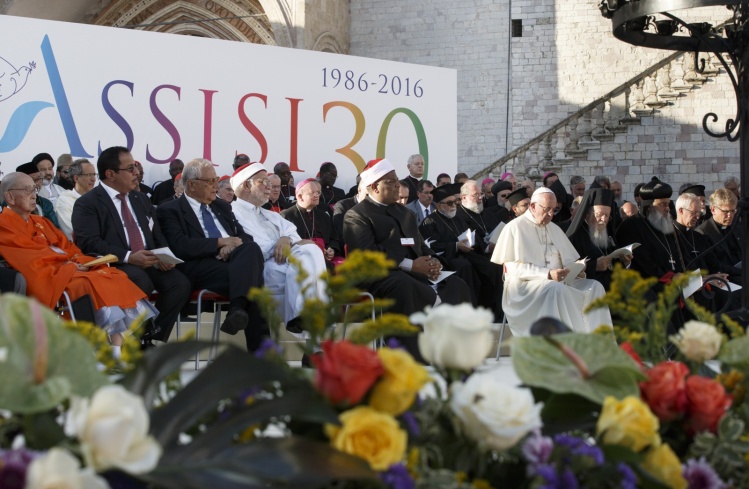 As the coronavirus pandemic shut down churches across the green expanses of the west of Ireland, Fr. Stephen Farragher decided it would be a fine idea to let a local radio station broadcast his celebrations of the Mass on Wednesdays and Fridays.

Shortly afterward, two men he knew from the local Muslim community contacted him and asked if there could be a joint act of solidarity in response to the pandemic. “Just spontaneously, because I had so much on my plate at the time, I said, ‘Look, my Friday Mass is being broadcast,’” Farragher said. “Why don’t you come at the end of Mass and you can say a prayer.” And so, just before the final blessing at Mass at St. Patrick’s Church in Ballyhaunis, County Mayo on April 3, one man intoned the Islamic call to prayer and then the other prayed for God’s mercy on all suffering from the coronavirus.

Unfortunately for Farragher, news of this small event in a rural town of 2,312 people made its way across the ocean to the alt-right Catholic media in the United States and it was twisted into: “MUSLIM DECLARES MUHAMMAD’S SUPREMACY OVER JESUS AT CATHOLIC MASS.” And this: “IRELAND; PRIEST INVITED MOSLEMS TO JOIN HIM AND GIVE A FINAL ‘BLESSING’ IN THEIR OWN BLASPHEMOUS PRAYER.” And so forth.

It is the usual inflammatory commentary from these self-appointed defenders of the Catholic faith, slanted to produce maximum resentment and a predictable wave of online bullying. “It has been a tough, tough week for me, but I’ve been buoyed by the support of many wonderful parishioners here who know me to be the person that I am,” Farragher told me by telephone on Good Friday. “Maybe if I were more cautious by nature, I probably wouldn’t have done that, but it was just a spontaneous act in unprecedented times, really.”

I had contacted Farragher because I was struck by a very large gap in the accounts I’d read. That is: St. John Paul II had allowed the same Muslim call to prayer, the adhan, to mingle with the Mass he celebrated at Manger Square in Bethlehem on March 22, 2000. In that case, it was planned in advance at the highest level of the church. To my knowledge, no one ever accused the pope of heresy, or of celebrating a Satanic Mass, because of this. No one said the pope acquiesced to “an act of Islamic triumphalism.”

Farragher said that he has tried to tell his critics about the World Day of Prayer for Peace that Pope John Paul had initiated in Assisi in 1986, when representatives of many religions prayed, each in their own way but side-by-side. “I dare not mention Pope Francis’s visit to Abu Dhabi and the statement cosigned with the grand imam,” he said, referring to the groundbreaking Document on Human Fraternity for World Peace and Living Together. “The same people who criticize me have it really in for Pope Francis as well.”

Pope John Paul, an actor in his youth, delighted in making symbolic gestures aimed at achieving reconciliation and peace. In the jubilee-year Mass in Bethlehem, he turned a potential cause of division—the usual call to prayer from the mosque conflicted with the scheduled time of the Mass—into one such symbol. For the Palestinian Christians who crowded into Manger Square, it was an electric moment.

Ballyhaunis and St. Patrick’s Church are in fact a model for responding to the diversity Europe is struggling with.
sharetweet

After the pope completed his homily with the greeting of peace, “As-salaam alaikum,” the adhan rang out from the Omar bin al-Kiata Mosque, which towers over the square where the Mass was celebrated. John Paul, seventy-nine years old at the time and afflicted with Parkinson’s disease, sat quietly and, it seemed to me, reflectively, during the three minutes that the muezzin sang the prayer in Arabic:

I testify there is no god except God.

I testify there is no god except God.

I testify that Muhammed is the messenger of God.

I testify that Muhammed is the messenger of God.

There is no god except God.

The Latin Rite patriarch of Jerusalem at the time, Michel Sabbah, said a few words to the congregation in Arabic after the prayer ended, and a big cheer went up. Later, I sought out a translation. The patriarch explained that the muezzin’s prayer had been arranged earlier, adding, “And we witness once again the unity of Muslims and Christians.”

This bit of cooperation induced tears in some of the Palestinian Christians I interviewed after the Mass. “I have no words to tell you what my feelings are,” Suad Sfeir, a Palestinian Christian woman from Bethlehem, told me. “I am speechless. I don’t know what to say.” Her husband, Tony Sfeir, who received communion from the pope, was also overcome with emotion, saying that “both were praising God.”

One can only imagine the attacks Pope Francis would undergo today if he had permitted what occurred. But at the time, the muezzin’s prayer was little more than a footnote in news coverage of John Paul’s busy day on the West Bank. Joaquín Navarro-Valls, the Vatican spokesman, described the overlapping of prayers as “mutual and respectful.” Papal biographer George Weigel, who kept a diary of the pope’s pilgrimage for First Things, made no mention of it in his entry for March 22, 2000.

As I spoke with Farragher, it became apparent to me that Ballyhaunis and St. Patrick’s Church are in fact a model for responding to the diversity Europe is struggling with. The town has been described as the most diverse in Ireland. Located seven miles east of the Sanctuary of Our Lady of Knock, it has one of the largest mosques in Ireland.

Farragher traced this to Pakistani-born businessman Sher Mohammed Rafique’s decision to open a halal meat-processing plant there in the 1970s. As the son of a farmer, Farragher expressed his appreciation for the jobs and the market this had brought to the region—and for the diversity. The community grew, as did the business, and now about a third of the students in the church-run primary school are Muslims, he said.

When Rafique died last year he was widely mourned and, Farragher said, many parishioners went to the mosque when he was remembered. Rafique’s son was one of the two men who came to him recently seeking out some act of solidarity in the face of the coronavirus pandemic, which is afflicting without regard to creed.

Because of that, good intentions can sometimes lead to unhappy results. St. John Paul II experienced that on his pilgrimage to the Holy Land, as I recall from covering it for Newsday. He had the Vatican choreograph one of those symbolic events that were so dear to him. In a ceremony at the Notre Dame Center, located just outside the walls of the old city, Muslim, Christian, and Jewish children sang songs of peace as the pope, the chief rabbi, and a prominent sheikh prepared to plant three olive trees. Just to get the Jewish and Muslim leaders to share the stage took great effort, and then the ceremony fell apart. The rabbi asserted that the pope had affirmed Jerusalem as the “united eternal capital” of Israel, which wasn’t the case, and then the sheikh responded with a fiery speech and walked out.

We never know if the seeds we plant will sprout. But even if they fail, we don’t stop planting.