The precarity of the Oslo Peace Accords
By The Editors 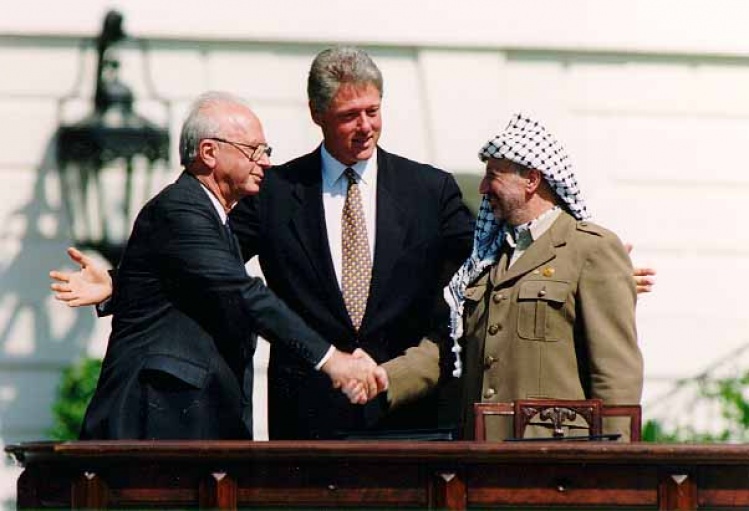 The Israeli-Palestinian agreements for mutual recognition and a measure of Palestinian self-rule bring to mind the final lines of the ancient prayer of Zechariah: "guide our feet into the way of peace." For the Israelis and Palestinians are embarked on an arduous journey, a longterm peace process. More than a series of discrete events that begins with a treaty signing and that ends with the relinquishment of contested territory, the Israelis and Palestinians must face up to all of the resentments, justifications, and claims created over decades of struggle in which thousands were killed and maimed and in which history was rewritten to suit political needs. It is still a very small stretch of territory which will be filled with anger and resentment for a long time to come.

The agreement reached under deep cover in Oslo between Israeli Foreign Minister Shimon Peres and Mahmoud Abbas of the PLO and signed under the approving eye of the president and two former presidents of the United States has the air of a done deal. Scrutiny of the accords and speculation about motives and outcomes disclose not only the daring of the agreement, but the precariousness of the process the Israelis and Palestinians have embraced.

The daring was celebrated in Washington on September 13 before a world still slightly astonished at this turn in what had seemed an intractable and interminable struggle. The precariousness is still before us.

Yasir Arafat and the PLO, having lost their Soviet sponsors and their various Arab bankrolls, were becoming superfluous representatives of the desperate inhabitants of Gaza and the West Bank. At the same time, Hamas, the Islamic religious group, has emerged to play an increasingly militant role as advocate and enforcer in the occupied territories. Given Arafat's waning influence, goes the argument, he had little choice but to strike a deal now with Israel. Ergo, the agreement is only as solid as Arafat's ability to deliver on self-rule and economic improvement in the territories. He must control dissident elements within the PLO and its splinter groups, which over the years have proved even more fractious than Israeli political parties. And finally, he must wring aid from Arabs and other governments as well as from a strapped United States. For large numbers of Israelis and American supporters of Israel, his chances of success on all these fronts do not look all that solid.

But, absent progress toward peace, are Israel's prospects any better? It has seen its own future and prosperity diminished under the growing economic, political, and psychological constraints that come with being on constant military alert. In 1991, the Bush administration, using aid as leverage to force an end to new settlements in the West Bank, can only have reminded the Israelis that the clock and the meter were ticking down on U.S. subventions. And President Bill Clinton, by his studied distance from the ongoing Middle East negotiations in Washington, must have made it abundantly clear to the Israelis that he was not investing his meager supply of political capital on the outcome. No more than Arafat and the PLO can the Israeli government guarantee that dissidents, and the West Bank settlers in particular, will not work to subvert the agreements, perhaps even turning to violence and a civil war to maintain their turf in what will soon become Palestinian-controlled territory and ultimately part of a Palestinian state.

This catalogue of pros and cons only emphasizes the larger point: the peace process is a high-risk venture for both Israelis and Palestinians. And though Israel will always have an overwhelming military advantage should the agreement break down, there will be no return in the eyes of the world to the political status quo ante. Unquestionably, the nay-sayers in each camp can conjure dire scenarios: in one, Israel is ultimately and fatally threatened by a full-fledged and fully armed Palestinian state; in the other, Palestine remains a rump state unable to govern itself or to achieve economic viability. The doubters think all moments are inauspicious for putting their feet on the path of peace. But if not now, when?

There is no time like the present to begin the long and arduous effort to finally build trust and establish confidence between two peoples whose energies, respect for learning, and oddly similar political experiences could make at last an oasis of democracy and prosperity in the Middle East.