Bishops vs. Bishops
By Agostino Bono 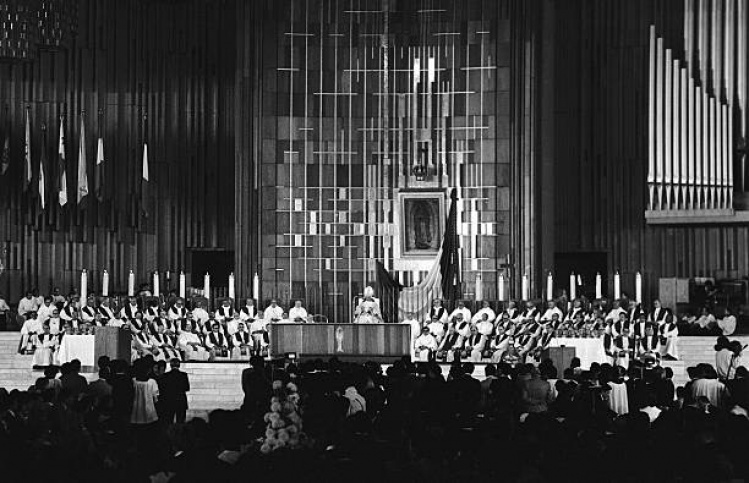 The strong conservative undercurrent of the Latin-American Catholic episcopacy is starting to come to the surface. The immediate victims of this muscle-flexing are the many internationally unknown bishops of small dioceses who are, with determination and innovation, trying to make the church relevant to the local faithful.

One such bishop, Julio González Ruiz, has been removed by the Vatican as head of the Diocese of Puno, Peru. Other bishops threatened with removal include Leonidas Proaño of Riobamba, Ecuador; James Charles Burke of Chimbote, Peru; and Jesús López de Lama of Corocoro, Bolivia. The basic “sin” of these prelates has been to take seriously the pledges of the Catholic Church to unite itself with the poor and suffering—pledges which have been publicly subscribed to by many of the hierarchical elite who are now comfortably watching their episcopal brothers under fire.

Since the Second Latin-American Episcopal Conference held at Medellín, Colombia in September, 1968, the Catholic bishops of this region have had an international reputation as progressives dedicated to erase the past image of the church as supporter and accomplice of the powerful minorities. A reading of the Medellín documents support this. The documents favor the “liberation” of men from the socioeconomic, political, cultural and religious bonds which keep people from realizing their potential.

The documents, however, were the result of a well-organized progressive minority and not a reflection of majority episcopal thinking. The overwhelming majority of bishops are conservatives. But they came to Medellín unprepared and un-oriented. The progressives took the conference seriously and came with working papers, speeches, drafts, theological studies, etc. In the four years since Medellín, many bishops have privately admitted that they did not read the documents they signed, or if they did, they did not understand them.

Things are now changing. Spurred by such news accounts of Marxist priests in Chile, guerrilla priests in Uruguay and rebel priests in Argentina, the conservatives are uniting. Their numbers plus the support of Vatican officials, especially the apostolic nuncios, give them commanding power.

Bishop González was removed from Puno without any official public charges against him. The 43-year-old prelate said he was accused in private of sexual obsession, homosexuality, heresy and incompetence. The sexual obsession charges stem from his habit of publicly hugging and kissing people.

A letter from Cardinal Cicognani, written when he was Vatican Secretary of State, said kissing shows “excessive confidence” and is an “unsupportable method for the apostolate.” Bishop González, however, knows that kissing is not the real issue. Nor is it his mod clothes, long hair and sideburns.

“It is a battle of mentalities,” he asserts. “I think that what has happened to me, happened to David. They sent David to fight and gave him a heavy shield to carry. He protested and asked for permission to throw the shield away. Then he picked up a sling and killed Goliath. My church has sent me to kill the Goliaths of sin, poverty and backwardness. But in this fight a shield has been imposed upon me, and I have tried to take it off. This is my sin.”

A similar “battle of mentalities” also affects the other bishops under fire causing many of their supporters to come to their public support before the prelates share the same fate as Bishop González. This is the case in Riobamba where the Reflection Group, an organization of progressive priests, has accused the oligarchy and the conservative hierarchy of planning to remove Bishop Proaño by kicking him upstairs to a post in the Latin-American Episcopal Council (CELAM).

Like Puno, Riobamba is inhabited mostly by Indians (two thirds of the population), the majority of whom earn a meager living as landless farm workers. The Indians also face the heavy prejudices of the whites and mestizos (mixed blood) inhabitants of the city.

“Sociological studies on Ecuador describe the social situation as a pyramid of domination and dependence. On the top is the 4 percent of the population formed by the families who enjoy all the privileges and have all the powers. The hierarchical church is considered an ally of the privileged classes. The middle class constitutes 20 percent of the population. The base of the pyramid is formed by the 76 percent who live in subhuman conditions,” said the Reflection Group protest statement.

It is Bishop Proaño 's attempts to alleviate the “subhuman conditions” that are getting him into trouble. Before his arrival in Riobamba in 1954, the church was serving less than one fifth of the people, leaving the poor Indians to fend for themselves. The affluent were used to having a bishop as an ornament for special events and parties.

In the diocese, about 78.7 percent of the population live off farming, yet only 7 percent of the farm population own land. The laborers (Indians) earn about 40¢ a day. One concrete gesture by Bishop Proaño, 62, was to apply the agrarian reform law to church lands, making Riobamba the first diocese in Ecuador to do this. He also developed radio schools which have taught reading and writing to over 13,000 Indian adults, invited religious orders to enter the diocese specifically to work with Indians, developed institutes for the education of Indian leaders and founded the Center for Studies and Social Action (CEAS). Since 1957 CEAS has organized twenty-five cooperatives and is engaged in social action programs in thirty-three Indian communities. All this has antagonized the Riobamba elite who were used to Catholic action programs as being nothing more than a meeting ground to plan their social events.

“What bothers them [the oligarchy] is the attention given to the formation of the Indian. When I say that our first obligation is the formation of man, they cannot understand this phrase. They have a materialistic mentality which would have the bishop build houses and churches. But they do not want to see a bishop who forms men to think for themselves, to become aware of their situation and to grow like men,” explained Bishop Proaño.

Although Pablo Cardinal Muñoz Vega of Quito has publicly denied any attempts to remove Bishop Proaño, the Riobamba priests are skeptical. They have the example of Bishop González and each day they read about more bishops getting into trouble for trying to apply Medellín.

“I think that when the time comes for action, we hesitate. We doubt. We need more spirit, more daring to risk renovating experiences and attitudes,” said Bishop Proaño  in criticizing the lethargy of the Latin American hierarchy.

The current scene indicates that the bishops go beyond lacking initiative. They are also ready to squelch anyone committing the church to the concrete problems of the faithful.

Agostino Bono, a previous contributor, is an editor for Latinamerica Press, Lima, Peru.