Reading the Bible in School 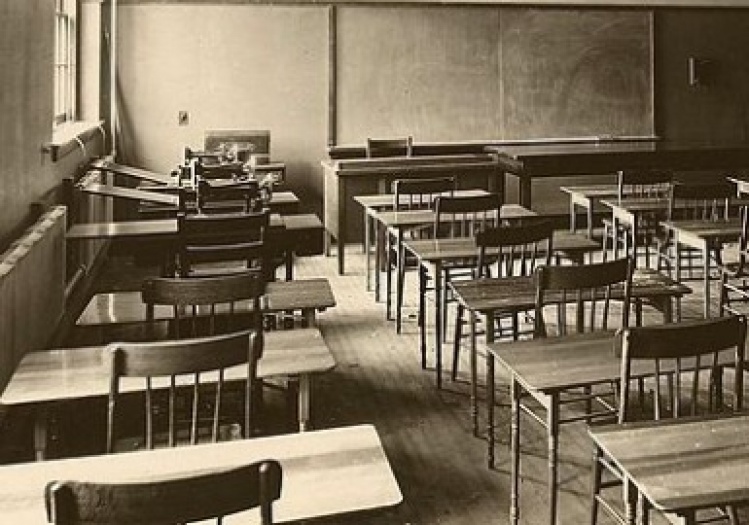 Sooner or later the Supreme Court of the United States will be called on to determine whether the reading of the Bible in classrooms "without sectarian comment" is or is not  an infringement of religious liberty and a denial of the constitutional right of the individual to "worship God according to the dictates of his conscience." The latest state decision was handed down on June 27, 1929, by the Supreme Court of South Dakota.

Marvin Finger was a pupil in the public schools of Meade County during the month of February, 1925, at which time the school board of Faith School District, the competent authority, directed that the Bible be read or the Lord's Prayer recited, without sectarian comment, in all schoolrooms wherein public school was being conducted. Protest was made by certain of the Catholic pupils, and for a short period thereafter they were excused from attendance. Some disarrangement seems to have followed this exemption, whereupon the board instructed the superintendent to see to it that no child missed either Scripture reading or opening exercises in the morning. That order was enforced, and young Finger was summarily expelled and informed that he would not be taken back unless he signed a written apology and promised to "willingly and cheerfully comply" with the school board's regulations.

His father sought, by an action of mandamus, to compel the school board to readmit young Marvin and thereafter excuse him from attendance at what the father called religious services. The sought-for relief was denied by the Meade County Court. On appeal, the State Supreme Court, by a three to two vote, reversed this decision, in consequence annulling section 7659 of the State Code, which provided that the Bible might be read, without sectarian comment, in the state schools.

Justice Burch, who read the decision, sagely notes the difficulty in such cases of securing a judicial determination because of the personal beliefs and prejudices of the deciding judges, and consequently begins his opinion with a brief historical outline showing that the men who settled America came to this new land to escape persecution for their religious beliefs. That fact was responsible for the guarantees which appear in the federal constitution and have been copied into the constitution and laws of each of the states. Those men knew the dire consequence of state interference with the church. They knew that religion cannot be enforced by law; that it must result from, and only from, stern and honest conviction.

The legitimate function of the public school, said the Court, is to impart secular knowledge. Under our system of government, religious teaching is confided to individuals and organizations not supported by the state, who may use religious books with no restriction on the comments that may be made. Obviously the limitation of comment indicates intent to trespass on forbidden or dangerous ground and to undertake in some degree religious instruction, even though tenets of no particular sect are to be endorsed and expounded. The opinion shows that constitutional restrictions were not laid to protect Christianity from other forms of belief, but rather to prevent disputes between what the Court called "sects of the national religion."

For if, they declared, disputes arise from controversies between Christians, and not between Christians and others, it is because this is a Christian nation; so that, while the reading of the Koran, for example, would not be an act of religion, the reading of the Bible or the recitation of the Lord's Prayer are bound to be reverenced for their religious implications. And a Louisiana court, dealing with a similar problem, declared that selections from the Bible are read and taught as the inspired word of God, and God, as the Author of the book, is consequently worshiped in such reading. And while Justice Burch declared his belief that the peace and safety of the state would be enhanced by the teaching of morality and wholesome beliefs, he added: "It does not follow that a reading of the King James version is essential to such instruction." It was that version which was read in the South Dakota school, and while the school board frankly agreed that the reading of any other version would accomplish the same desired purpose, the Justice added that the difficulty lay in the selection of the particular version and the persons to whom the selection should be read by the teacher. Besides, it is not necessary for the teaching of religion to youth that it be taught in the public schools, for we have many churches whose function it is to teach religion.

A great difficulty was the determination of whether or not the King James version was in fact "sectarian," though the Court took judicial notice of the fact that it is a version acceptable to Protestants but not to Catholics, and that Protestants use all versions as substantially the same, excepting only the Douay, which is exclusively Catholic. This Douay text sanctions certain dogmas and practices of the Catholic Church which are denounced by Protestants; and if, said the Court, that aversion is well founded, that in itself is sufficient evidence of substantial difference between the two. The Court points out many variations, and remarks that while the differences may seem unsubstantial, to many they are sufficiently serious to engender heated controversy. It is shown that the King James version was a translation by Anglican scholars bitterly opposed to Catholics, since in the dedication of the text the head of the Catholic Church is characterized as "the man of sin"; and the translators hold themselves to be likely to be traduced "by popish persons seeking to keep the world in ignorance and darkness." We are satisfied, said the Court, that neither evidence nor reason will justify us in sustaining the trial court in finding that the differences in the two versions, for a religious purpose, are not substantial.

An undoubted premise, the opinion continues, is that Bible reading and prayer are devotional and a form of religious instruction and, as such, not properly part of any secular curriculum. If indeed, as some good people say, exclusion of those things will make the public schools godless, surely the same argument affirms that their inclusion makes the schools religious. Such things may not trouble the conscience of a young child with no firm convictions, but parents may feel it their duty to protect the child from heresy and so, in keeping it from the public school, may deprive it of any instruction at all. If the child is immature, it is the parents' liberty of conscience and not that of the child which must be the controlling factor.

A Bible-reading case was up in Minnesota in 1927 and, again by a divided court, such reading was there sustained. A strong dissent, however, was entered by Chief Justice Wilson, who asked whether Catholics would be satisfied with a reading which ignored the existence of purgatory, or the Protestants with one establishing such a place as is indicated in the  Book of Maccabees, and whether either reading would not interfere with someone's religious belief s and rights. Use of Bible reading, he held, was felt by Catholics to be a repudiation of their own Church and an endorsement of Protestantism, which was not the sort of "religious liberty" contemplated by the constitution. The feeling of Catholics that Bible reading is a sort of Evangelical religion is, he said, not without some foundation.

In Colorado (Vollmar v. Stanley) the Court overturned a law requiring Bible reading, though it added that no rights would be infringed if unwilling pupils were excused from attendance at those periods. In Louisiana (Herold v. Parish Board) the holding was that, as between Christians and Jews, there was a clear infringement, but that no discrimination could be found between Christians, since the Court would not concern itself with "alleged errors in differing translations." Kentucky followed the Colorado course (Hackett s. Graded School) basing the decision on the question of the sectarianism of the Bible-King James version—and the Lord's   Prayer, and ignoring the question as to whether such reading and recitation affected broad religious liberty.  In Nebraska (Free­ man v. Scheve) Bible reading was declared to be worship and sectarian instruction, and hence prohibited. Similar conclusions have been reached in Wisconsin (Weiss v. School Board)  and Justice Burch remarked that if the wearing of a religious habit constituted such instruction, as New York courts have held, certainly the selection of a disputed translation would seem a preference for the group holding to that translation as a great aid in inculcating and perpetuating their characteristic doctrines.

The answer filed by the school board to Mr. Finger's complaint seems to have especially impressed and influenced the South Dakota Court, for they term it a striking illustration of the bitterness and rancor that can and does arise from disputes between religious denominations.

To sum up, they hold that the state as an educator must keep out of the religious field, especially in common schools where children are immature and the liberty of conscience of parents rather than of children must control. The children in the Meade County case, they said, were not otherwise deprived of religious instruction, and no doctrine of necessity could in any wise be invoked.

The case involves the right of Protestants to read their translation of the Bible and to conduct their form of worship in the common schools, and to compel Catholic children to attend on such services over parental objection. On the broad ground of infringement of religious liberty we must hold such action unlawful.

Mark O. Shriver is a member of the bar of Maryland and a writer on economics and jurisprudence.