Ray of Light at Baptism 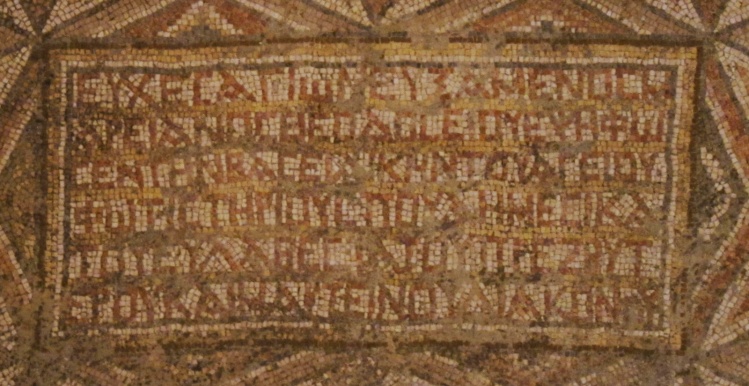 What do you call the name of the room where a person is initiated as a Christian?

(…I’ll wait while you ponder…)

Did you say the word “font” or “baptistery?” Likely you did, and those are the most common words in modern times for the site of Christian initiation. But the ancient evidence tells a different story. I’m currently writing a scholarly article about this underappreciated fact, that the word “baptistery” (Greek baptisterion / Latin baptisterium) was, at least according to the evidence from inscriptions, not nearly as common as other terms. Many others were used, such as kolumbethra (swimming bath) and piscina (fish pond).

But I’m focused now on the word photisterion, a Greek word meaning “place of illumination.” Why did many churches – especially in Syria, Palestine, and Jordan – use this term to capture the meaning of the site of initiation?

Part of the reason likely has to do with the prominence of anointing oil as part of the composite initiatory rite. Oil manifests fire, both physically and metaphorically. It fills lamps for tables and flasks for torches. Figuratively, oil incarnates the spark of “illumination” (photismos), this term itself being one of the primary words for Christian initiation in the East.

For contemporary listeners, ideas of illumination or enlightenment might sound more at home in Buddhism or “new age” spirituality, but in fact, they were at the heart of early Christian initiation. For example, when Cyril of Jerusalem describes those preparing for initiation, he often calls them “those about to be illuminated/enlightened” (photizomenoi). And in Gregory of Nazianzus’s oration “On Holy Baptism” (Oration 40, Epiphany, 381 C.E.), the term “baptism” is interchangeable with “illumination,” to the extent that Rufinus’s Latin translation of this oration usually renders the Greek photismos as the Latin baptismus. In terms of the ritual logic of initiation, oil and fire are inextricable from one another, and they are two primal elements that proverbially “don’t mix” with water, the other primal element of the ritual program. The liminal space of conversion brings together these opposing forces in order to intensify the sacramental experience.

Fire or light also manifests the Holy Spirit at initiation, and in the Syriac traditions especially, such imagery sparkles. Ephrem portrays a general Syrian view: “fire is the symbol of the Spirit; it is a type of the Holy Spirit who is mixed in the baptismal water so that it may be for absolution” (Hymns on Faith 40).

But beyond these general connections, I’m also exploring the early Christian recollection of the light at Jesus’ own baptism. You remember that part of the story, right?

No, probably not. If you’re confused by what I mean, you’re not alone. The canonical gospels describe the voice and the dove, but not a special light. Nonetheless, the presence of fiery light was part of the story known by Justin Martyr in the second century: “As Jesus went down into the water, the Jordan was set ablaze” (Trypho 88). It appears in other sources too, such as Old Latin biblical codices of Matthew: “when he was baptized, a flaming light shone around the water.” More importantly for the interpretation of the photisterion, later Syrian texts pass on this tradition of light at Jesus’ baptism (the Diatessaron, Ephrem, Jacob of Serugh, and more).

It is also possible that the light at Jesus’ own baptism was ritually reenacted by at least some Christians in their own initiations – a kind of anamnesis, akin to the ritual of the eucharist's recollection of the Last Supper. To this point, Ephrem’s Hymns on Epiphany are very suggestive, but the best evidence for anamnesis that I’ve found so far is a story from Egypt.

It’s part of a letter preserved in Coptic from Theophilus of Alexandria to the monk Horsiesios. The archbishop asks the rural monk to come to the city, in order to help him out with the baptismal ritual, since he is having trouble consecrating the water: “Since my fathers they have come to baptize on the appropriate day," he writes, "and while they are praying by the pool, a shaft of light (oy-hrabdos n-oyoein) comes and seals the waters. But this year we have not been worthy to see this.” Theophilus then continues to describe how he had a vision that Horsiesios can help him. As you might guess, Horsiesios does come, and the ray of light does appear.

The overall text has different aims -- about the proper date of Easter -- and this "shaft of light" episode may just be a fanciful "holy man" story. On the other hand, perhaps the arguments about the proper date of Easter are actually the key to understanding the “shaft of light” scenario. That is to say, if a room for initiation was constructed with a hole or oculus in the ceiling or wall, so that sunlight shone through and illuminated exactly the initiatory spot on precisely one day of the year, the connection made by the text makes perfect sense. It would be not only an architectural way of reenacting the ray of light at Jesus' baptism, but also a clever means of securing a specific calendrical date for initiation.

While I’m on the hunt for more evidence... A happy feast of Epiphany, Theophany, Twelfth Night, Three Kings’ Day, the Baptism of the Lord, or whatever our various Christian traditions may call it! (It’s even Christmas in Armenia, but that was a story from another post.)