The Quiet Genius of ‘Rectify’ 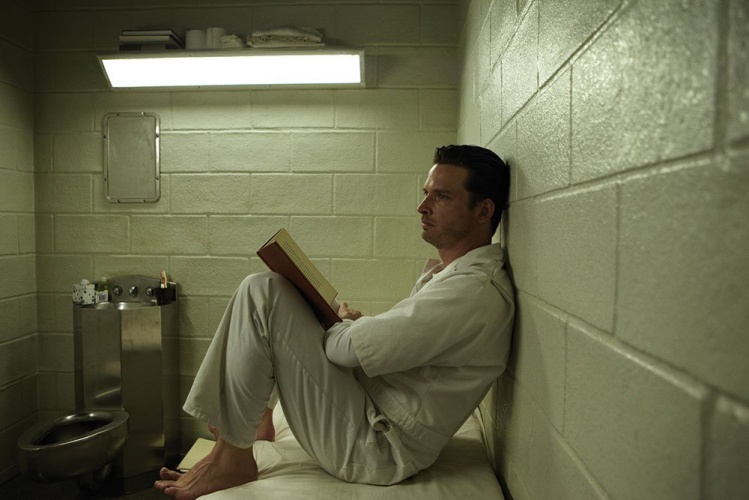 With the proliferation of quality TV these days, it’s not hard for a good series to slip beneath the radar. By occasionally recommending to Commonweal readers a show that may have been overlooked, I’ll do what I can to—well, to rectify the situation.

Set in small-town Georgia, Rectify follows the struggles of Daniel Holden (Aden Young), released from prison after serving nineteen years for the rape and murder of his high-school girlfriend, Hanna. His conviction has been overturned through new DNA analysis, but he hasn’t been exonerated; and as the series opens, he is released into manifold uncertainty—about whether he’ll be tried again for Hanna’s murder, about how family and community will receive him, and even about his guilt. The night Hanna was killed, Daniel was found holding her naked corpse and wreathing it in flowers. Hallucinogenic drugs were in play on that fateful night, and his memories are foggy; he was convicted through the testimony of two acquaintances who themselves may have been involved in the crime, and through a confession extracted from him during ten hours of grueling interrogation. Rectify leaves just enough doubt about Daniel’s guilt to tantalize. We don’t think he did it, but we’re not 100 percent sure. He’s not 100 percent sure.

The show’s nominal plot charts the slow wending of a second investigation into the events of that long-ago night. But the real pull of Rectify lies in its deeply empathetic treatment of what these days is called “reentry,” as Daniel, now almost forty, returns to his family and begins the daunting task of trying to restart a life abruptly cut off when he was a teen. That effort is complicated by mistrust, fear, and the desire for vengeance on the part of many in town—and by the complicating presence of other men who may have committed the crime.

Rectify is the kind of quiet character-driven drama that barely garners sufficient audiences to win renewal, even as a cabal of diehard fans and critics shouts its praises. LA Times TV critic Mary McNamara called it “the first and possibly only television show one can imagine Flannery O'Connor blogging about,” adding that “it isn't just good TV, it's revelatory TV.” The show moves slowly, in its overall arc and in individual episodes; at first you may find yourself wondering if it is too slow. It isn’t, but it takes a while for viewers to gear down to Daniel’s sluggish rhythms. Rectify is paced this way for a reason; its slowness suggests a certain stunned quality, that of a man bewildered by unexpected freedom.

Once you accommodate yourself to this slowness, you may find that the series—as McNamara put it in her LA Times review—gradually becomes “mesmerizing.” Bit by bit Rectify draws you into its somber meditative slowness, a pacing of melancholy, pain and deep doubt. Daniel’s extreme hesitancy and air of tormented inwardness reflect terrible damage; flashbacks to his life in prison gradually reveal the extent of his victimization, through sexual assaults, psychological torments, and isolation on death row. His demeanor is methodical and oddly formal, to the point of seeming stilted. In the opening episode, in a news conference outside the prison, he’s asked whether he’s feeling hopeful about his future. “I had convinced myself that kind of optimism served no useful purpose in the world where I existed,” he answers. “Obviously, this radical belief system was flawed and was, ironically, a kind of fantasy itself.” Then, gravely: “I will seriously need to reconsider my world view.”

I'm struck by how canny it was, and how crucial, for writer/director Ray McKinnon (memorable for his acting turn as Rev. Smith in the HBO series Deadwood), to script Daniel with this baroque way of talking. The rigid, mannered formality of his idiom has multiple functions: giving an impression of agonized introspection; evoking an antique Southernness that clangs against the contemporary setting and casts Daniel as a chivalrous and outmoded kind of man (hinting at his Rip Van Winkle–like removal from life); and most of all, suggesting the awful clash between his orderly exterior and the turmoil raging inside him. He is so guarded, and so exposed. A hyper-deliberate diction is his shield and refuge.

A lovely, sorrowful, beautifully composed work, Rectify is the rare series that actually gets better with every season.
sharetweet

The show’s grip on an audience lies partly in the ambiguity of Daniel’s predicament and our relation to it. On the one hand, he’s a person who has gone through suffering so drastic, it’s all but unfathomable—“I can’t imagine what that was like for you,” people routinely say to him. And yet, at the same time, his struggle for meaning mirrors the one that every human has to engage, albeit in far less drastic and dreadful form.

Indeed that struggle is experienced by every other character in Rectify, via life crises and wounds of one kind or another. There’s Daniel’s mother, Janet (J. Cameron-Smith), depressed and beset by guilt at having failed him. His smart and fiery younger sister, Amantha (Abigail Spencer), who has never swerved from believing in his innocence, devoted herself to helping free him, and as a result has lived a somewhat stunted life. His stepfather, Ted (Bruce McKinnon), who married into the Holden family tire business after Daniel’s father died, and stoically accepts a regent’s role. His stepbrother, Ted Jr. (Clayne Crawford), a swaggering, insecure rooster of a man, who resentfully helps run the family business in Daniel’s stead. And finally, Ted Jr.’s wife, Tawney (Adelaide Clemens), an idealistic and somber young woman who became a born-again Christian, hopes to win Daniel over to her faith, and is perilously attracted to him.

None of these actors was familiar to me, and the quiet, pitch-perfect virtuosity of their work, along with the subtle and muted brilliance of the script, reminds you just how uniquely rich a moment this is for television drama. Aden Young as Daniel gives a majestic performance, full of excruciating nuance. Rectify is a tapestry of small moments in which a facial expression, a change in body posture, a casual remark loom large; watching it is the TV equivalent of close reading. A haunting intro montage is set to a composition by Balmorhea, a Texas-based ensemble that adapts classical instrumentation to country themes, creating a musical gem whose restraint and loneliness match Daniel’s own. That montage includes a shot of Daniel standing in a field, staring across it into a hazy lowering sun. Is he exhilarated by the vision, or blinded?

As an explicit topic, religion in Rectify is limited to the faith tribulations of Tawney. But themes of evil, punishment, love, and redemption form the structuring materials of the drama. Even as the murder investigation drags on, our investigation digs ever deeper into Daniel and his crushed but still surviving spirit. At first, his hesitant forays back into life only amplify his wariness and hiddenness, and we become ever more eager, however fearfully, to have the inner man revealed. It’s a curiosity shared by viewers and characters alike. In one drolly funny scene, Daniel is given a small raise by the manager at the warehouse where he has landed a low-wage job. Expecting gratitude, the man receives only an impassive nod, and sits back, perplexed. “Dan, do you like me?” he asks. Long pause. “I don’t know. I’ve never really thought about it,” Daniel says. “Should I? Should I think about you?” He isn’t being sarcastic; he means it, with the ingenuousness of a man who is relearning the game of conversation. In passing, the show deploys his grave, considered silences as a foil to American extroversion, throwing our default chattiness into clear relief, while never losing track of the fact that there is something fundamentally damaged in Daniel’s stolid bearing.

In an episode early in the final season, Daniel—by now living in a group home with other former offenders—is forced out of his shell by a skilled, tough-love kind of counselor. At last, in clenched misery and with tears streaming down his face, he lays bare his sense of what happened to him in prison, the full extent of his isolation and despair. “When you are alone with yourself all the time,” he says, “you begin to go deeper and deeper into yourself... until you lose yourself.” The bit-by-bit revelation of this total and annihilating loss of self forms the devastating matter of Rectify. As the legal drama moves toward resolution, we remain on tenterhooks about the larger drama of whether a man as wholly lost as this one can ever be found. And if so, how; how can he ever, as the show’s title implies, be made right? There is no doubt what’s at stake. “You have to decide,” says Daniel’s counselor, “whether you deserve a life or not.”

A lovely, sorrowful, beautifully composed work, Rectify is the rare series that actually gets better with every season. After watching the fourth and final season, critic Malcolm Jones in The Daily Beast proclaimed that “Rectify is the best series I have ever seen on television,” adding emphatically, “Not may be. Not might be. It just is.” Channeling Daniel Holden’s voice, I might respond, “I don’t habitually indulge in superlatives, but I can’t say that I disagree.” In the final episode, Rectify’s mingling of theology and therapy culminates in a round of shatteringly beautiful reconciliations and rebirths. You may find yourself stifling a sob. Or not stifling it.

A Heist of the Heart