The New Republic has posted a useful primer on the myriad Iraq reports that have already been issued. It's worth reading before General Petraeus delivers his tomorrow.

As Congress waited anxiously for General Petraeuss testimony, aflurry of well-timed news reports said that he told the White House hecould go along with the withdrawal of about 4,000 American troopsbeginning in January but wanted to maintain increased force levels wellinto next year just like Mr. Bush. Democrats who once demanded a firmdate for the start of a troop pullout immediately started backpedaling.

Withdrawing4,000 troops and dangling the prospect of additional withdrawals is atoken political gesture, not a new strategy. If it proves enough to cowCongress into halting its push for a more robust and concrete exitstrategy, that would be political cowardice at its worst.

We hopethat General Petraeus can resist the political pressure and provide anunvarnished assessment of the military situation in Iraq. He is animportant source of information, of course, but he is only one source and he is not the man who sets American policy. If Mr. Bush insists onlistening only to those who agree with him, Congress and the publicmust weigh General Petraeuss report against all data, including twonew independent evaluations sharply at odds with the Pentagons claimthat things in Iraq are substantially better.

Still more to read: the Washington Post's important front-page story on the surge and its discontents (registration req'd). It's too long to excerpt usefully here, but give it a look. 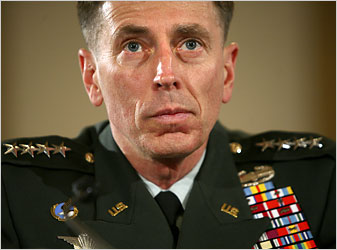 Why are Catholics so uncharitable online?