Politics as an Olympian Endeavor

What Our Olympians Can Teach Us
By E. J. Dionne Jr.
Election 2016
Columnists
Television
Web Exclusive 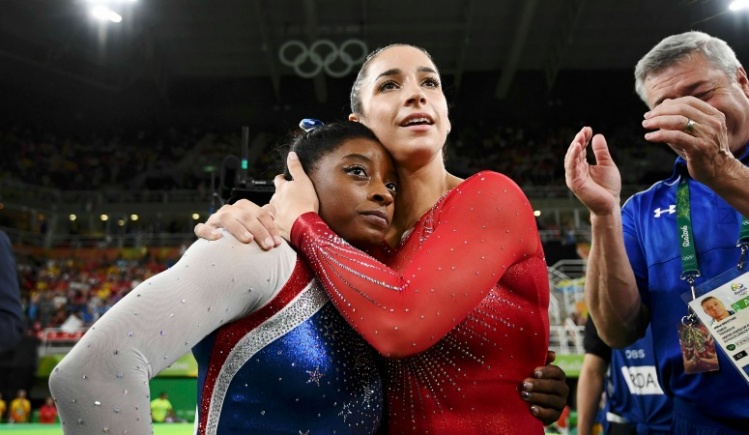 Simone Manuel, Katie Ledecky and Simone Biles will not be eligible to run for president until 2032, although Michael Phelps hits 35 years old in 2020. After watching these Olympians display so many traits we admire—persistence, discipline, grace, goal orientation, resilience, and inner strength—perhaps we should consider drafting one of them some day.

It is both a blessing and a curse that the Summer Olympics happen during the election year. The blessings are obvious. Especially in this campaign, it is a relief to watch a display of American talent that truly brings the country together. It's a nice change of pace to see participants judged by objective standards (with all the caveats that gymnastics scoring invites). It is good to see these men and women achieve because they absolutely earned it.

And during a campaign in which one of the issues is whether the United States has lost its "greatness," a glance at the Olympic medal board suggests otherwise while a look at the members of Team USA suggests how our diversity is part of our strength.

There is, finally, a lesson for political commentators in watching our sports colleagues do their work. I'll always treasure a 2004 NPR essay by the legendary sports writer Frank Deford pushing back against the idea that political writing is too much like sports writing in focusing on the "horse race."

Beyond pointing out that our never-ending election seasons more resemble pennant chases than horse races (which "last about a minute and half"), Deford argued that sports journalists are typically more straightforward in assessing the good and the bad in their realm. There's no pressure for false balance, and he sees sports journalists as better than we political scribes at "probing, questioning authority, not being afraid to criticize."

But Deford also suggested why the straightforward joys of sports we're currently celebrating can actually blind us to the nobility, or at least the extreme difficulty, of politics. He admitted that "it's a great deal easier to shoot your mouth off about whether the coach called the right plays in the fourth quarter than about how to conduct a war."

No kidding. Politics is fundamentally different from other spheres because it is about reconciling sharply differing interests and people with fundamentally different goals and worldviews. As Bernard Crick argued in his classic book "In Defense of Politics," democratic politics is "a great and civilizing human activity" because it's the way in which we seek to resolve our disputes without resorting to violence. "Politics has rough manners," he wrote, "but it is a very useful thing."

In sports, the goals are clear. In politics, much less so—partly because, as the philosopher Isaiah Berlin taught us, there are competing goods in life that are often irreconcilable. Your notion of liberty may be perfectly reasonable but it may well conflict in profound ways with my equally reasonable ideas about equality. We can even disagree on the nature of commitments we claim to share. "We all declare for liberty," Abraham Lincoln said, "but in using the same word, we do not all mean the same thing."

As for Deford's example of a war, we can disagree not only on the tactics required to win it but also on whether it should be waged in the first place.

The 2016 campaign is one of the least uplifting examples of politics in our lifetimes. I place most of the blame for this on Donald Trump, although examples of campaigns that were universally regarded as uplifting are rare. Trump's rise itself reflects a deep cynicism about politics that we have allowed to fester. He praises himself for not being a "politician," even though that is exactly what he is. In his manipulation of resentments and his indifference to truth, he represents the worst traits we associate with the breed.

But Trump is, finally, a symptom of our impatience with and disrespect for the messy but essential work that politicians do—and the fact that we are badly out of practice when it comes to reconciling (as opposed to sharpening) our differences.

I truly hope that our great Olympians consider joining the political fray down the road. But in the short run, we citizens and our leaders need to work as hard at the skills of self-rule as they do at their strokes, kicks, floor routines and overall fitness. We admire them for respecting the integrity of what they do. We need the same attitude toward politics.