‘The Pope Who Would Be King’
By John T. McGreevy
Books
Jewish-Christian Relations 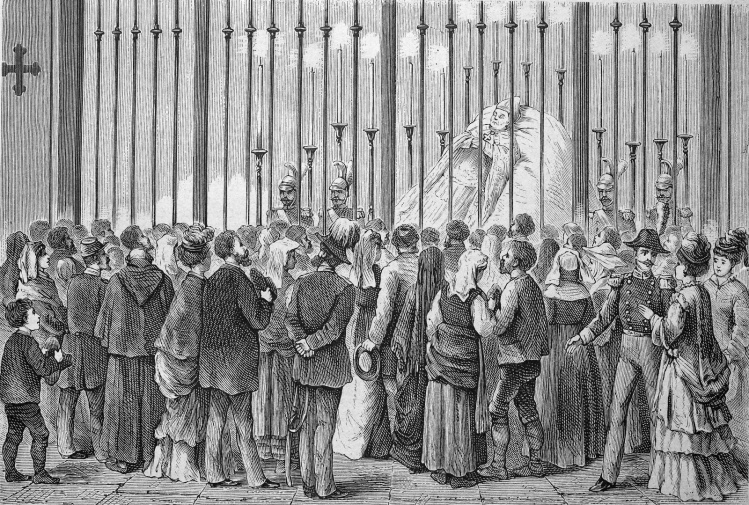 Woodcut, 1881: The corpse of Pius IX is laid out in a chapel of St. Peter’s so that the faithful can kiss his feet through a protective grating. (Historical image collection by Bildagentur-online / Alamy stock photo)

David Kertzer has now written four books with the word “pope” in the title.

It is a surprising trajectory. A longtime Brown University faculty member and former provost, Kertzer trained as an anthropologist, centering his work on Italy. His early work focused on bread-and-butter anthropological topics such as family structure, demography, and ritual. For example, his second book, Family Life in Central Italy: 1880–1910, seemed somberly titled to repel the general reader.

Over the past two decades Kertzer has shifted gears. His decision to study the modern papacy—more precisely the papacy from the election of Pope Pius IX in 1846 through the death of Pius XI in 1939—was part serendipity. The opening of Vatican archives for the period through 1939, accomplished in stages but completed in 2006, sparked a surge of interest in the newly available sources, and Kertzer and his research assistants were among the first to successfully mine them. But the shift also came with a sense of mission. Kertzer’s own family history was intertwined with Roman history, and the city’s Jewish population. His father served as a rabbi and chaplain in the United States military during World War II. He helped bury Jewish GIs killed on the beach at Anzio when the Allies invaded the Italian mainland, and conducted a Sabbath service in Rome’s major synagogue when the city was liberated in early June 1944.

The first product of this new direction was The Kidnapping of Edgardo Mortara (1997), a bestselling account of Pius IX’s condoning of the 1858 kidnapping of a Jewish child in Modena, near Bologna, who had been secretly baptized as an infant by an Italian servant. Because of this baptism, and because it was presumed by officials of the Inquisition that a baptized child should be raised by Christians, the boy was taken away from his family on the order of church officials and effectively raised in the Vatican. There he became a protégé of Pius IX and was ordained a priest. He never returned to the home of his bereft parents.

The kidnapping spurred massive international protests and, in Kertzer’s plausible view, prompted once sympathetic European leaders to abandon their support for papal control of much of what is now Italy. (The New York Times, for example, published twenty articles on the case in one month.) So too did it catalyze an international Jewish community into more vigorous defenses of Jewish communal and human rights.

Kertzer’s account is fair to all involved, as he darts from the anguished parents to combative newspaper editors and the recalcitrant pontiff. Contemporary Catholic defenses of the kidnapping now make for discouraging reading, ranging from claims that the parents should never have employed a Catholic servant to the declaration that the young boy’s evident satisfaction with his new situation—recall that the boy was  six years old when taken—justified strict observance of loosely enforced laws. (That a priest employed at a major seminary would justify the kidnapping in a recent article in First Things suggests the persistence of Catholic obscurantism on the topic. Readers should look at historian Kevin Madigan’s lucid vivisection in the February 23 issue of Commonweal.)

Kertzer the anthropologist shines in The Kidnapping of Edgardo Mortara, reading court documents to superb effect in order to better understand the family dynamics in the Mortara household and among the Catholic servants they employed. Steven Spielberg has recently agreed to direct a film version of the Mortara saga, working from a screenplay by Tony Kushner, his collaborator in the Oscar-winning Lincoln, and it will be interesting to see the visual vocabulary they bring to this troubling episode.

Subsequent volumes quickly followed, with ever more emphasis on the papacy. Kertzer’s tone also became more confrontational, as suggested in a string of hyperbolic titles: The Popes Against the Jews: The Vatican’s Role in the Rise of Modern Anti-Semitism (2001); Prisoner of the Vatican: The Popes’ Secret Plot to Capture Rome from the New Italian State (2004); The Pope and Mussolini: The Secret History of Pius XI and the Rise of Fascism in Europe (2014).

The last volume received the Pulitzer Prize for biography, and it displays Kertzer’s strengths as a scholar and writer while suggesting some of his fixations. Brilliantly researched—in both Vatican and Italian state archives—it portrays the troubled relationship between Pius XI and Mussolini, both coming to power in the same year, 1922, and each initially seeing the other as a supporter of his larger goals. Famously, Pius XI signed a 1929 concordat with the fascist government ensuring, for example, that Catholic doctrine would be taught in Italian public schools. Only in the late 1930s did the guarded alliance collapse, over Mussolini’s alliance with Hitler and Pius XI’s frustration with racial laws and increasingly bold fascist attacks on the church.

The difficulty is that Kertzer’s focus on the papacy prevents him from widening his angle of vision.
sharetweet

Revelatory in The Pope and Mussolini is the anti-Semitism displayed by many leading church officials, notably the conviction that Jews served in the vanguard of the Soviet effort to destabilize the Christian West. The Jesuit journal Civiltà Cattolica published in 1922 an article ominously titled “The World Revolution Among the Jews” and a leading Italian Jesuit fumed against “the Jews, the Protestants, the Masons, and the Bolsheviks.”

The difficulty is that Kertzer’s focus on the papacy prevents him from widening his angle of vision. The saturation of European culture with anti-Semitism in the early twentieth century, for example, is now much better understood, as is its infectious effect on not just Catholicism but much of European Protestantism and institutions ranging from the military to major political parties. Across Europe and North America, and not simply among bishops, fears of Bolshevik advances merged with exaggerated claims of Jewish influence on Soviet foreign policy. Now, too, we have a firmer grasp on the “revolution”—to borrow Berkeley historian John Connelly’s phrase— in church teaching on the Jews that occurred between the 1930s, when Catholics routinely identified Jews as obstinate descendants of the murderers of Christ, and the Second Vatican Council, where Nostra aetate described the “common patrimony” and spiritual ties binding Jews and Christians.

Almost none of this appears in Kertzer’s narrative, and by focusing so single-mindedly on the Vatican he risks becoming the mirror opposite of the church historians he once criticized for obsessing over ecclesiastical intrigue. Popes, bishops, and Vatican bureaucrats become the church, a position rather like assuming that the presidency constitutes American politics. If scholars in the 1950s and 1960s too easily dodged questions about Catholic complicity in the horrors of twentieth-century history, Kertzer moves in the opposite direction. When he ends one chapter with a Vatican cardinal unsuccessfully requesting that the German ambassador to Italy protect the city’s Jews, and begins the next with the phrase “While the Jews were being taken to their deaths in Poland,” he has entered the realm of polemic.

In this context Kertzer’s latest effort, The Pope Who Would Be King: The Exile of Pius IX and the Emergence of Modern Europe, is predictably accomplished and predictably disappointing. Here Kertzer sketches the dramatic events of the 1840s in Rome, where a rebellion against papal rule forced Pius IX to flee the city until French troops quashed the rebels and allowed the pope to return, a prelude to the collapse of the Papal States in 1870 and the formation of the Vatican city-state and the current boundaries of the Italian nation state.

Much of the narrative is gripping, with marvelous set pieces on the 1848 assassination of Pellegrino Rossi, briefly a leading minister for Pius IX’s government, by opponents of papal rule, and on the battles between supporters of the Roman Republic and the French army on the outskirts of Rome.

But what is the larger significance of these events? Here again, cliché. “Out of Pio Nono’s desperation,” Kertzer tells us, “the modern Roman Catholic Church was formed.” The nineteenth-century papacy seemed a “powerful justification for the inequalities that left the masses under the thumb of the wealthy few.” The revolution against the papacy marked a transformation from “medieval theocratic ways to modern times.”

Surely a scholar as gifted as Kertzer can develop a line of analysis more compelling than Enlightenment and modernity on one side and Catholicism on the other. Catholics became moderns, too, after all, and trains took pilgrims to Lourdes just as bishops now send text messages to Vatican officials. A Catholic suspicion of democracy and civil liberties, notably freedom of religion and freedom of speech as they emerged in the nineteenth century, ill prepared Catholic leaders for the challenges posed by fascist regimes in the twentieth. But the same hesitations about individualism made Catholics unusually alert to the destabilizing effects of industrial capitalism on families and communities, and protective of parental rights in an age when decidedly modern states and scientists sponsored eugenic experiments. At the same time, some of the most “modern” Catholic theologians of the early twentieth century, notably Germany’s Karl Adam, a significant influence on Joseph Ratzinger and other luminaries at the Second Vatican Council, proved more susceptible to racial stereotypes about the Jews than otherwise hidebound contemporaries.

Little of this complexity is captured by Kertzer’s awkward description of a Catholicism evolving away from “medieval fundamentalism.” Among the pleasures of The Pope Who Would Be King is the unexpected appearance of Alexis de Tocqueville, as an exasperated French foreign minister attempting to persuade a charming but unpredictable Pius IX to establish a constitutional government. One wonders if Tocqueville mentally compared the Catholics he negotiated with in Rome with those around him in France. Or if he recalled the Catholics he met in the United States during his famous 1831 visit, when he pondered the paradox of Catholics being among the most “democratic and republican” citizens of the young nation.

Presumably Tocqueville would share Kertzer’s disdain for the current partisans of Pius IX, now attempting, remarkably, to have him canonized. Let’s hope Pope Francis agrees with Kertzer on that question. But let’s also hope that Kertzer’s next volume prompts a more sophisticated conversation about a Catholicism that despite its “medievalism” survives in the twenty-first century as one of the globe’s most important institutions, even as many nation-states, including Italy, struggle to sustain a common identity once thought secure.

The Pope Who Would Be King
The Exile of Pius IX and the Emergence of Modern Europe
David I. Kertzer
Random House, $35, 512 pp.