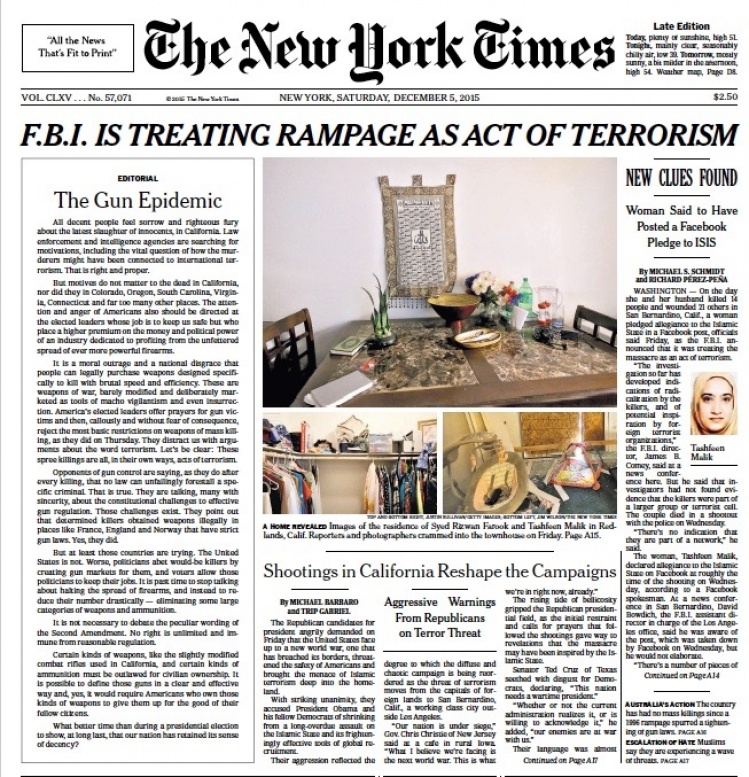 As the implications of the San Bernadino attack further sink  in, it's been an interesting week of front pages in New York. For the first time since 1920, The New York Times has run an editorial on its front page. The paper decided to drop the usual distinction between news and opinion to front with today's editorial on "The Gun Epidemic," which declared, "It is a moral outrage and a national disgrace that civilians can legally purchase weapons designed specifically to kill people with brutal speed and efficiency."

On Thursday, the Daily News "wood" was  "GOD ISN'T FIXING THIS" -- an attack on politicians such as Rand Paul, Ted Cruz, Paul Ryan and Lindsey Graham whose tweeted responses to the San Bernadino massacre were that their thoughts and prayers went out to the victims.  Elected officials who could actually do something about gun violence were offering only "platitudes," the News charged. Meanwhile, the Post ran with MUSLIM KILLERS after the slain assailants in the San Bernadino attack were identified as Muslims. On Friday, the News ran a cover that lumped NRA chief Wayne LaPierre with a group of accused mass murderers. All were terrorists, the paper contended.

Highly opinionated covers are nothing new for the News and the Post, but that's not the case for The Times, which takes more seriously the traditional divide between news and opinion. All of these covers have gotten a lot of attention, and that would not have been the case if the same material had appeared only on the home pages of the papers' websites rather than on page one.

The News might keep that in mind, since there is much talk that it will soon abandon its print edition to focus solely on its website, which has excelled at the not-so -xcellent task of aggregation -- recycling others people's work in its tabloidy style. A web-only News won't get the same buzz the paper is now receiving for its front pages.

For all that is said about the fading of the MSM, they still have a lot to say about the news you receive. It's true that their work may be stolen --  I mean aggregated --  or twisted by commentators major and minor. It's true that they may be despised by large segments of the public. But they are still setting the agenda, in many ways, for the discussion.