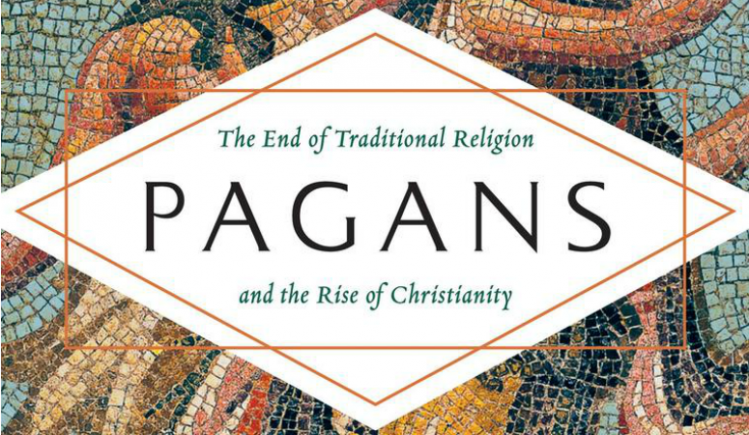 The process by which an imperial world supported by Greco-Roman religion gave way to one dominated by Christianity has been treated many times and from many different perspectives. O’Donnell’s distinctive point is that “paganism” is entirely an invention of Christianity—a definition of the “other” that paralleled fourth-century Christianity’s own ideal of unity (see the Nicene Creed). Before those outside of orthodox Christianity were defined as “pagans,” there had only been, in O’Donnell’s term, “traditional religion” of a highly variegated sort. His claim is, so far as it goes, manifestly true: practitioners of Greco-Roman cults did not call or conceive of themselves as “pagan,” nor was there a singular structure of belief or practice that could be called “paganism.” But O’Donnell’s point also immediately reveals his analysis as one shaped by the academic study of religion and ritual popularized by the University of Chicago historian Jonathan Z. Smith. Consequently, the first part of the book seeks to display the traditional character of Greco-Roman religion, treating side by side such topics as public festivals, polytheism, prophecy, sacrifice, and religious skepticism. O’Donnell knows his way around the sources, translating most of them himself, and provides many good individual observations in what is basically an introduction to Greco-Roman religious phenomena. Especially in this section of the book, though, the author’s tone is distracting: his diction vacillates between scholarly and pop-sophomoric (“frenemy”?), and—in accord with contemporary fashion—he cannot see any religious impulse of Augustus as anything but politically self-aggrandizing. It is not at all clear whom O’Donnell regards as his readers. Scholars will not learn much new, and beginners are liable to be put off by a fairly consistent note of distance from, even disdain for, the religious phenomena O’Donnell describes. His treatment of sacrifice, for example, combines the contemporary abhorrence for the slaughter of animals with a complete lack of sympathy for the ancient instinct that led people to destroy their most prized possessions to please or appease the gods.

O’Donnell’s choice of ancient authors is sometimes surprising, revealing perhaps the tastes more of a trained classicist than a religionist. Treating Cicero in detail nicely sets up the author’s later comparison between the Latin orator and the Christian rhetorician Augustine—quite a good and convincing comparison—but if O’Donnell’s purpose was to show the religious impulses of aristocratic Romans, the Discourses of Aelius Aristides or Dio Chrysostom, and the Moralia of Plutarch, would have provided even greater insight.

The second half of the book follows in form O’Donnell’s argument that Christianity had a historical character lacking in traditional Mediterranean religion: Christians simultaneously saw themselves as something new with respect to the ancient covenant with Israel while also displacing “paganism.” The presentation here is therefore straightforwardly chronological. O’Donnell leads us through Diocletian and company, to Constantine and sons, to “the first Christian emperor” Julian—the title is typically meant to provoke—to the decisive Christianization of the empire under Theodosius I, and the rapid disappearance of paganism. For even casual students, this is fairly well-known territory, but O’Donnell proves a deft and reliable tour-guide. His insistence on the process being gradual rather than instantaneous is a valuable reminder. He concludes with a sustained and substantive reading of Augustine’s City of God as a deliberate and self-aware imitation of Cicero’s Laws. The jokiness that marred the first section of the book is here less evident. It is replaced, unfortunately, with a fussy pedantry applied to ancient sources and received scholarly opinions alike. O’Donnell gives so much attention to getting small points right that he comes close to obscuring the sense of historical sweep that he wants readers to grasp.