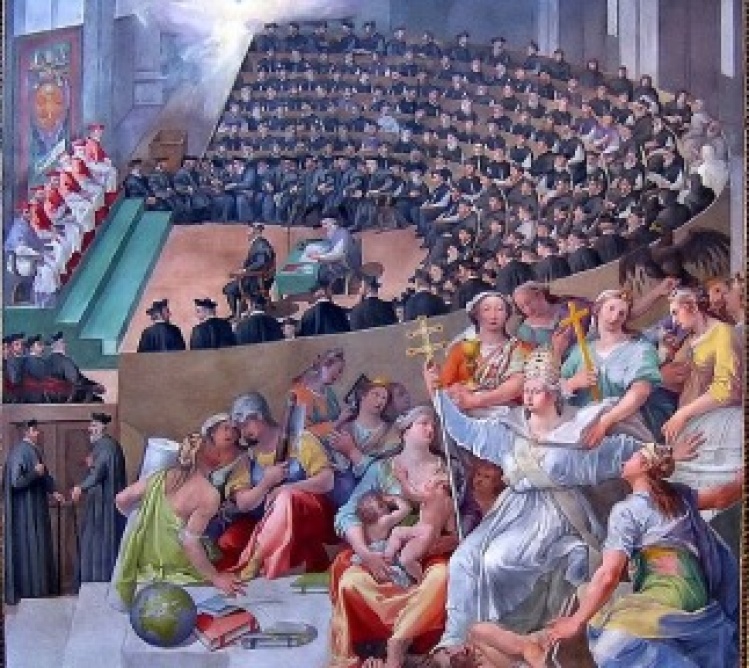 Quis custodiet ipsos custodes? Who’s guarding the guards? It’s a question that exasperated members of a credibility-challenged organization have long asked about their leaders. How can we trust that the people who got us into a bad situation can get us out of it? Since the clergy sexual-abuse scandal broke in Boston over a decade ago, it’s been a common question for the U.S. church, and now it’s gone worldwide.

The universal church just witnessed an ABC vote in the papal conclave: If Italian press reports of the pre-conclave meetings are credible, the cardinals wanted “Anyone But a Curialist.” Now Pope Francis seems poised to address the question of reforming the Vatican’s bureaucracy with his appointment of an eight-cardinal commission charged with making recommendations to improve the Roman curia. Only one of the appointed cardinals works full-time in the curia, and several have bruises from prior tangles with Rome’s headquarters. Bringing outsiders in for a close look seems to be the point, but it’s not the first time this has happened.

Soon after his election as Pope Paul III in 1534, the former bad-boy cardinal Alessandro Farnese (he’d gotten his red hat via his sister, Giulia Farnese, who was papal mistress to Alexander VI) named a reform commission from outside Rome just as Pope Francis did in April. The result of their study was a long memo called the Consilium de emendanda ecclesia, or Counsel on Reforming the Church, which targeted poor management, unseemly examples, and scandals at the church’s leadership levels. “For how can this Holy See set straight and correct the abuses of others,” the Consilium asked, “if abuses are tolerated in its own principal members?”

Paul III deliberately chose reform-minded men, mostly from outside Rome. Among them we find the impressive Reginald Pole from England, a friend of Erasmus named Jacopo Sadoleto—who would soon engage Calvinists in dialogue—and the open-minded Gasparo Contarini. Naming those commissioners placed the prestige of the papacy behind ideas of reform that had been bubbling for decades but had not been allowed to reach a boil—until Martin Luther posted his 95 Theses in 1517. Though late to the game, the commission’s work would exercise an influential role in changing the climate in Rome from playing blind defense to understanding the need for honest self-criticism and vital reform in church governance.

What’s striking in the Consilium is its straight talk. The report was called “a compilation of those diseases and their remedies” directed at “the renewal of the church of Christ.” It labeled simony and nepotism, especially in the papal court, a “Trojan horse” from which “so many abuses and such grave diseases have rushed in upon the church of God that we now see her afflicted almost to the despair of salvation.” The commissioners made recommendations that, over time, found their way into the canons of the Council of Trent (1545-1563). The Consilium notably called for improved screening, training, and oversight of the clergy, who should never be absent from their flocks. It singled out pardoners, familiar to readers of Chaucer’s Canterbury Tales, who sold indulgences and even absolution. Such men “deceive the peasants and simple people and ensnare them with innumerable superstitions.” They also wanted to restrict dispensations allowing priests to marry, “especially in these times when the Lutherans lay such great stress on this matter.”

In words that Luther himself could have written after his disillusioning visit to Rome in 1510, the committee lamented “the hatreds and animosities of private citizens” there as well as the “harlots [who] walk about like matrons or ride on mules, attended in broad daylight by noble members of the cardinals’ households and by clerics” in a city revered as “the mother and teacher of the other churches.”

Someone in Rome leaked the Consilium to Luther, who published it in German a year later, complete with biting comments in the margins. It was hard for Roman Catholics, including those leaning toward reform, to admit agreeing with the commission’s verdicts when Luther himself said they were on target—even as he doubted they could work. In his own preface, Luther dismissed the commission’s effort: “They cannot let themselves be reformed, and do not want to be.” Why? “If all this filth were to be shaken up in a free council, can you imagine what a stink would rise?”

When the committee began with a statement of thanks to God for Paul III’s election and leadership, Luther commented, “Dear me, how seriously the holy see takes this matter! It is too bad that no one believes these scoundrels and liars any longer (providing that anyone could feel sorry about that).” When the Consilium called for popes to stop profiting from their offices and for pastors to live in their parishes—simply—Luther scoffed, “Let that one be kept and then see what becomes of the pope, cardinals, bishops, priests, monks, and all their splendor. But they have to talk like that, to make people think that their reformation is in earnest.” He asked, “Shall the cardinals and prelates give back the parishes they have stolen? That would be dreadful! But what harm does it do to say it, so long as one does not mean it?” And when the Consilium hit close to one of Luther’s favorite targets by criticizing indulgences, he ticked that one off the list: “That has already been reformed by Luther.”

What did the Consilium accomplish? In the short run, not much, especially given its high-flying optimism and lack of a well-thought-out plan of specifics. The memo was more a description of disheartening problems than a prescription of systemic solutions. The reform commission pointed out that the church’s problems flowed from the top, so if the papacy admitted that it needed to be reformed, it was also admitting that it had become deformed—and wasn’t that just what some Protestants and earlier reformers had been saying all along? Luther seized on that point: “If [the pope] should now be charged with error in one little point, then all his articles would become suspect.”

As it turned out, Paul III failed to vigorously pursue the reform commission’s recommendations; the passive-aggressive behavior of curial resistance prevented a major overhaul. But a critical first step had been taken—and in the right place, Rome. With the Vatican’s problems described at length and openly, an attitude of reform was in the air. Even more important, these ideas had blown in from the church’s edges right into her central office. A quarter-century after the Consilium, the church was on the path to implementing Trent. Within a few generations, she would enjoy better bishops and more able priests, along with structures for improved catechesis and a lively devotional life among the laity.

None of that happened as fast as reformers would have liked. It took time, but in the church, that’s how change happens.