From the November 17, 1967 Issue
By Philip Berrigan
From the Archives 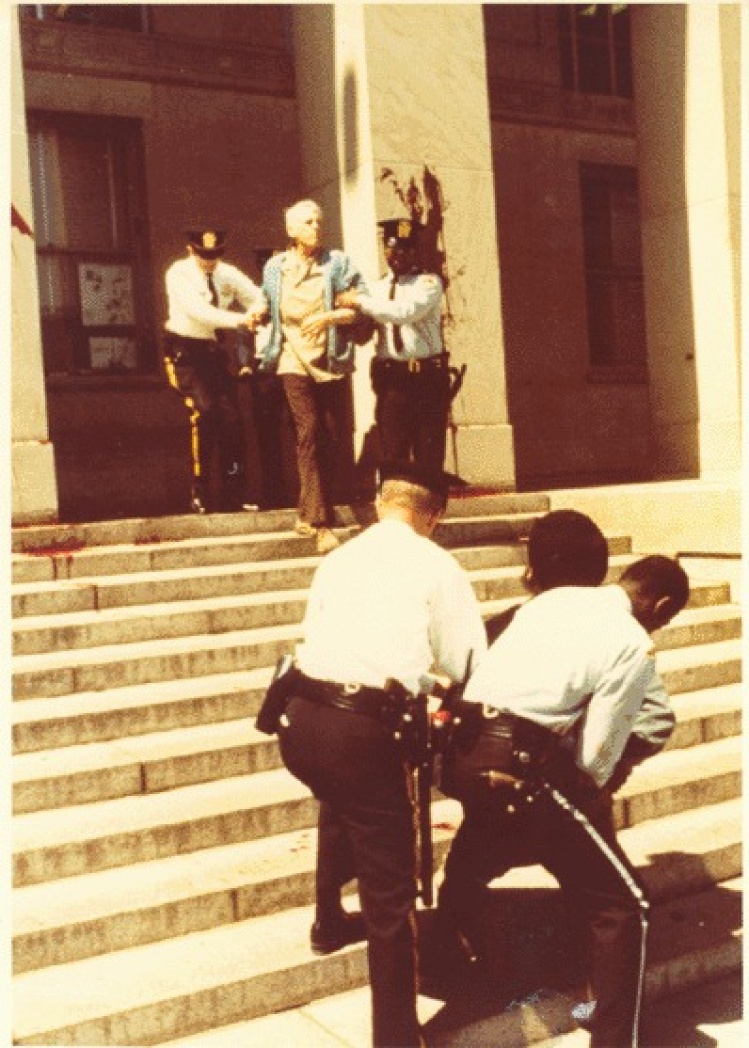 "They're killin' us with kindness." Obviously they were. True, we encountered signs of contempt and fury at what we had done—draft board personnel flinging back at us the New Testament given them following our action, a police photographer miserable with his anger, slamming his camera case about, discreet hisses of "sick" and "ridiculous" from U.S. Marshals.

Nonetheless, kindness was the rule. That vast abstraction called the "system" was adjusting to us. This was no time to fight us, and it could not join us—it would rather work patiently and steadfastly to have us rejoin it. Later, it would have more cards and would treat us as it willed. Now was the time to buy us with sweets, to dull us in security and a sense of false triumph, to blunt the edges of our protest with civilized tolerance.

And so, people studied us with combined curiosity and pity, as animals trapped by their own foolishness. F.B.I. agents treated us with studied and dedicated courtesy. The Federal Commissioner wheedled us with a recognizance bond of $1,000. The warden of Baltimore City Jail put us in the infirmary whose spare fixtures were none the less comfortable and clean. Nurses, inmates, visitors fought to comprehend the added nonsense of our fast. Somehow, their attitude said, you have slipped from your slot, let us help you find your place again.

People were sometimes absurd, sometimes incongruous, as people often are. The draft secretaries screamed at us, and one woman, with a misdirected courage, barred the exit following our blood-pouring on the files. (We had planned to wait for arrest.) We had feared grievously for their hysteria, and had thought that panic among them might well sponsor injury. But order restored; and the police in charge, several secretaries returned to their desks, there to ponder us with white faces and anxious eyes. Later, in the U.S. Marshal's jail, we were caged with a black man on a "bum rap" of 15 years. He was appealing his case, and prepared himself on his knees, praying audibly. A Negro marshal, of the devoutly Catholic type found in Creole New Orleans, saw me, and in pain muttered, "I never thought I'd see it happen."

To be sure, my identity and role cause bewilderment and misgiving—not just to Catholics, but to very nearly everyone. They watch me closely for signs of insanity or idiosyncrasy. They would be profoundly relieved if I fell upon the floor laughing wildly, or took running starts headfirst into the wall. But when I prove that I am a nice guy, calm and in my wits, they conclude that my hang-up is circumstantial. I have a "thing" on draft files. Yet I'm a priest, so the misgivings remain. What do they expect from me? Assuredly to tell them that things are right and secure—that present  disturbances are temporary and marginal; that the Church really tells what is right and wrong; that God favors our mythologies as true and real. To be a priest is to rationalize the peeling veneer of Americanism; to assure people that it is essentially moral and best, and that time and luck will prove this country right. Deportment and role call for this, namely God and country on country's terms.

Yet I have not done this, and there's the rub. By a swift and irrational action, role and theology are left suspended, and a lot of people with them. Is this good? How is one to know? It seems a condition offering more hope than the present, stylized death. Once again attitudes slip into simple pleasantries—I am unsettled about this war, or, I have access to totems that most priests aren't talking about.

Tom Lewis (a fine artist and friend who is here with me) observed yesterday that there was more living death in those draft offices than here in jail. It is, I think, an apt observation. At the Customs House, officials curry the files as a groom does a race horse; they are housed and protected better than the poor; yet secretaries and folders have this in common—they are the first gears in the machinery of killing and death. The young men behind the hideous simplicity of paper and file cabinet have little choice but to climb into the gear box and help drive the wheels. One should be surprised if the secretaries did not fling back the Gospels.

Here one encounters active interest, friendliness and understanding from the inmates (mostly black). They tell of exorbitant sentences and delayed trials, of no counsel and no money. There is no other language to use since they do not realize that whatever they have done, be it addiction, burglary or assault, it is part of the immemorial protest of blacks against a society which is powerless to accept them as people. Before, protest was fasting, malingering or the terrible vengeance of Nat Turner. Today it is crime, James Johnson (one of the Ft. Hood three), Carmichael, Newark and Detroit.

So we protest together—if only we had more time to tell the brothers this. For a country which cannot welcome its black people, cannot leave the Vietnamese alone, cannot temper overseas economic greed, cannot but slide from the Bomb to the ABM systems, cannot but talk of law and order. Such premises have a certain fluidity and dependence, one does not buy one of them without buying all.

The chaplain has just brought in press reports. We are surprised by the furor we have caused, and by the honesty of both the Times and the Sun accounts. Press manipulation of the Washington Mobilization is too fresh in mind to offer us other than an ambiguous and puzzling contrast. Perhaps the audacity of our action has a disarming effect, perhaps our waiting for arrest and present fast has helped. But most of all, I suspect, the Lord has once again suggested his dominion through a frightened and vulnerable little handful of peace people, who are more afraid of dishonesty, injustice and murder than they are of insecurity and condemnation.

The bread is rising—it's an old  French Revolution slogan. And people are moving from dissent to resistance. Torres and Guevara and Malcolm X may be dead, but they have done their good (or harm, if you will). But one thing is getting clearer—people must have the power to be people, or they will seize it. Either case can well be called revolution.

Father Philip Berrigan, S.S.J, a Josephite  priest active in civil rights and the peace movement, was recently arrested for pouring blood into the government's draft files in Baltimore.