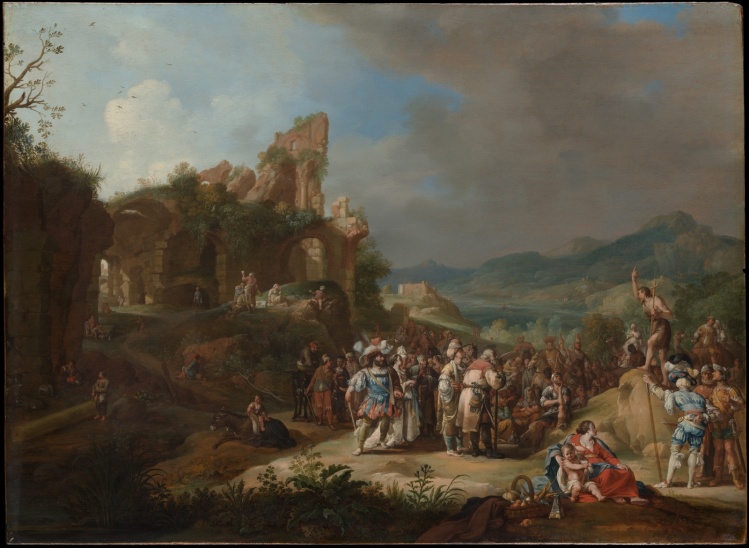 Bartholomeus Breenbergh, “The preaching of John the Baptist,” 1634 (Metropolitan Museum of Art)

Soon after turning eighteen I got my driver’s license, started a job, and bought a car—a supercool little Mini (definitely not the status symbol it is today). One weekend not long after, a few friends and I headed out of town to a campground north of Sydney called Wiseman’s Ferry. I’m not making that name up. The lead-up to the trip was full of excitement. We’d be exercising the “freedoms” that come to you at eighteen in Australia, not just getting a license to drive but also getting to drink legally. So we spent that weekend doing a lot of the things people do at that age, and maybe a few things you shouldn’t do at any age.

I distinctly recall the drive home. To get in and out of the campground you had to ford a shallow river crossing that Australians call a causeway. As the car came up out of the water on the homeward side, I had the clear thought: “There has to be more to life than this.” I remember it so well because it was a moment that changed the direction of my life. Soon afterward I got involved in the local parish youth group. I found the experience very meaningful. I read a lot. I started going to Mass daily. It all led to the seminary and eventually ordination.

Two of the friends from that weekend at the campground did not make it much beyond their twenty-first birthdays. One died of an overdose in India. The other, my childhood best friend, ended his life on the kitchen table in a lonely apartment in a run-down part of Sydney. I can still clearly see his face, his long black hair, his lanky frame scrunched up beside me in that little Mini as we crossed the causeway.

I thought of this time in my life when I read the Gospel for last Sunday (Mk 1:1–8), in which we learn about John the Baptist. Not only because in the 1970s many of us looked like John the Baptist, but also because it made me ask what was going on in John’s heart and mind. What led him to abandon his previous life for a life in the desert? Eating wild honey and locusts, wearing camel skins—that must have been unusual even in his day. What led him to change direction? What moved him? What was “the more” he was looking for?

Perhaps it’s hyperbole, but the Gospel says, “The whole of the Judean countryside and all [emphasis mine] the inhabitants of Jerusalem were going out to him.” What did they see in him? What were they looking for? What deep yearning was stirring in their hearts to change directions?

When over the years I’ve looked back on that moment crossing the causeway, it now seems obvious that the thought should come to me just as I emerged from the river. In theology, psychology, architecture, and in all manner of disciplines, causeways represent liminal phases, moments when we pass from one reality to another. They are thresholds that signal and facilitate a significant transition. Think of Varanasi on the banks of the Ganges, or indeed of the River Jordan and baptism itself.

What I think and feel, my emotions, can help me to understand who I am as a particular creation of God’s love.
sharetweet

Until about eighteen months ago, I’d served for five years as campus minister at Regis High School in New York. That experience helped me become deeply familiar with Ignatian spirituality, a key component of which is giving serious attention to our human desires. The teaching arises from the personal experience of St. Ignatius in vocational discernment. St. Ignatius, by his own accounts, had a wild youth. But after a near-fatal battle wound he suffered as a solider, he spent a long recuperation thinking and reflecting on his life. He discerned that underneath the more superficial desires of his “wild youth” lay a deeper desire to imitate the lives of the saints—the saints he was reading during his recovery. He felt a movement of the heart for a heroic life of generosity and service. Here was the liminal moment when he said “yes” to God and crossed over the threshold into a new way of living.

I raise all this in the hope that you might take a moment this Advent to get inside your own story. To pay attention to your deepest desires, the yearnings of your heart. Every human heart has the desire for a life of meaning and love. I suspect we do not always pay enough attention to our desires because we are afraid that if we did we might go astray or lose direction. But Ignatian spirituality encourages me to discern who I am by paying close and thoughtful attention to what moves my heart and imagination. What I think and feel, my emotions, can help me to understand who I am as a particular creation of God’s love. Not paying attention to them can lead to a stunted, shriveled life. This is not what God wants for us.

Others may have heard the voice of God in thunder and burning bushes, but that has not been my experience. What I know from experience is that at times God reveals his will to me in my deepest, truest, and holiest yearnings and desires. This is what I have come to believe happened at Wiseman’s Ferry that Sunday I crossed the causeway. I had a taste of “freedom” that I thought would make me happy, but having experienced it I felt empty. Underneath those superficial desires I began to recognize a deeper desire.

John the Baptist did not know exactly what he was doing or exactly what was coming when he stepped into the desert. But he listened and responded to those stirrings of his heart, and this placed him in the position to recognize Christ when He appeared. Of all the people ever born, it was John the Baptist who directly prepared a way for the coming of Christ.

I believe it is the same for us. What I encourage during this Advent is to pay attention to our deepest desires. To take some time to do something practical. To spend some time sitting with these thoughts. What is that heartfelt sense in me? What is it I really want? What would I do if I had the freedom to do it? What moves me? What am I yearning for? What does God desire for me?

As I used to say to the students at Regis, “Who I am is not incidental but instrumental.” And learning who I am is how I come to understand myself as a unique creation of God’s love. Listening to our deepest and truest desires is how we acknowledge God’s speaking to us. Paying attention to our deepest desires can help us discover who we are and what God’s vocation is for us. We ignore these movements of the heart at our peril.

Adapted from a homily delivered December 6, 2020.

Mark Lane, CO, is pastor of the Oratorian Church of St. Boniface in Brooklyn, New York.