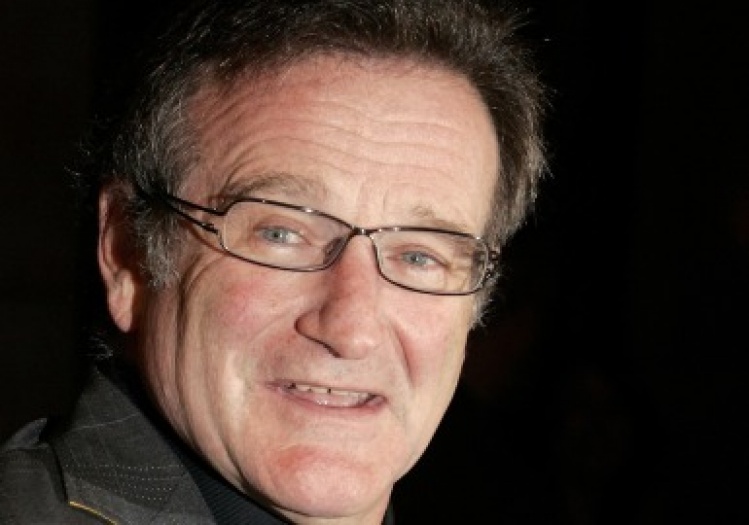 A touch of dread descends every time you click onto the Times website and see a front-and-center head shot that instantly tells you, this person has died. But I had zero expectation of seeing Robin Williams there. Not him; not yet.

It’s especially unsettling when a comedian commits suicide. Williams made his first big splash playing an alien from another planet; and in a way the comedian is a voyager on behalf of us all, into realms where off-kilter perspectives and devastatingly funny insights are weapons in a cosmic battle against the forces of the not-funny—both in the world and inside oneself. More than most comedians, Williams exemplified the cliché of the funny man being an inverted sad man. His m.o. in performance was to mine a pathological condition, mania, and turn it into comic gold. His underlying emotional default was melancholy. Once he started making movies, many of them seemed chosen to announce that he was about more than comedy. He played characters who were villainous (Insomnia), or twisted (One Hour Photo), or dedicated and serious (Good Will Hunting, Awakenings) or tragic and sorrowful (Moscow on the Hudson, Jakob the Liar). In some of these latter films Williams adopted a certain facial expression—a distant stare, eyes almost seeming to brim with tears, mouth set in a rueful, wise smile. His effort to be something other than a comedian always struck me as different from that of, say, Woody Allen. Allen, resentful over being seen as a mere funny man, wanted to prove to us that he had Bergman-like seriousness. But Williams seemed to need to do serious dramatic work for himself.

Still, the core of his singular gift remained his irrepressible, crazed riffing. He would get going, powering up through the gears into comic overdrive, where one idea would tumble into another in rapid-fire association. I think it took a lot out of him. The motor was revved so high. This wasn’t a careful, Jerry Seinfeld-like comedy (not that there’s anything wrong with that!), where you painstakingly refine your comic bits and timing. It was wild, freewheeling associational brilliance, the synapses on fire. Some of Williams’s films were designed to showcase this virtuosity, like Good Morning Vietnam. Others were not, but he often got it in anyway.

Williams notably lacked the scathing misanthropy that fuels comics in the Lenny Bruce mode. If he took anyone down, it was usually himself—including mordantly funny commentaries on his abuse of drugs and alcohol, or “weapons of self-destruction” as he called them (“Yum, cocaine, what a wonderful drug! Anything that makes you paranoid and impotent, give me more of that!”). As the obituary in the New York Times noted, his irreverence was “legendary and uncurtailable... and yet he never seemed to offend.” The obit recalled the time, on a stage in London, Williams called out to Prince Charles and Lady Camilla Bowles in the audience: “Chuck, Cam, great to see you... House of Windsor, keepin’ it real!”

Catholics with a functioning sense of humor could chuckle at his takedowns of religion. (Williams was raised Episcopalian, which he wittily described as “Catholic Lite—same rituals, half the guilt.”) On the Vatican and its condemnation of homosexuality, he chided the pope: “Time out! You’re dressed like Freddy Mercury’s stunt double!” On the problem of priestly celibacy he imagined the torment of having to listen to people confess their erotic misdeeds, improvising a droll confessional colloquy: “Bless me father, for I have sinned.” “Yes, my son?” “Last  night I had sex with two Thai twins, a Slip ‘n Slide, a diving helmet, and a ferret.” (Pause) “Could you say that more slowly, my son?” Here was a comic genial enough to get you to laugh despite, and even at, your own beliefs.

Williams was one of the very few actors who could make me stay up to watch late-night talk shows. You could always count on him to do more than grimly market his latest movie. I recall his first appearance on Johnny Carson, in 1981 in the flush of the TV show Mork & Mindy’s success; sweating and apparently nervous, he suddenly pointed to the mike dangling overhead and lunged upward as if to catch it in his mouth, making a dolphin-like bark and yelling, “Flipper!” (see the clip below). A decade later, in 1991, appearing on The Tonight Show to promote Awakenings, he leapt up from his chair and raced around the set, conjuring Arnold Schwarzenegger doing Hamlet.

Again and again over the years, the lambent lightning of his humor reduced Carson (and David Letterman, and Jay Leno) to helpless mirth. His flashing mimicry and ever-shifting personas were impromptu discoveries of sheer genius, and made for a sort of performance Dada. They also seemed a way of calming his own racing nerves—and, perhaps, of creating a sanctuary, a place of relief from the baffling task of being Robin Williams. Often Williams would pull off a rapid-fire sequence of impersonations, and you weren’t quite sure when, or if, he was being himself again. When he wasn’t joking he seemed palpably ill at ease, and frequently spoke in a cheesy announcer’s voice, as if to keep himself at one remove. One is hard put to name a performer more comfortable in his assumed selves and less at home in his own.

WHO AMONG US can say with confidence what he or she would do, will do, when faced with a dire medical diagnosis? Williams already had one enduring medical challenge—depression—and recently learned he would have to battle Parkinson’s disease as well. Parkinson’s is not so much a death sentence as a deterioration sentence—a significant distinction for a performer. As many have noted, Michael J. Fox provides an example of courage, not to mention thespian brilliance, in having converted the disease into an acting asset, even managing to deploy the stuttering spasms and hesitations of Parkinson’s as manipulations in the skill-set of the highly unlikeable corporate lawyer he plays in the TV show, The Good Wife. Apparently Williams couldn’t see his way through to doing something like that. Maybe it’s not surprising that a performer whose protean expressiveness relied so much on speed found himself overwhelmed by the prospect of a disease that bit by bit slows you down and finally renders you inexpressive. What’s clear is that the prospect of collapsing spiritually under the twin burdens of Parkinson’s and depression has elicited agonized sympathy from Williams’s millions of fans.

Grieving the loss of a celebrity is a strange thing. Not knowing the real person, we mourn a fantasy of the person that we have created through inference and imagination. Robin Williams as we imagined him was driven, vulnerable, and generous. “He was an incredibly kind human being,” wrote the young woman who played the older daughter in Mrs. Doubtfire, and who later in her life was the beneficiary of Williams’s support and encouragement when she went through difficult times. In his comedy Williams found and expressed a kind of manic grace under pressure. May he rest in laughter.