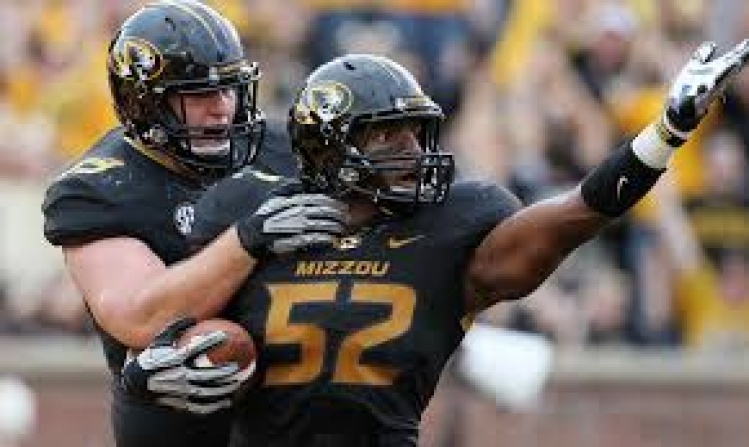 Sociologists and pollsters in the United States have noted that attitudes toward homosexuality have changed more rapidly than on any other major topic in the history of social science. The chart of overall change in the populace is stunning enough, and the generational change is even more dramatic (see below). But now, when I teach on this topic, I won’t bother using charts anymore. I’m just going to show a photograph of Michael Sam.

In case you missed it on Sunday, a college football player came out as gay. Michael Sam is a defensive lineman at the University of Missouri. He’s from the Southeastern Conference, which is both the best one and also at the heart of the Bible Belt. His team was highly ranked. Oh, and he was the SEC defensive player of the year. He will, by all accounts, be drafted into the NFL, where he will begin his career as the first openly gay player.

And yet the story behind the story is even more indicative of social change: the bigger story is that, when he told his teammates last year, absolutely nothing happened. Some already knew, some expressed relief. Under their shoulder pads, the team's response was a big shrug.

He had already confided in a few close friends, Sam recalled, and had dated a fellow athlete who was not a football player -- so while coming out to his Mizzou teammates last year was a key moment, it came almost as an afterthought, during preseason training camp.

"Coaches just wanted to know a little about ourselves, our majors, where we're from, and something that no one knows about you," Sam said. "And I used that opportunity just to tell them that I was gay. And their reaction was like, 'Michael Sam finally told us.' "

Asked what that moment felt like, Sam said, "I was kind of scared, even though they already knew. Just to see their reaction was awesome. They supported me from Day One. I couldn't have better teammates. ... I'm telling you what: I wouldn't have the strength to do this today if I didn't know how much support they'd given me this past semester."

He did not ask them to keep his revelation a secret.

What happened next? They went on to a banner season and victory in the Cotton Bowl. There continued to be no story from the locker room, and in a way, that’s the story. “An openly gay player at Missouri turned out to be a bonfire in want of a spark. His teammates nodded, and they moved on. There really was nothing to see here,” writes college football analyst Ivan Maisel.

Forty years ago, the same university denied recognition to a student group that proposed to be a forum about homosexuality. Today it's ready to send a gay football star to the NFL.

So we don’t need anymore polls or charts. The story—and the non-story—of Michael Sam says it all.