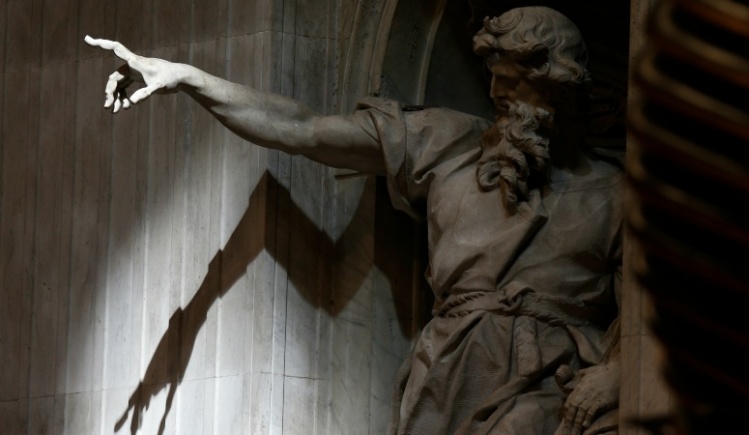 The pandemic of clergy sex abuse of children and adolescents has not abated. But you wouldn’t know that by reading some of the statements coming out of the Holy See Press Office lately. You’d think the Church has already rounded the corner on this issue and all it needs to do now is continue reinforcing a basically sound program and various protocols it’s implemented over the past several years.

The press office director, Fr. Federico Lombardi SJ, must have been instructed to at least defend the church’s cardinals any time one of them is accused of covering up abuse or shuffling around known priest abusers.

Back on March 4 he issued a long statement on Vatican Radio following the four nights of testimony that Cardinal George Pell gave from Rome via Internet to Australia’s Royal Commission on institutional responses to the sexual abuse of minors. At times it sounded bitter and defensive.

Among other things it offered praise for the cardinal’s testimony, calling it “dignified and coherent,” and for his willingness to meet victims who had come to Rome from Australia to be present at his hearing. Now Fr. Lombardi has rushed to the defense of French Cardinal Philippe Barbarin who is under intense scrutiny for allowing at least two, but most likely three and perhaps even more priests with histories of abusing minors to remain in ministry.

The cardinal is currently being investigated for allegedly failing to call the police on a priest who admitted to molesting kids years ago. “Whatever the outcome [of the investigation], it is still right to show respect and esteem for Cardinal Barbarin and his sense of responsibility. That cannot be considered offensive to anyone,” Fr. Lombardi said on Tuesday.

Sense of responsibility? That sure sounds like the spokesman has come to his own conclusion regarding the cardinal’s actions. He made the statement in response to an open letter that a group formed by the victims of the accused French priest (La Parole Libérée) published a day earlier.

Some would disagree with the extent and effectiveness of those efforts. But what really upset La Parole Libérée was the way he addressed their request for an audience with Pope Francis.

“Usually a private audience with the pope is not requested through a publication obviously aimed at exerting considerable media pressure,” he added.

“With all due respect,” they said, “La Parole Libérée did not write to Fr. Lombardi but to the most Holy Father.”

They said they made their request for the papal audience in an open letter “not to put pressure” on the pope but precisely to bypass people like the Vatican spokesmen who enforce the Vatican’s “auto-referential filters of defense.”

The Borgias have returned to the Vatican. Actually, only one of them. But apparently he’s no relation to his more famous namesakes who sowed a legacy of both saintliness and devilish intrigue throughout Spain and Italy in the fifteenth and sixteenth centuries.

The new kid on the block is Msgr. Paolo Borgia, the recently named Assessore for general affairs in the Secretariat of State. Pope Francis appointed the Southern Italian to the key post on March 4. The papal diplomat, who turns fifty on Friday, has been working in the Secretariat since 2013. Before that he served more than a dozen years in the field at Holy See nunciatures in Central African Republic, Mexico, Israel, and Lebanon.

He takes over from Msgr. Peter Wells, a fifty-two year old American who held he position since 2009. Wells will be ordained bishop by the pope this Saturday before taking up his new mission as apostolic nuncio to South Africa.

How big is the Assessore’s job? It’s probably one of the most important in the entire Vatican. The officeholder basically assists the Sostituto; that is, the deputy Secretary of State, more like the Vatican’s equivalent of interior minister.

The Assessore (there is really no good translation for the title in English) carries out the daily work in this branch of the state. Traditionally, he would be the official who runs papers, memos, and other business between the Secretariat and the pope on a daily basis.

Candidates for this job are very carefully vetted and usually selected from priests who have attended the prestigious Pontifcia accademia ecclesiastica, the elite academy that trains clerics to be diplomats of the Holy See.

You get the point. Archbishop-elect Wells and two other men who preceded him in this long line are not yet in positions to become cardinals. But one of them, Archbishop Gabriele Caccia (2002-2009), may soon be coming back to the Vatican as Sosituto, when the current man in the position, Archbishop Angelo Becciu, is expected to be appointed prefect of the Congregation for Saints.

Archbishop Caccia is currently nuncio in Lebanon where, not by chance, Msgr. Borgia spent three years as one of his assistants.

Many people are wondering why in the world Pope Francis ever named Cardinal Robert Sarah prefect of the Congregation for Divine Worship and Discipline of the Sacraments (CDW).

The former “baby archbishop” of Conakry, Guinea—he was only thirty four when John Paul II named him to the post in 1979—has been a Vatican official since 2001. And throughout these past fifteen years he has appeared to grow progressively more conservative, especially in liturgical matters.

While the current pope has done little to address issues related to worship, apparently deciding it’s a battlefield on which he does not wish to spend any of his capital, he has certainly not been supportive of the sort of “reform of the reform” agenda his Bavarian predecessor championed and the Guinean cardinal prefect continues to support.

But Francis did intervene on one matter. Last year (December 2014) he asked Cardinal Sarah’s office to amend the norms for the feet-washing ceremony that is available for optional use at the Holy Thursday Mass of the Lord’s Supper. The pope wanted to officially sanction a common sense practice that he and thousands of other priests around the world have followed for many years—include women among those whose feet are washed.

An entire year went by and nothing happened. So Francis had to remind the cardinal again that the norms needed to be amended. The CDW finally did so with a decree that was issued this past January. It was accompanied by a commentary by the congregation’s secretary, Archbishop Arthur Roche.

But then the cardinal reportedly said that each priest or bishop “has to decide in accord with his own conscience, and according to the purpose for which the Lord instituted this feast” whether to opt for the ritual and whether then to include women.

It is certainly legitimate to disagree with a pope, especially on matters of style, personal piety, devotionals and so forth. But not when you are directly working for him as a close aide.

So why did Pope Francis make Cardinal Sarah head of the worship office? The unofficial word, which no one has denied, is that he wanted to give the job to Archbishop Piero Marini, currently president of the Pontifical Committee for International Eucharistic Congresses.

But it is said—and, again, no one has denied it—that someone in high authority intervened and told Francis that appointing Marini, a man so closely identified with the Vatican II liturgical reforms, would “cause a war” with more traditional Catholics.

Now who might that have been? Ich habe keine Ahnung. Or as one might say according to Comme le prévoit, the 1969 Vatican document on rules of translation, “I haven’t got a clue.”