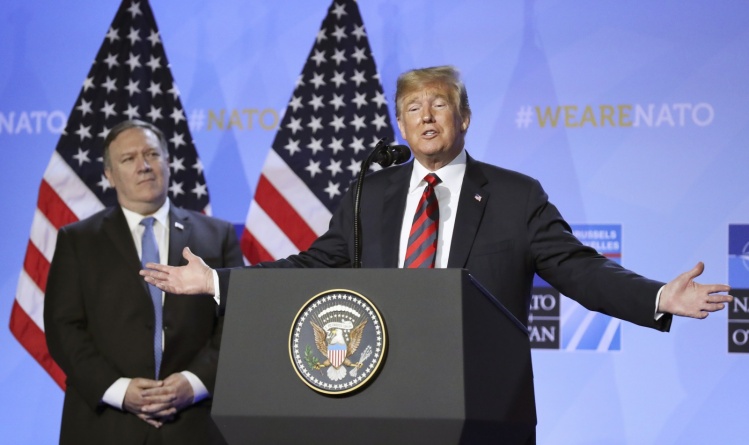 To Americans, Donald Trump’s recent anti-Germany rage may seem like just more in a chain of inane proclamations: Why pay any attention, after all the nonsense he’s spouted thus far? If we habituate to the president’s trash-talk, it’s not because we want to accept it as the new normal, but rather because we don’t want to dignify it with a response. Or so we tell ourselves. But if we’re honest, it’s also because we want to spare ourselves the shame of acknowledging the state of our country’s leadership. And what is really new here anyway?

Actually, plenty. In the last several weeks, Trump openly bullied Germany at a NATO meeting; he proclaimed the EU a foe; and he weakened the fundamental plank of the Western alliance by suggesting that NATO would not bother defending a puny country like Montenegro. These are all firsts. Trump specifically targeted Germany, calling it a freeloader that enjoys the protection of the United States against the Russian threat while contributing too little to NATO coffers and making itself dependent on Russian gas. 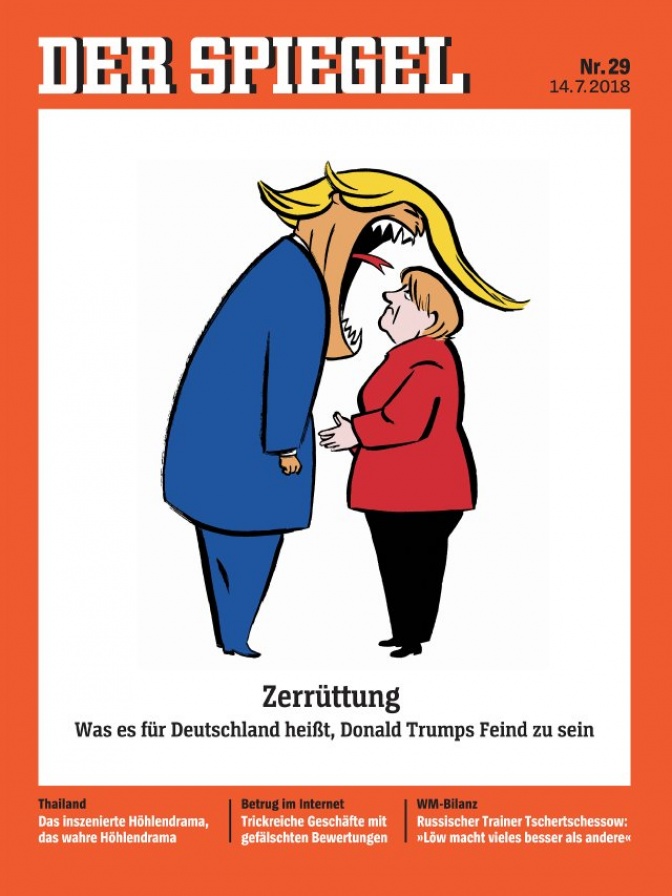 German media outlets swiftly set the record straight: Yes, Germany could pay more, but it had already agreed to the 2 percent of GDP target well before Trump’s harangue, and it should not now—editorialists argued—bend to threats from the U.S. In fact, Trump has now made it politically more difficult for Germany to do what it had already intended to do. And no, Germany is not, despite the significant amount of natural gas it indeed purchases from Russia, “captive to” it, as Trump preposterously claimed. As it happens, Germans themselves have been debating this policy substantively for some time, since long before Trump picked it up and distorted it for political gain. And, with at least as much natural gas coming from the Netherlands and Norway, German energy sources seem pretty well diversified.

If this—mere policy!—were all that was at stake, we might be disappointed and annoyed, but not really surprised. For this is a game now deeply familiar to us. Yet again, our tomato-thrower-in-chief succeeds in luring us into the role of wonky respondent, getting us to lay out the case he didn’t even bother to make, in an effort to put things aright. But of course by then, the base to which he was always only appealing is no longer listening. Once more, he busts into the room with bluster and braggadocio and goes on a rampage. We (to the extent we are still paying attention) are left to clean things up.

But sometimes the damage is so bad, that even he beats a hasty (and usually half-hearted) retreat. This pattern held in Europe as well. Having roughed up Merkel at the NATO summit, he proceeded to convey “personal” greetings from his daughter Ivanka, as if that mattered. And after repeatedly placing the alliance’s core defense commitment in doubt, he wanly “reaffirmed” the United States’ obligations.

Still, the damage was done. In Germany and elsewhere in Europe, Trump broke things that are not so easily mended. In a recent op-ed piece for The New York Times, former German ambassador Wolfgang Ischinger observed: “The era of America’s benign hegemony may be over.” This is diplomat-speak for “is really over.” Trust in America, as tracked by German Public Television’s “Politbarometer,” is at an all-time low. Just 9 percent of Germans think of America as a “reliable” political partner. (Russia and China by contrast, do considerably better: 36 percent and 43 percent, respectively.)

Germany now is drawing the conclusion that it and Europe will have to go it alone, though just how they would do so is not clear.
sharetweet

The opinion-makers here in Germany are no more sanguine. Klaus-Dieter Frankenberger, writing for the conservative Frankfurter Allgemeine, suggests that Trump no longer sees Germany as the democratic success story supported by the U.S. throughout the postwar years, but as a calculating and cunning rival. Gerd Appenzeller (in the Berlin Tagesspiegel) simply declares the days of high-level trust as over—“vorbei.” Under the headline “Friendly Fire,” the weekly Der Spiegel insists that no country has been subject to Trump’s tirades as has Germany, and that the post-war relationship has never been worse than it is now.

Trump has indeed squandered trust that was built up over decades. It wasn’t just the Berlin airlift or John F. Kennedy’s solemn pledge in 1963 to defend Berlin as an outpost of the free world that characterized the American commitment to Germany. More than anything, it was the thousands of American troops stationed in Germany throughout the postwar period who essentially served as guarantors that the United States would indeed treat any attack on Germany as an attack on its own soil.

I remember that Cold War-era well. When we fought about transatlantic politics in those days, it was about how America was fulfilling its role, not whether it would do so. In the early 1980s, we protested the installation of Pershing II and cruise missiles on German soil out of fear of nuclear war, not because we wanted the United States to walk away, as Trump is now threatening to do.

None of this is to idealize the German-American relationship, which had some rough spots in the postwar period, not the least of which arose from the student movement fifty years ago. Young German protesters then vehemently objected to being made vassal to a patron whose hypocrisies were so evident. In their eyes, the U.S. civil rights movement revealed America to be a deeply flawed, if not utterly failed, democracy, and the war in Vietnam was “proof” of its own state-sponsored genocide. Cultivating democracy in Germany was a conflicted endeavor from the very beginning. But despite all of this, the special relationship held.

Germany now is drawing the conclusion that it and Europe will have to go it alone, though just how they would do so is not clear. It is telling, to me at least, that this year’s anniversary of the Berlin Airlift was marked by a lackluster ceremony hardly commented upon in the press, whereas the anniversary of the July 20 assassination plot—the failed attempt led by Claus von Stauffenberg to kill Hitler in 1944—became the occasion to celebrate European self-help at a time when the Americans can no longer be counted upon. Now that the U.S. seems to be walking away from Germany and Europe, this failed “self”-liberation from Nazism is being invoked as inspiration for a push toward European independence.

When Trump was elected president, I braced myself for the onslaught of criticism from German friends that I felt certain was to come. I expected to be grilled about our arcane Electoral College, and to have to explain how we could possibly have let all this happen. Why didn’t we, citizens of the world’s great exemplary democracy, turn out in greater numbers? I’d never known them to spare me their unvarnished critique in the past. For example, if the Holocaust was the topic of discussion, I would be reminded in no uncertain terms about the horrors of American slavery and the genocide perpetrated against Native Americans. Yes, of course, Nazism was deplorable, but that didn’t give America the right to lecture others, they would remind me. They weren’t about to tolerate any holier-than-thou preaching from an “Ami” like me.

But traveling to Germany in the Trump era, I encounter extraordinary gentleness in conversations. Contrary to what I feared, I sense deep concern on the part of Germans, manifesting as kindness—even protectiveness. They seem to want to spare me a pain they are familiar with. Then I say something I’ve never said, or had to say, before. I confess I am ashamed of our president, and even more of the support he has from so many Americans. I can’t help uttering those words with a bit of emotion, because this goes far deeper than the myriad policy disputes of the past. And then I brace myself for the tongue-lashing that just never comes. Don’t feel that way, they say instead. We don’t want that. We know what it is like to feel shame for your country—we’ve been there. We’re kind of experts at that.

It is an act of kindness and generosity on their part, to be sure. But in making this awful analogy, one we all deem to be at least in some respects plausible, I feel my shame all the more deeply.