A Drawing & a Mystery
By W. E. Mueller
U.S. Catholicism
The Last Word 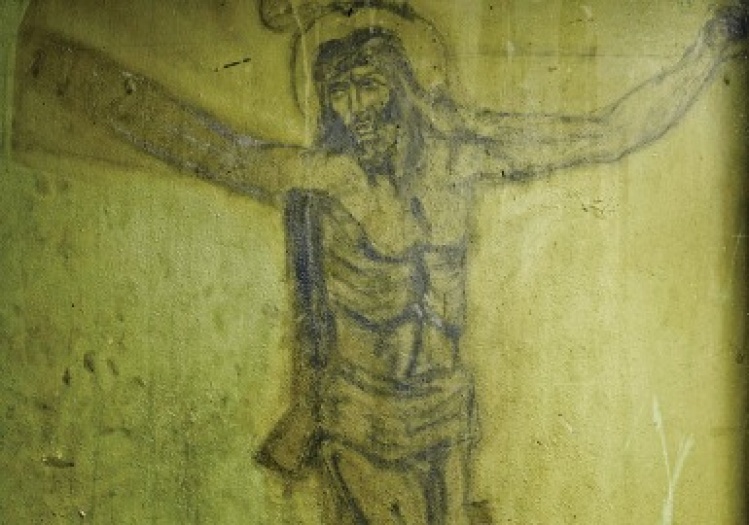 [This piece originally appeared in the December 20, 2013, issue of Commonweal.]

The single piece of evidence in what may be the St. Louis Police Department’s oldest unsolved mystery hangs in the lobby of the department’s training academy. It is a stunning drawing of the crucifixion. The mystery is who drew it and why.

The story begins on December 24, 1930, a year into the Great Depression. At the time, it was not unusual for Police Headquarters in downtown St. Louis to open its doors to the homeless on frigid nights. Sometime that evening the Central District took in ten or twelve “vagrants” and housed them in Cell Eight, the “holdover” cell. They were not charged with any crime, so they were not “booked”—names were not taken. Drifters and homeless crowded into the cell and slept on steel bunks. Early the next morning they were fed a chunk of bologna, bread, and coffee, and released back onto the streets. It was Christmas Day.

Days later, a porter cleaning the dimly lit Cell Eight discovers the drawing on the concrete rear wall. He reports it to the turnkey, and the discovery soon becomes public.

The drawing is striking in its accuracy. It is four feet high and nearly perfect in proportion. Only the right arm of Christ is not complete, stopping abruptly near the elbow. Speculation begins as to who drew it and what medium he used. Burnt matchsticks, the black rubber heel of a shoe, charcoal, crayon, and pencil are suggested. (To this writer it appears to be pencil.)  No one attempts to make a scientific analysis. No one wants to disturb the drawing.

Stories in the St. Louis newspapers turn up nothing. The AP runs a nationwide story without results. Claimants come forward, but none can complete the right arm. “Experts agree,” the January 1960 Police Journal reports, “the man who drew the picture was either a student of art or anatomy.”

In 1932 the chief of police orders a protective glass over the drawing and directs that Cell Eight never be used again. Tours of the department include the drawing, now under a bright light so visitors can see it in the otherwise dark cell.

Barbara Miksicek, department librarian and custodian of the drawing, says that radio legend Paul Harvey told the story of the drawing several times in his Christmas and Easter broadcasts. It may have been a Harvey narrative that motivated John F. Fritsch to seek out the drawing. His resulting epiphany is recorded in his pamphlet Hope and Help: “What alcoholic, on some remorseful occasion in the course of sobering up, could look at this drawing without failing to realize what he is allowing alcohol to do to his body, a body given to him to take care of by the very One he is looking at—God, in human form, who put Himself on earth as man and allowed Himself to be put to death so that we could have an opportunity for eternal Salvation.”

The mysterious drawing remained in Cell Eight for over thirty years, until Police Headquarters was remodeled in 1967. The drawing and the wall surrounding it were cut away and moved to the training academy. In the mid-1990s, the drawing was encased in a hermetically sealed frame. And that’s how it stands today.

Few St. Louisians are aware of the drawing now. Tours of the department and academy are rarely given. There are no Paul Harveys reporting its influence. The remaining St. Louis newspaper hasn’t written about it in decades. It is an open case of whodunit and why.

I asked Ann Rotermund, senior director of mental-health programs for the homeless at St. Patrick Center in St. Louis, what state of mind she thought the artist was in when he drew the picture. “I see it as a sign of hope,” she said, “not depression…of hoping to build a new life.” The Crucifixion is a painful image, Rotermund notes, “and the homeless have a painful path in changing their lives. To me,” she emphasized, “the drawing is about hope.”

Rotermund has never read Fritsch’s pamphlet, but her comments parallel his, written a half-century ago: “The full story of the drawing is far from complete. Its message will continue to be told to anyone and everyone who will take the time and effort to go to see it on the wall…from where it will tell its own story as long as the wall stands—the story of Christ in Cell Eight—the story of hope, hope for anyone who needs or wants it—and asks Him for it.”