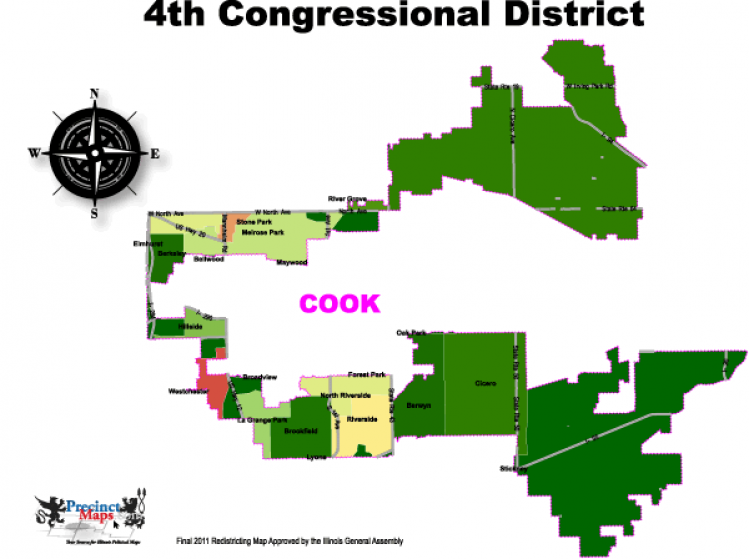 Representative Daniel Lipinski, a Catholic Democrat from Illinois, said he had listened to the bishops and priests from his district. But he said he viewed their opinions on immigration as less binding than the church’s positions on social issues.

“There are some issues that the church speaks authoritatively on, such as abortion, in protecting life,” said Mr. Lipinski, who remains skeptical about promises of increased border security. “And then there are prudential judgments that are made, informed by Catholic theology, but it’s not something that Catholics are required to follow.”

When Catholic Democrats resort to the “prudential judgment escape hatch” on an issue where bishops and liberal Catholics hold a united front, something is broken. One thing that is broken is our congressional districting system. If you look at Rep. Lipinski’s gerrymandered district, you might wonder why it was drawn that way… until you look at the incredible gerrymander created in 2011 for Rep. Luis Gutierrez, Lipinski’s (sometime) neighbor. This gerrymander is there to ensure Gutierrez a majority Latino district… with the effect of pulling Latinos out of Lipinski’s distinct to fill it with more suburban Chicago white ethnics, who are generally hard sells on immigration. What a disaster for the solidarity needed for immigration reform!

The other thing broken is our handle on the term prudential judgment. I and others have written about this before (here, here, and a roundtable at catholicmoraltheology.com). Politicians must be reminded that, while particular policies are subject to prudential judgment, overall trajectories are not.

…properly speaking, “prudential judgment” is not merely pragmatic – not simply about the best results. It indicates “fittingness.” Certain means are intrinsically evil. But others are not. War is a classic example. War, in the just war tradition, can sometimes be an acceptable means to certain ends. BUT THIS DOES NOT MEAN ANYTHING GOES. …All is not fair in war, says the just war tradition. Thus, to say that judgments about particular wars are “prudential” is not to say that they are merely pragmatic. It means that there is a range a situations (a limited one) in which a given act is morally acceptable. Intrinsically evil acts differ – there is no range. Notice: the proper distinction here is “no range versus limited range” – not “no range versus unlimited range.”

Thus, just as wars must be criticized firmly if they do not seek just ends, so too immigration reform policies must seek ends consonant with the principles of Catholic social teaching. Rep. Lipinski may oppose details of a particular proposal, but he is bound to offer some alternative means of achieving the objectives laid out by the bishops. These include a right to immigrate to find work, the rights of families not to be separated, and the obligation of reasonable hospitality by the wealthy. These are not prudential judgments, but are necessary legislative goals.

Missing a Vocabulary of the Moral Middle