The ghosts of 'Economic Justice for All' (Part I) 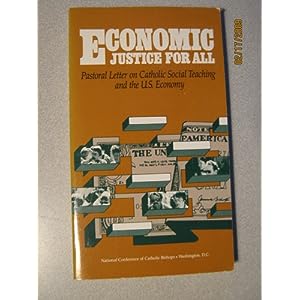 On Saturday the New York Times publishedMark Oppenheimer's writeup of the controversy surrounding Duquesne University's refusal to allow teachers it pays no more than ten grand a year -- without health coverage -- to form a union. (Paul Moses covered it here.) Oppenheimer nicely summarizes the issue: "Catholic moral theologians say Catholics have a special duty to recognize unions and Catholic administrators say their university has a special right not to." Of course, as the piece makes clear, you could just as well substitute "popes" or "bishops" for "Catholic moral theologians." When Benedict XVI wrote that labor unions have always been encouraged and supported by the church, he wasn't kidding -- or innovating.Still, perhaps Benedict might chortle at one of his priest's interpretation of church teaching on the right of labor to organize. As is required of all exercises in journalistic coverage of Catholic economic questions, Oppenheimer's article features a predictable quote from free-market warrior Fr. Robert Sirico. Arguing for a curiously contingent view of Catholic social teaching, Sirico suggests that because Rerum novarum -- Pope Leo XIII's encyclical on labor and capital -- was written in 1891, it may not apply to the situation of Duquesne's adjunct professors. In the industrial revolution, the church was concerned about communism, and not just capitalism but savage capitalism, Sirico told Oppenheimer. People were being brutalized. Thats just not the case in Pittsburgh today.Of course, there's nothing particularly humane about a Catholic university paying half its faculty a wage below the poverty line. Yet that's not what's most galling -- or laughable -- about Sirico's comment. No, it's the idea that Rerum novarum had an expiration date. Needless to say, that's not exactly what Leo XIII had in mind when he wrote it: "We may lay it down as a general and lasting law," Leo taught, "that working men's associations should be so organized and governed as to furnish the best and most suitable means for attaining what is aimed at, that is to say, for helping each individual member to better his condition to the utmost in body, soul, and property." Why "general and lasting"? Because, as Vince Miller ably explains, the church's support for workers' right to unionize is rooted in natural law -- not merely a reading of the signs of the times. The U.S. bishops of the late 1980s understood this. No one may deny the right to organize without attacking human dignity itself," they wrote inEconomic Justice for All (1986). A clear, strong statement. But is it one the bishops of today would endorse?

The subjects of that pastoral letter were discussed at some length during the U.S. Conference of Catholic Bishops meeting earlier this month. Bishop Stephen Blaire -- remember him? -- chairman of the USCCB Committee on Domestic Justice and Human Development, sought the bishops' approval to begin drafting a "message" tentatively titled "Work, Poverty, and a Broken Economy." The motion won the bishops' support by a wide margin, but the signals Blaire felt he had to send in order to win that support says a lot about the makeup of today's USCCB.Blaire acknowledged that such a statement was "not only timely, but perhaps overdue" -- indeed, at its November 2011 meeting, the USCCB did not even acknowledge the twenty-fifth anniversary of Economic Justice for All, let alone reserve time to discuss the economic crisis. Yet Blaire was also careful to say what the message would not be. It won't be "another pastoral letter on the economy," Blaire reassured the bishops. "Its not going to be, 'Oh, weve got another program, one size fits all'.... Were not going to be writing a policy letter." In other words, this won't be the sequel to Economic Justice for All.Such assurances calmed the concerns of several bishops, notably Bishop Earl Boyea of Lansing, Michigan, and Archbishop Joseph Naumann of Kansas City in Kansas. Boyea thanked Blaire for "the caveats contained both in the report and that you have articulated as well from the podium." Still, "my objections are probably more a caution," Boyea said. About what? Perceived partisanship:


Because there have been some concerns raised by some lay Catholics, a good number, and especially some Catholic economists about what was perceived as a partisan action against Congressman Ryan and the budget that he had proposed. [He's referring to Blaire's committee's criticism of the Ryan budget, and conservative complaints about it.] One problem is that this was perceived...as an action of the bishops, when it was only a committee. Another problem was that it was perceived as a wholesale dismissal of a very detailed plan when we...need to be only articulate in principles, and let the laity make these applications. Thirdly, it was perceived as partisan, and thus really didnt further a dialogue in our deeply divided country. Im somewhat reluctant to support this proposal, but your caveats have helped me a great deal, because Im not sure that we have the humility yet not to stray into areas where we lack competence, and where we need to let the laity take the lead.... We need to listen more than we need to speak. We already have an excellent, fine compendium of the social teachings of the Church, which is an excellent source of our Churchs theological positions on these matters.

The Compendium of the Social Doctrine of the Church is five hundred pages long.Archbishop Naumann seconded Boyea's emotion: "There really is a perception problem with the conference and with this committee particularly as being perceived at times as partisan." But he went further:


Some see the whole solution as being a solution that the state solves, and the more people we get on to state assistance, the better. And that same group of people also seem to do other things that attack the structure of the family.... Weve seen some solutions tried now for decades with no real results, and I think, I hope that our statement wont just be again a reinforcement of that. And finally I think we need to talk about the debt and the real seriousness of that debt, and that we cant just simply go on, as sometimes were perceived as just encouraging the government to spend more money with no realistic way of how were going to afford to do this.

He failed to propose new revenue streams. (Naumann, you may recall, played that tune during the health-care-reform debate, darkly warning against "socialized medicine.")Bishop Thomas Paprocki of Springfield, Illinois, echoed Boyea's sentiments too, urging the drafters of the statement to seek advice from economists at, for example, the University of Chicago or Notre Dame. (As president of the USCCB, Cardinal Dolan will select the drafting committee.)He closed with some advice of his own: "Jobs need to be created in the private sector, because...in the long run I think thats the best way of helping people to have economic stability."Three bishops spoke in favor of the proposed statement, including Archbishop William Lori of Baltimore. Both Bishop Ricardo Ramirez of Las Cruces, New Mexico, and Archbishop Joseph Fiorenza, formerly of Galveston-Houston, reminded the bishops that Economic Justice for All still holds. "It was our pastoral," Fiorenza said. "It is our document. We voted for it. We stand by it. So it seems to be at least the basic principles that we incorporate in the pastoral could find a welcome place in your special message." Indeed, the letter was approved with just eight dissenting votes. "That document was such a milestone," Ramirez said, "and one of the proudest moments of this conference. And we need to say something about the economy since then. Its been a long time. Some things have changed. Things that have impacted our economy and every one of us and our poor people especially."But Bishop Fabian Bruskewitz of Lincoln, Nebraska -- no surprise -- wasn't buying it.


Id be willing to wager, from my anecdotal experience, that most of the priests in the United States have not read [Economic Justice for All], or much less studied it, or much less decided to implement it. And I often think many of the members of this elite body dont even know that document, or havent studied it or read it, or would be able even to quote a line from it. So I think we emit documents perhaps a little more effusively, we pour out things, a few years ago it was more ample than it is now, thank God, but most people pay very little attention.

Could Bruskewitz be right? It's not as though he has a front-row seat in Lincoln, Nebraska, but still: How did we get to the point where a meeting of the USCCB could entertain a conversation in which several bishops openly downplayed or denigrated one of the most important documents the conference ever issued? HasEconomic Justice for All become so embarrassing that in order to get the conference to support a committee document on an economic crisis more perilous than any since the Great Depression its chair must pinky-swear not to publish anything that approximates the 1986 pastoral letter?David J. O'Brien wrote about Economic Justice for All in Commonweal last year, recounting the history of the document's composition under the leadership of Archbishop Rembert Weakland, and providing a few theories about its "uncertain legacy." "At the peak of Reagan-era moral conservatism," O'Brien concludes, "the American bishops, in the name of their people, offered a vision of inclusiveness and human dignity. Let us hope the American Catholic community can do so again." Perhaps the wider Catholic community can. But this bishops conference? As it happens, Weakland took up that question in a paper he delivered at the Catholic Theological Society of America meeting earlier this month. Would he change anything about the process of putting together Economic Justice for All?


Naming a competent in house staff, selecting a group of diverse outside experts, scheduling numerous hearings across the country, publishing several drafts for public scrutiny and discussion before presenting to the bishops the final product for their vote. Even though the process lasted five years...I would not want to see one aspect of that process changed. But I acknowledge, a bit regretfully, that it would be impossible in our time to duplicate that process.