Football Is a Funny Game! 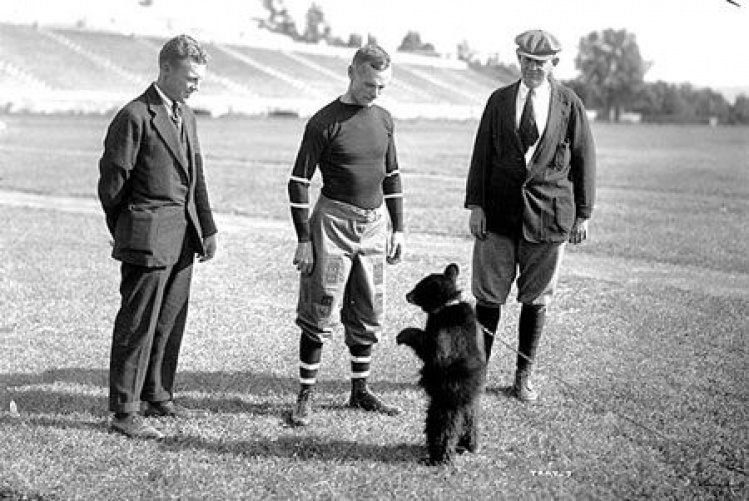 Football has become such a serious sport that the title of this article seems questionable. A foreign university professor visiting the United States not long ago on academic purposes, declared that he found the accounts written about football in this country, and evidently read widely and with satisfaction, the funniest literature it has ever been his good fortune to encounter. As  evidence he produced an article in which a well-known football writer de­ scribed the scene in the dressing-room of a defeated team just after a big game.

The team of one of the major universities had been beaten when everyone had expected it would win. "The preliminary dope had failed to register." (The professor found this slang frequent and piquant in American university matters.) In contrast to the noisy clamor just outside, there was the most absolute silence in the dressing-room. The defeat was too poignant for words. This was the game of the year, the game for which they had trained particularly and felt that nothing was too much to do and now it was over and their work for six months had been all in vain. Life held nothing more worthwhile. As they removed their football togs for others, they gathered around one of the players whose shoulder had been dislocated during the game, to sympathize with him, and as they tried to tell him brokenly the outstanding points of how the game was lost, the tears rolled down their cheeks. This sad scene with the dressing-room fairly swimming in tears proved too much for the visitor from abroad.

When I talked to him about it, I tried to insist that this was an extremely exceptional case, hut he assured me that he had read other reports like it, and he added that if I cared to look through the literature of football I could find any number of descriptions of corresponding scenes of heartrending sadness in manly youth over the loss of a football game. He said that when he studied Greek, he and his college friends used to be very much amused over the way the old Greeks so easily wept and were not ashamed to display their grief. Even strong-hearted warriors publicly melted into tears and did not seem to think it necessary to repress their feelings. Young collegians used to think that we moderns had changed all that. But now it is evident that Horace's dictum remains as true as ever—"You can push out human nature with a fork, but it will come back again." There has been a reversion to old ways under the primitive urge of football. Anyone who thinks that the old Greeks wept more readily than we do should consult the football annals and see how copiously our young football giants weep.

The professor had been nosing into the literature of football just to get the point of view of the young men themselves. He had turned up a very touching story by Grantland Rice, recalling in similarly lachrymose terms the famous occasion on which Columbia beat Yale. On that unique occasion, Charlie Mapes of Columbia was especially overcome. I wonder if any Greek warrior ever excelled him as Mapes himself told the story: "I shall never forget it. Columbia had beaten Yale. Tears running down my cheeks, shaken by emotion, I could not speak, let alone cheer." (Poor fellow, one must pity him. Who said that tears and joy are so close in the human heart? It takes football to bring out the truth of that.) "My best girl was with me." (Poor thing!)  "She gave one quick, half-frightened glance." (How could she do anything else with this big strong man, whom she admired so much, just melting away in tears? I sup­pose she feared that there might he nothing left to go home with.) Mr. Mapes added, "I believe she almost realized all I felt. She was all gold."
But there is much more of this sentimental tale for the benefit of the public which feels there is nothing in the world quite so important as winning a football game. Mr. Mapes continued, "I feel now the timid little pressure on my arm as she tried to help me gain control of myself. God! Why has life so few such moments?" Of course, they married and lived happily ever after. And then Grantland Rice adds,“There you have the soul and spirit of football."

Of course, what you really have is plain hysteria—always an amazing and amusing phase of poor human nature. We now have a single-word definition for hysteria. It is super-suggestibility—that is, over-readiness to take suggestions because of lack of control of the nervous system. There is ever so much more of it in our generation than we had any idea of until the war opened our eyes. "Shell-shock" was nearly all hysteria. It is not the so-called strenuous existence in America that makes us neurotic, as much as it is taking our sport too seriously. Some of the sportswriters recognize that fact. Here is an instance from Grantland Rice: "Three season ago, Ohio State won two or three of her "big ten" championship games in the last minute of play; with only a few seconds left, a forward pass sailing through the air brought on the miracle." (Only the very strongest words are quite strong enough to tell the tale of football events when an enthusiastic sport—writer is behind the pen.) "And when that season was over, every Ohio State follower had to seek a nerve specialist for repair."

Of course, the writer's expression is only an exaggeration for humorous purposes, but the reason  it is a joke is because of the soupcon of truth that is behind it. Is it any wonder that neurologists  associate football and hysteria when even the sport writers see it so clearly? Intensity of this kind, especially over trifling affairs in which the interest has to be worked up artificially, tends to make people, especially young people, hysterical. That is why crowds at football or baseball games get so excited that they sometimes do things almost impossible to understand among civilized people. That is what makes for the multiplication of accidents in motoring to and from games. The nervous excitement involved, superadded to youthful impulsiveness, lessens self-control to a marked degree. Under the circumstances, tragedy and humor draw close till but a line divides them.

The worst of it is that the hysteria spreads to the crowd and affects a great many people.  Thousands will sit in a football stadium in the wet and rain, risking pneumonia and all sorts of serious ills, to watch a so-called football game, which is really more of a modification of water polo than football.

College papers sometimes hint that scholarship for its own sake, especially as pursued as pursued by the "greasy grind," is essentially narrow and selfish. One very serious college editor insi5ted that the really generous student is the one who works, not for the cultivation of his own mind, bat for the glory of his alma mater. But the foreign professor was glad to find that at least some of our college instructors objected to this point of view, and he read a quotation from Professor Grandgent of Harvard which quite met with his approval: "As if a college could derive glory from anything but the fulfilment of its proper mission—the cultivation of the individual minds entrusted to it." Professor Grandgent added: "The altruistic tone assumed by devotees of college amusements is peculiarly irritating. I am willing that children should make mud pies; it is their nature, but when they begin to declare that they are making mud pies, not for their own delectation, but for the embellishment of their city, it is time that they were sent on errands for their mothers."

Now I would not, for a moment, have it thought that I am poking fun at football. That would be dreadful, for football makes the melancholy fall of the year which might otherwise prove so depressing, quite bearable. It is only that I feel deeply that if we are missing any fun in football, it is too bad.  That man is a risible animal, is as good a definition as that he is a rational animal. Indeed, some of us think it better because it is easier to make the distinction. Whenever you can laugh quietly at yourself, you are sane. The insane are nearly always people who take themselves too seriously. Just now, in the matter of football, the academic classes of this country are taking themselves too seriously. The foreign professor would like to see them laugh a little at themselves over each increasingly funny football season.

James J. Walsh is the author of The Thirteenth, the Greatest of Centuries.