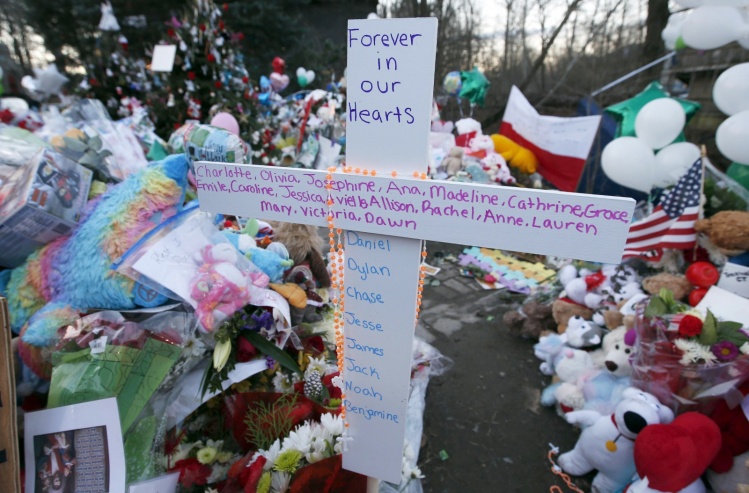 Five years ago last Thursday, my daughter was in first grade, and I was picking her up from school when news of the massacre at Sandy Hook Elementary began to trickle in. Newtown is about forty minutes down the highway from Hartford, where my family lives. We have friends there, and know it as a cozy place that was already much loved by its residents, even before the massacre of twenty first-grade kids and six adults by a mentally troubled young gunman turned it into a national symbol of grief.

And now it is five years. How to take stock? In Newtown, a bell tolled twenty-six times Thursday, and a photographic exhibit in the town’s municipal building marked the anniversary with portraits of the kids and teachers who died. The town’s first selectman issued a statement inviting visitors to “take a moment to be reflective, to recollect in kindness and love those children and adults who died that day.” To that end, there’s also a website, MySandyHookFamily.org, where you can learn about the victims by clicking on their names. You’ll find short entries, written by parents, describing their kids: what they loved, what they cared about in their short lives; how much they are missed.  I can’t read these tributes without weeping. All these children were born within a few months of my daughter, and I think of them as her ghost contemporaries; as she ages and grows, my thoughts turn down the road to the parents of those kids who will remain six years old forever, their lives stilled in such a sudden and hideous way.

A front-page article in the Times provides an affecting portrait of how grief has played out in the lives of survivors. Noting the arrival of winter and what one Newtown resident calls “the season of extra mourning,” the article lays out the complicated spiritual and emotional roadmap followed by those who lost loved ones and are trying to balance their pledge to never forget with the need to live again. Parents show a range of reactions; some have withdrawn into completely into private life, while others have “leapt into activism.” A heartbreaking and inspiring story in our local paper, the Hartford Courant, introduces readers to Alissa and Robbie Parker, a young couple whose daughter, Emilie, was one of the murdered first-graders. A year later, the Parkers moved across the country, to the Pacific Northwest, “to resettle in a place where they could control how much the tragedy at Sandy Hook Elementary defined their story.” There they have rebuilt a life centered on their two younger daughters, while helping run a nonprofit that promotes safe-school policies. The interview with the couple reveals terrific courage. “When I heard people say ‘what happened to your family is my worst nightmare,’ I realized they were thinking ‘I would never trade places with you,’” Alissa Parker says. “And that was heartbreaking.” Then she continues: “But we have a choice to make. Yes, he took my daughter’s life, but I refuse to give him that power over us.”

As for how we have progressed as a nation, I wish the picture were brighter. As we know, the perverse effect of Sandy Hook nationwide has been a loosening of gun restrictions and a measurable uptick in the already staggering number of weapons saturating our society. Mere days after Sandy Hook, I recall how shocked and depressed I was to read about people thronging gun shops—right here in Connecticut—to buy the very weapon that Adam Lanza had used. The rush to buy was driven by fear of tightened gun laws, but it also had a ghoulish aspect, as if the weapon itself had acquired cachet by virtue of its notorious use. Wouldn’t a normal and morally sensible reaction be revulsion, the instinct to put as much distance as you could between yourself and that instrument?

But morally sensible reactions do not abound in the gun discourse. Last week, an op-ed in the Times recalled the effect that the Sandy Hook massacre had on gun buy-backs organized by a church in Dallas. The group had been running occasional buy-backs for several years; when it sponsored one a month after Newtown, the event was beset by armed protestors who swarmed the street, carrying shotguns, military-style semiautomatics, and holstered handguns, and shouting “Don’t euthanize your guns!” at people who had come to turn in their weapons.

Morally sensible reactions do not abound in the gun discourse
sharetweet

This is the kind of thing that makes one despair. In the infuriating dynamic of the gun wars, mass murder doesn’t trigger progress, but the reverse: more clenched insistence on the right to untrammeled gun ownership (one Sandy Hook couple who lost a child received, anonymously in the mail, a torn page of the Constitution with the Second Amendment on it); more paranoia and anger; more guns. Vestiges of frontier individualism combine with conspiratorial worldviews, internet-stoked hostility to government, and paranoid survivalism to reveal the dark underside of the American psyche—what the Times succinctly calls “a virtual sewer of conspiracy theories and claims that the shooting was a hoax.” Indeed, a year or so after Sandy Hook some person went around defacing and vandalizing playgrounds named for the children who died, in order to publicize his view that the entire thing was a hoax. You’d label such a person a madman and an outlier, were it not for the fact that such warped views keep creeping ever closer to the political mainstream. Meanwhile, the slaughter has continued, with some of the most grievous mass killings in American history happening in the years since Newtown, adding new places to the grim roster: Orlando. Las Vegas. Sutherland Springs. Last week, in its first major piece of gun law in the post-Newtown era, the House passed a bill allowing people to carry concealed weapons across state lines—a significant expansion that can only make things worse, putting us another step toward the nightmarish vision of an America in which everyone is armed, everywhere.

What in God’s name to do? It is so tempting to throw your hands up in despair. To counter that temptation, we can take inspiration and example from the host of Newtown parents who have been indefatigable in their pursuit of change. And we can remind ourselves that there really is a sensible way forward toward a saner gun policy. It lies in responsible regulation: better training, licensing, insurance, oversight, and on and on. I won’t go into the specifics here, but only say that we need to treat guns with the respect that 2nd Amendment enthusiasts claim to have for them. Respect not only for their owners’ rights to have them, but for the weapon itself, and its potential to effect harm.

The forces arrayed against hope often seem overwhelming. But imagine what the Newtown parents felt, and what they faced. If your will is flagging and your spirit downcast, let the humanity of the Newtown children and the courage of their families recharge your batteries. There is so much we can do.