From Columbus to Pinochet
By Kenneth Aman 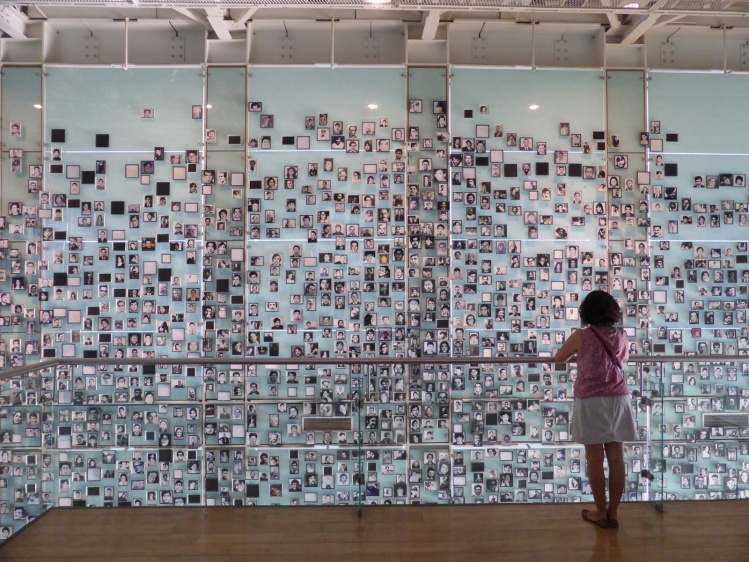 Photographs of the victims of the Pinochet regime (Wikimedia Commons)

With all their divisions, Christians in Latin America nonetheless appear united in one perception: 1992—the five hundredth anniversary of Columbus’s discovery—will be a landmark for the continent. So much so that a great deal of thought and not a little maneuvering are already taking place to determine its significance. One recent international conference, held in Santiago, Chile, in July and sponsored by the Academia de humanismo Cristiano, a highly respected think tank with ties to the archdiocese, brought together scholars and church activists from twenty countries, including France, West Germany, Belgium, the United States, and most of Latin America.

If Columbus and his successors raise issues concerning the uses of memory for Latin Americans, then Chile was a particularly appropriate setting for such reflections. For Chile is in the process of determining to what extent it is necessary and healthful for an entire country to literally dig out its memories. Even as the July conference was in session, Chileans were uncovering bodies from the muddy flats of the Rio Mapocho, which neatly bisects Santiago. The remains themselves were something of an issue; there were reports that some poor neighborhoods near the river were posting sentries to prevent the removal of bones, clothing, or anything else that might cast light on the recent past, particularly 1973-1976, the most savage years of the Pinochet dictatorship. They were determined that these remnants would be preserved.

Even though the Santiago conference included many researchers and scholars, it differed from the usual academic gathering. To begin with, it had a decided public character, with thousands of posters plastered on the walls of the remarkably clean Metro. Radio, television, and the newspapers paid it respectful attention, and a number of events were designed to include the general public. Finally, while the participants held scholarly credentials, they also were clearly concerned with the political implications of their analyses. Jose Aldunate, a Jesuit who has become the personal symbol of the Sebastian Acevedo movement—the semiclandestine group that courageously held nonviolent actions during the last years of the Pinochet regime to protest torture and other human rights abuses—was a conspicuous presence. On the first full day of the conference, he and the Sebastian Acevedo movement led a nonviolent demonstration in downtown Santiago. For the first time since the Christian Democratic government took over in March, demonstrators were pummeled by the police. While the climate of fear has subsided in Chile, social divisions and abuses persist.

The Santiago conference was part of another, wider process, one among many attempts to influence the next CELAM (Conference of Latin American Bishops) meeting scheduled for Santo Domingo in 1992. The theoretical scaffolding for that meeting is already in place, the “final” draft of a working document entitled “A New Evangelization in a New Culture,” published in Bogota, Colombia, this past February. The theme reflects the intense interest of the Vatican, and is not to the liking of many progressive members of the Latin American church. Each word in the document’s title is significant. The focus for the conference as it is now set will be the “evangelization of culture.” This evangelization is seen as “new,” a clear reference to events of the sixteenth century. The contrast with previous CELAM meetings in Medellin (1968) and Puebla (1979), however, is sharp. At Medellin, the theme of Christian commitment to the poor was first developed in some detail, an emphasis repeated at Puebla. At both, participants faced the question: “What is the principal challenge for the evangelization of Latin America?” Their response (not without a struggle, it is true) was the poverty in which the majority of the continent was and is mired. The “new evangelization” of the working document for the Santo Domingo conference, on the other hand, suggests both a celebration and retrieval of the original evangelization of indigenous peoples, blacks, and the poor, without sufficiently assessing the torture and bloodshed not to mention political and economic interests—that accompanied that religious history. Furthermore, to speak of a new culture suggests a monolithic understanding of Latin America, one that does not adequately welcome the multiplicity of peoples, languages, cultures, and religious beliefs found in Latin America and the Caribbean. Historically, “forgetting” such pluralism has been an important factor in the oppression of many groups—Protestants (especially Evangelicals), women, the poor, blacks, workers—but especially the continent’s indigenous peoples. To retrieve their memories would be the necessary first step to begin understanding them today. Such an undertaking will not be easy. Even though an entire commission (one out of five) at the Santiago conference was devoted to indigenous peoples and popular religion, these peoples’ representatives were conspicuously omitted from the conference’s opening ceremonies. While the formal inauguration unfolded under powerful television lights at the National Library, three Mapuches (Chile’s largest indigenous group, which still makes up a sizable portion of the population in the south) were made to sit quietly off to the side. But their traditional ponchos and headbands, splashes of color in a sea of gray and blue business suits, could not be missed. And as the conference proceeded, the presence of indigenous peoples began to stand out with greater clarity. One of the most affecting moments occurred when Guaranf, Aymara, and Mapuches exulted in their similarities and differences as they and nonindigenous scholars discussed beliefs about God, nature, land, life, and death.

To my mind, Gerhard Kruip, a young German philosopher, was especially helpful in understanding why this particular conference proved so powerful. He discussed the memory of the victims of past struggles, which he called both “a condition for and a consequence of a liberating praxis in the present.” As a German, he is well aware of how important memory of the Nazi past is, not only for Jews and others who suffered so severely, but for Germans themselves. A parallel situation exists for Latin Americans. The memories of hundreds of years of deprivation must be recovered by the indigenous peoples in order for democracy and reform to have a chance in Latin America. As Gustavo Gutierrez has pointed out, in Latin America the question is not “How does one do theology after Auschwitz?” since every day one sees new violations of human rights. For Gutierrez, reflections on yesterday are pointless without actions against poverty today. Kruip would extend this observation to include its inverse, that all current political agendas must be rooted in the comprehension of past suffering.

Just this process seems to be happening today in Chile. The real miracle of Chile is not the export boom or the free-market economy currently drawing investments from around the world. (The country does look robust in comparison with Argentina, Brazil, and especially Peru.) The real miracle in Chile, as anyone who lived in Chile during the past seventeen years (as I and my family did in 1986) knows, is the apertura, the historical opening the country is experiencing. In moving quickly beyond the nightmares of its recent past, Chile is unified in a way that it seldom has been. Its attempt to build new political and social structures is based on the premise that no fruitful innovation is possible without recovering as much of the truth as possible. It is as if the country as a whole is pausing, both to take stock of what has happened and to assess what must be done to build a more stable and just society. There are dissidents from this consensus on both the left and the right, but so far they have not been able to prevent this search for memory. The national Commission for Truth and Reconciliation, for example, recently completed collecting data on human rights abuses during the past two decades, abuses which number in the thousands. The discovery of a mass grave in Pisagua in the north has forced everyone to think again of 1974 and 1975. Almost daily, new burial sites are discovered elsewhere, notably in the rural south. Relatives have been holding funerals for those who were summarily shot, and survivors of torture have been gathering at the casas de la seguridad (security houses) to recall what went on: the daily routines, the mannerisms of the torturers, exact dates and places, the names of others who did not survive. A significant number of Chile’s Christian Democrats, including the democratically elected president, Patricio Aylwin, are sensitive to the need not to whitewash the past. Vice-president of the party, Genaro Arriagada, reiterated to me several times Santayana’s warning about reliving history if we forget it. Gatherings such as the Santiago conference underscore his concern. The failure to remember has too often been the condition for historic cruelty, both at the personal and national levels.

Kenneth Aman teaches philosophy at Montclair State College in New Jersey. He recently completed a sabbatical in Chile and with Chilean sociologist Cristian Parker is editing a book on the popular culture of Chile for Westview Press.