The Principle of Cooperation
By Stephen J. Pope
Books 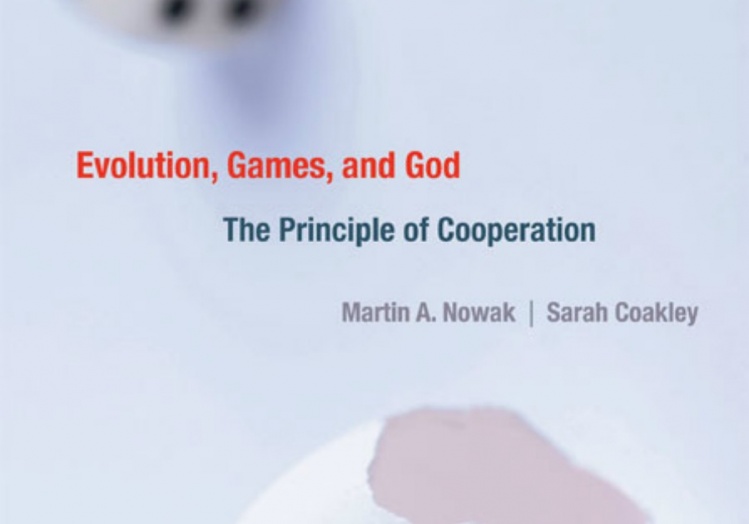 Nice guys finish last.” “Look out for number one.” Those and other bits of conventional wisdom testify to the grip modern individualism has on the popular imagination. If competition is the “real world,” then Christ’s message of inclusive love amounts to hopeless idealism. Evolution, Games, and God challenges us to think otherwise. The book came out of the work of a research group that met periodically for three years at Harvard under the leadership of theologian Sarah Coakley and mathematical biologist Martin Nowak.

The book’s purpose is to show that evolutionary processes can give rise to many forms of cooperation. After all, humans aren’t only competitive. We can be cooperative and altruistic too. More cooperative organisms sometimes beat out uncooperative organisms. Under some conditions, cooperation is stabilized in a population, and under others it’s eliminated. The development of our own species proceeded only because we can carry out large-scale ventures cooperatively.

The power of cooperation can be seen in key moments of transition in the evolutionary process. The shift from asexual reproduction to sexual reproduction, for example, involved a quantum jump in cooperative activities between organisms. Indeed, “whenever life discovers a new level or organization (such as the emergence of cells, multicellar organisms, insect societies, or human language),” Coakley and Nowak write, “cooperation is involved in one form or another.” Cooperation emerged as a central strategy used by organisms to cope with environmental challenges. Early humans lived in highly interdependent hunter-gatherer groups. Language allowed them to share what they had learned, to make plans for the future, and to communicate from a distance. The development of complex societies in the ancient world was made possible by the domestication of animals and development of large-scale agriculture.

The book takes its definition of cooperation from evolutionary biology: “a form of working together in which one individual pays a cost (in terms of fitness, whether genetic or cultural) and another gains a benefit as a result.” Nowak and Coakley distinguish cooperation from “altruism,” which they define as “a form of (costly) cooperation to which an individual is motivated by goodwill or love for another (or others).” The notion of love as willing the good of the other resonates with Thomas Aquinas’s “love of benevolence.” The vast background of evolutionary cooperation provides the natural conditions for the emergence of our distinctively human capacities for altruism.

Nowak is one of the world’s foremost mathematical biologists. He calls attention to the way modern evolutionary game theory helps explain the emergence of cooperation as a convergent evolutionary strategy. The Prisoner’s Dilemma game sets up a contest in which two players are required to choose how to interact with one another in a way that best advances their individual interests. There are two possible strategies: a cooperator pays a benefit (b) at some cost to herself (c); a cheat extracts a benefit from another player but at no cost to herself. In one-time interactions, the “most rational” strategy is to cheat the other player because that allows you to get a benefit at no cost to yourself. But if there are many interactions, then cooperation emerges as a successful strategy, because when cheats are identified nobody will cooperate with them anymore. Over time, selfish players become less “fit” than cooperators.

Nowak provides a concise summary of the five mechanisms that resolve social dilemmas in ways that involve cooperation: “kin selection,” “direct reciprocity,” “indirect reciprocity,” “network reciprocity” (or “special selection”), and “group selection.” Cooperation is more likely to emerge between agents who are biologically related than between those who are not; those who cooperate with kin are more likely to leave descendants than their less cooperative counterparts. The two forms of reciprocity involve trading benefits either directly (I help you and you help me, now or later) or indirectly (I help you now, then you help my friend, and then my friend helps me later).

It’s hard to overstate the significance of indirect reciprocity for human communities. We are naturally adapted to live in relatively small communities in which one person’s willingness to help another is based on the recipient’s reputation. Empirical studies have shown that we are more likely to help people with cooperative reputations. It is a losing evolutionary strategy to pay costs that benefit others without receiving any benefits in return. Some animals practice rudimentary indirect reciprocity, but humans have developed it in very robust ways. Doing so requires intelligence, memory, imagination, empathy, language, and other cognitive capacities that are distinctive to humanity. Indirect reciprocity is also one of the major building blocks of morality.

Nowak calls the fourth mechanism “network reciprocity.” In any given society, Nowak argues, cooperators benefit one another by forming network clusters within which they cooperate with one another. Spatial structures shape likelihood of cooperation. This resonates with ordinary experience, in that we are more prone to help or depend on well-known reciprocators in our own subcommunities than we are to help or depend on complete strangers.

The fifth mechanism, group selection, is the most controversial because it suggests that selection operates not only on individuals but also on groups. The model predicts that in situations in which groups compete with one another, those made up of pure cooperators are more successful than groups of pure cheats. At the same time, selection within groups of both cooperators and cheats tends to favor the cheats. This model proposes a multilevel process of natural selection in which lower-level selection (within groups) favors defectors but higher level selection (between groups) favors cooperators.

The five mechanisms work for game theory, but Coakley and Nowak—and others—think they also track features of real-world evolutionary processes. Human beings are wired for cooperation, possess a high capacity for empathy, and appreciate and reward loyalty. Conscience, our sense of right and wrong, is highly sensitive to issues of fairness.

Mapping evolutionary possibilities through game theory makes sense, but how does God fit in? Religion is one of the main expressions of our cooperative instincts. Some cognitive scientists of religion hypothesize that God functions as a kind of supernatural reciprocity monitor that enforces cooperation and punishes cheating. Theologians who emphasize the Cross regard theories of evolutionary cooperation as largely irrelevant to Christian ethics. The Gospel teaches unconditional love of neighbor, even if he’s a cheat. Theologians whose focus is the Incarnation seek to understand evolutionary building blocks, including cooperative tendencies, so they can be used for higher ends. Indeed, Coakley suggests that the Creator produced the fundamental conditions of the cosmos in such a way that it gave rise to an evolutionary process—with all its pain, contingency, creativity, and beauty—that in turn would lead to the emergence of intelligent beings capable of highly complex forms of cooperation. God works providentially both within the evolutionary process and from without it, Coakley writes, in order to elicit the potential for goodness present in the created order. The same is true for humanity. As created in the image of God, we are called to pattern our lives after a Triune God characterized by an eternal communion of love. We are called to center our lives on charity, a grace-inspired love that goes beyond trading costs and benefits to genuine friendship with God—and one another.

Coakley and Nowak’s book provides an excellent resource for anyone who wants to learn about current thinking at the nexus of evolutionary theory, ethics, and theology. The editors managed to avoid the unevenness of quality that marks many essay collections. The contributors engage one another, sometimes critically. This is one of the best books on this topic in the past decade.