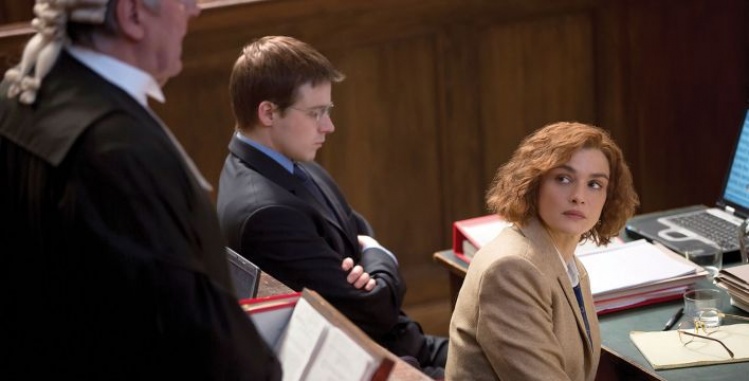 Is there any movie setting more familiar to Americans than the courtroom? When you stop to think how many of them you’ve racked up over the decades, it amounts to a veritable cinematic apprenticeship in trial law. My list includes Twelve Angry Men, To Kill a Mockingbird, Witness for the Prosecution, Anatomy of a Murder, The Firm, Erin Brockovich, Judgment at Nuremberg, Presumed Innocent, A Civil Action, A Few Good Men, Inherit the Wind, The Caine Mutiny, The Verdict. And that’s not to mention a thousand or so episodes of Law and Order.

Courtroom dramas pit unruly and even uncivilized human impulses against abstract codifications of justice, in a scrimmage refereed by Solomonic impartiality; it’s the dark societal id versus the shining superego of law. Nowhere is this collision more impactful than with crimes of genocide. Recent scholarship in genocide jurisprudence emphasizes the ways criminal law intersects with politics and history. As the work of the Holocaust legal scholar Lawrence Douglas has shown (Douglas is a friend), genocide-related jurisprudence can be at cross purposes with itself, its function as adjudicator and dispenser of individual justice competing with a larger pedagogical function, one involving history, morality, and collective memory. Do the trials of history’s mass political criminals require a courtroom, or a classroom?

That question informs Denial, Mick Jackson’s chronicle of a libel suit leveled against American scholar Deborah Lipstadt by David Irving, the renegade British historian whose works have minimized the scope of Nazi atrocities against the Jews. Irving’s career has straddled two worlds—the studious ambit of the academic historian he aspired to be, and the shadowy netherworld of Nazi sympathizers and Holocaust deniers to whom his writings increasingly gave propagandistic ammunition. In 1996 he brought suit against Lipstadt, an Emory University professor, charging that in portraying him as a falsifier and bigot in her book, Denying the Holocaust, she had willfully misrepresented his work and damaged his professional reputation. The ensuing trial tested not only Irving’s charge of libel, but by proxy our understanding of the Holocaust itself.

Denial starts promisingly, with a scene in which Irving crashes a lecture Lipstadt is giving in connection with her book, pulls a wad of cash out of his pocket, and offers a thousand bucks to anyone who can prove that Hitler ordered the killing of the Jews. Lipstadt has him thrown out of the room, and soon thereafter, Irving initiates his libel suit. British libel laws, Lipstadt learns to her dismay, work differently from U.S. ones. Instead of a presumption of innocence, Lipstadt as defendant is required to prove that what she wrote was not libelous—in other words, that Irving’s writings were not only errant, but tendentiously so.

That’s a high burden of proof—and a heavy burden for a filmmaker looking to tell a compelling human story. How to find drama in dealings that are preponderantly textual and interpretive? One way might have been to make the film center on the accuser. David Irving began as a respectable academic—his early works of military history were considered standard-setters, including his 1963 work The Destruction of Dresden—and the story of his disgrace would explore his deviating from consensus to embrace outlier ideas that eventually turned him into a pariah. What seduced Irving? When did he go astray, and how, and why?

Denial is not Irving’s story, however, but Lipstadt’s. And the problem is that there’s not much story to her story. Irving at least presents a conflict between his toxic views and his desire to be part of the old-boys club of British historians. But Lipstadt’s role is almost entirely an account of bearing burdens. The burden of having to accept her defense team’s decision not to let her testify, when she’s bursting with readiness to do so. The burden of being Jewish herself and having to deal with Holocaust survivors who beset her with demands to be allowed their turn on the stand. The burden of having to sit in the courtroom day after day and listen to Irving’s smug effrontery. And so on.

Rachel Weisz does her best as Lipstadt, but after that initial contretemps with Irving in the lecture hall, there is almost nothing for her to do, other than look worried when the case is underway, and intermittently burst out with American impatience at her crew of donnish and ironic British lawyers (headed by the always-affecting Tom Wilkinson). So what do you do when you’re a filmmaker and your protagonist’s role is static? Send her jogging! That’s the routine for Weisz’s character: the resort to furious jogging, followed by renewed frustration with the trial and her defense team...sighs and tears...then more jogging.

The film is so resolutely low-key, and sticks so close to the facts of the case, that it’s hard to know what the filmmakers thought they were giving us. Consider some of the classic courtroom dramas I listed above. Mockingbird placed the trial and Atticus’s role in it within the larger social field of racism and the South, and moreover refracted it through the perspective of his inquisitive children. Twelve Angry Men gave us the fractious byplay among deliberating jury members, each cast to represent an archetypal character virtue or vice. A Few Good Men placed us so fully inside the throes of the defense team that each setback sparked vicarious dismay, and each breakthrough, jubilation. There’s nothing like this in Denial. The film’s big crisis comes near the end of the trial when the bewigged judge, seemingly a figure of reticent probity, suddenly intrudes the notion that perhaps Irving is a true-believing anti-Semite, and as such can’t be accused, technically, of lying, since he believes his falsehoods. This is supposed to hit with the brunt of a crushing setback, but most viewers are likely to feel little beyond puzzlement. It certainly doesn’t rival “You can’t handle the truth!” for drama.

The film’s near-total refusal to explore its protagonists’ private lives complicates the attempt to wring suspense from the trial and the wait for a verdict—Jackson is actually forced to resort, more than once, to closeups of the second hand of a clock going around as Lipstadt waits. Equally problematic is the attempt to make large consequences hinge on such procedural issues as the decision about who should and shouldn’t testify. Such questions are in fact fascinating and important—the importance of survivor testimony and its limitations is a staple of Holocaust law commentary—but they conduce to documentary treatment rather than dramatic.

Denial comes off as preachy, obvious, and severely limited; it gets the basics of the story told, but little more. Even the stronger moments fall strangely flat. There’s an early interlude in which Lipstadt and her lawyers visit Auschwitz, and the view of the former death camp, drained of color on a foggy winter morning, strikes a somber visual note; but the scene, culminating with Weisz and one of her lawyers reciting a Hebrew prayer, lacks organic connection to a larger dramatic whole, and comes off as forced and sentimental. Though the script was written by the accomplished playwright David Hare, there’s little evidence of a playwright’s discerning ear. The heavy reliance on trial transcripts doesn’t help; and when Hare has Lipstadt tremulously vowing to Holocaust survivors that “I promise you—your voices will be heard!”, I’m guessing, or hoping, that he felt obligated to take that directly from Lipstadt’s memoir of the trial, without improvement.

Denial is well stocked with Holocaust 101 teaching points, its potted mini-lessons in history and morality creating awkward moments when you feel a scene being stuffed with exposition so that, well, the kids will understand. Which goes to show, I guess, that a trial may be used for teaching and still be a good trial; but a movie, not so much.