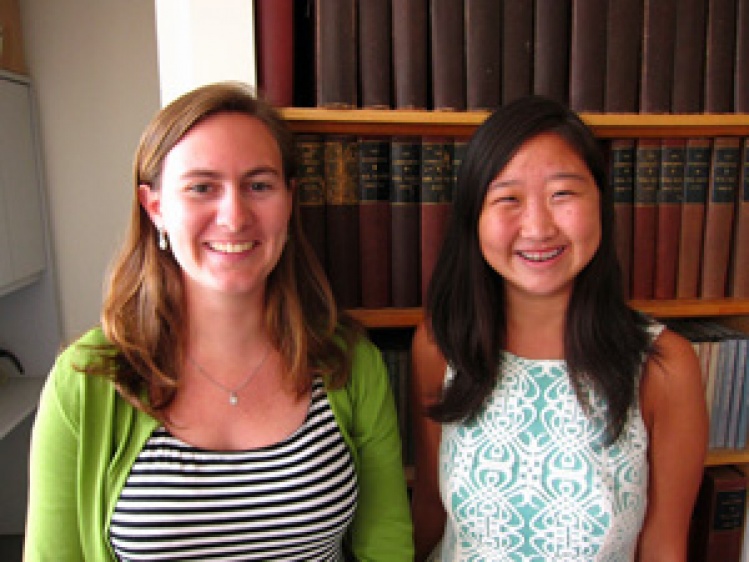 Most news stories this summer about interns haven’t been positive, from the NTSB summer intern fired for “overstepping the bounds of his authority” to the obscene rant from New York’s most troubled mayoral campaign about their intern who spilled dirt to the tabloids.

At Commonweal, things were very different. I want to introduce you to Joanna Gardner and Sara Bovat, who were here for all too brief a time this summer as our interns — not only because they did such good work, but in the hope that dotCommonweal readers will let other talented young people know that being here can be a good experience. (Information here about our internship program.)

Joanna, a recent Catholic University graduate, is spending the next year with Amigos de Jesus in Honduras, while Sara is heading back for her senior year at Holy Cross. We wish them the best. Here’s what they had to say about their summer.

As a new intern, you never really know what you’re walking into. You could become immersed in a challenging project, or find yourself doing the proverbial coffee-fetching for three months. Going into an internship with Commonweal, I wasn’t too worried about facing a summer of “sugar or sweetener?” but I was still nervous, intimidated by my admiration of the magazine, as I walked into the office on my first day. Now, at the end of a great summer, the familiarity of the office and the people in it is all the more amazing because of those initial nerves and uncertainty.

From sitting in on headline meetings, to proof-reading manuscripts, to working on our own community organizing project, to joining the entire staff for lunch each day, we interns were fully incorporated into the life of the magazine. We were made to feel welcome and included from the very beginning. I could tally off a list of the “real-world” experiences I’ve gained from the summer, full of the kinds of buzz-words that every college intern snatches up greedily from his or her experience: social media (that golden calf), community organizing, proof-reading and editing, to name a few. However, when I think back on the summer, I’m grateful for these things, but they seem like side dishes to a much richer fare of experiences. And chief among them is the sense I got that I mattered as a part of the Commonweal staff this summer, that I could make a contribution. For an intern here, the possibilities are really only bounded by how much you are willing to do, and the relationships formed are not to be left behind.

Our chief project was organizing Commonweal Readers Communities, a new initiative aimed at bringing subscribers together in local settings to discuss the magazine and form relationships with one another. (As a bit of shameless advertising, you can check out the webpage for these groups.) One of the best parts was working with the readers themselves and being surprised again and again by their willingness and excitement at becoming involved. Commonweal readers are a special bunch; as the summer progressed, I began to feel myself why they had such a devotion to the magazine and what it does.

Reading through more articles of Commonweal than I ever had before – whether in past issues as part of a compilation project, or in new ones not even gone to press yet as a proof-reader – I was faced again and again with challenges to my assumptions and opinions. I was forced to think deeply about not only what I think, but how I go about thinking it. The writers for Commonweal are not shallow rhetoric-channelers; they are scholars who craft opinion. And in a media environment with an endless, voracious appetite for rapidly produced and disseminated content, such careful thinking and writing is like a breath of fresh air.

I didn’t only learn about what makes for good writing and good opinionating by reading the magazine. I also learned by watching the Commonweal staff interact. At each afternoon’s lunch, everyone from the editors to the interns sit around the same table. Through the laughter and conversation of those lunches, I saw a group of people united by a common purpose and delighting in one another because of it; a group who could talk about the challenges facing the church, the winner of the Stanley Cup, a new development in politics, and a particular work of literature all in one sitting. It was like watching the magazine come to life. Ultimately I wanted to work for Commonweal because I love what the magazine does; the best part about working for them this summer has been the realization that every single person on their staff has no other motive but this.

Gradually throughout the summer I’ve formed new, clearer ideas about why Commonweal is so special and so necessary. What I’ve discovered here is a unique platform at once faithful and challenging; where poetry and politics and theology can exist side by side; that explores doubts and considers new ideas; that, above all, questions out of love. To me, the honesty of Commonweal makes it indispensable to the future of the Church; I see no other way forward.

To other past interns, the mission may have looked slightly different, but the effect has been the same, I’m sure. And that is a sense of pride in anything I may have been able to contribute as an intern, and a great sense of gratitude for the beyond-the-resume experiences I’ve had this summer in this real-life classroom. There is nothing better as a student than working for something you believe in; except maybe getting to do it side-by-side with people who feel the same, love one another for it, are immensely good at what they do, and yet are still humble enough to make you feel important.

Students may try to find that kind of internship elsewhere, but it will be a difficult task.

Family: A Catholic value embraced from the creation of man and woman in the Genesis to the dinner tables of contemporary American families. The family dinner is a staple of togetherness and intimacy where time seems to still for those cherished thirty to forty minutes in between the long list of scheduled appointments and affairs of a typical day. It’s where families can converse about the current of events of both their private and public lives, challenge their loved ones, and cherish one another.

The focal point of my experience as an intern at Commonweal this summer has been our “family” meal. Shortly after 1 p.m. each day, the several editors, publisher, and interns would put aside their manuscripts or Excel spreadsheets, and file one-by-one to the office lunch table. Similar to the casualness of my own family’s dinner table conversation, each day brought a new exchange of anecdotes, debates on current controversies, reviews of recently seen films, and of course, laughter. At one moment, we can be having a philosophical debate about an animal’s ability to love and at the next, laughing over honeymoon horror stories. Even though many of the staff members have eaten lunch together for years, I felt welcomed as if I was just as much of a member of the Commonweal family as everyone else at the table.

As a rising senior at the College of the Holy Cross who has been desperately occupying most of her free thoughts with possible post-graduation plans, intellectual curiosity, spirituality, and community have become a priority in every aspect of my life. What has been the most satisfying aspect of my internship at Commonweal is that I have found them here, while also having the opportunity to learn about the ins-and-outs of magazine journalism, a field that I have always been passionate about. Reading manuscripts, brainstorming headlines, and proofreading galleys on cultural and political topics are all tasks that the intellectual writer in me looks forward to; but, the academic and Catholic communal atmosphere of Commonweal consistently reminds me why I ultimately do it – a genuine interest in hearing others’ opinions and a chance to respond back, even if the response is a brief phrase or two on a manuscript’s report.

One extensive project that Joanna and I have feverishly been working on this summer has connected us with people who live their life with the pursuit of similar values. We have initiated Commonweal Readers’ Communities, a program where Commonweal readers have stepped up to host discussion groups in their local areas. Throughout the process, we have had the pleasure to talk with readers from across the country who all seem to have two special things in common – their love for learning and their excitement to share with others who feel the same way.

We Commonweal folk simply can’t stop talking – talking about our Catholic journeys, talking about the secular world that we live in, but most importantly, talking to each other.

The War on Beige