The World in Its Glory
By Anthony Domestico
Books
Poetry 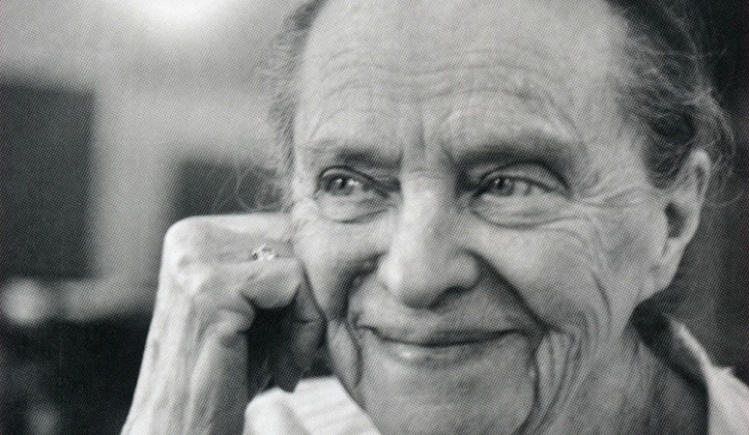 Marie Ponsot has had a remarkable, and remarkably long, career. Her debut collection, True Minds, was published way back in 1956—a distant time when Allen Ginsberg, Robert Lowell, and Elizabeth Bishop strode the earth. The first poem in that book, and the first poem in her new Collected Poems, is “Take My Disproportionate Desire.” It speaks in a voice that is confident and complicated, rich but not overwrought. Above all else, it speaks in a voice that is attentive—attentive to itself and to the world it speaks of and through:

Enough of expressionist flowers lions and wheat,
Let us consider our separate needs
Here in this beautiful city of delicate surfaces
That a touch makes bleed.

Ponsot has said that poetic “forms create an almost bodily pleasure in the poet.” She lives and works within poetic forms, but she also tweaks and torques them. In its use of rhyme and regular stanza structure, for instance, “Take My Disproportionate Desire” shows the joy of form even while it urges us to turn in new directions, away from the familiar tropes of “flowers lions and wheat.”

Another early poem, “Espousal,” also embraces and enlivens formal regularity. Fourteen lines long, this sonnet organizes itself not into three quatrains and a concluding rhymed couplet, as the traditional Shakespearean sonnet would, nor into the Petrarchan sonnet’s octave and sestet, but into four tercets and a concluding unrhymed couplet. The shorter stanzas give the poem great velocity—appropriate enough for a poem that is about the anarchic force of love.

The speaker opens with a declaration—“Glad that we love and good at it, we riot in it”—and goes on to command the world around her to answer to this riotousness: “Hurry, we shout to the tree-soft hills.” The world responds to her command, matching the riot of love with its own vigorous activity: the hills “Lapse back; the free rivers trapped at the dam strive / Beautifully to follow the big swathe of our course. // The shot sun leaps; he whirls; he plummets to fall / Cut out of heaven by our bow-hot knives.” Paradoxically, it’s through the restraint of the sonnet form (albeit a strange and off-kilter sonnet form) that Ponsot expresses love’s radical and enlivening power. In “Espousal,” it is form and love, order and energy, that are espoused to one another.

The much later “Summer Sestina” performs a similar marriage of the formed and the extravagant. The poem, which is dedicated to Commonweal’s poetry editor, Rosemary Deen, employs the fixed form of the sestina: six stanzas of six lines each, all using the same six end-words in different sequence, followed by an envoi, a three-line concluding stanza that includes the poem’s six end-words. Here is the poem’s concluding stanza:

By her teaching there we are changed, colored,
Made ready for evening, reconciled to earth,
Gardened to richness by her spendthrift light.

That last line celebrates the delights offered by poetic form—how structural extravagance (say, the inventiveness called forth by the sestina’s complex structural demands) might cultivate all kinds of “richness.” Form, pattern, order: Ponsot suggests that all of these color and change us precisely by making us ready for evening (death) and reconciling us to earth (our physical embodiment)—a readying and reconciling that makes the world richer, fuller, deeper.

W. H. Auden once said that his first thought on encountering a new poem was, “Here is a verbal contraption. How does it work?” Ponsot clearly rewards such attention to the poem as a verbal contraption, a patterned sequence of rhymes and rhythms. But if a poem marks itself off from prose in part by its intricate formal engineering, it also defines itself by a surplus of energy and desire. Poetry is life-affirming in a deep, even theological sense. A true poem has life, and it has it more abundantly than other kinds of language.

And so it is with Ponsot’s poetry. The first poem in Collected Poems, “Take My Disproportionate Desire,” ends with a strong declaration: “I need that passion, miracle, / Incautious faith. To only you I offer it.” Passion, miracle, and faith: True Minds and the collections that followed—including 1981’s Admit Impediment, 1998’s The Bird Catcher, 2002’s Springing, and 2009’s Easy—contain all these things in abundance. There is passion for, and faith in, music and painting, flowers and philosophy, God and the “city seeing loving I cry / Is holy.”

Ponsot is one of our great religious poets. By this I mean not only that she writes great poems with religious themes or imagery (though she does), but also that, like Gerard Manley Hopkins, her poems attend to the sacredness of experience—to the glory that can be found in the mind’s musings, in the body’s pleasure, as well as its suffering. In “Why Vow,” Ponsot describes how Hopkins “holds / that his self is unlost,” a theological first principle that his work asserts again and again, despite the darkness of the world: “Obedient: he said he would. / He did as he said. He did / as he was told. He could / good as gold, hold good.” Ponsot also holds the world to be good, to be glorious, and her poems help us attend to the miracle of consciousness and the startling nature of sensory experience: “instantly everyone’s cup is clean, bright, full / of a supreme wine, / its ripe light still.” Want to know what it’s like to see—and to see truly—the migration of birds from New York in September? Read “In Abeyance,” where Ponsot describes the “hours of disembodiment, selves tossed out to vision,” as she sees hawks “ebb from us, emigrant, / their perspective on or in / the now of air, transfiguring.” Interested in what differentiates childhood vision from adult vision? Read “For Denis at Ten,” which ends, “He goes there, whistling. / Nothing reminds him of something. / He sees what is there to see.” Like the hawk, Ponsot transfigures the world; like the child, she sees the world as it is.

The poet Christian Wiman has said, “I don’t really believe in Collected Poems. They’re almost always bad. The bad so far outweighs the good, I mean, that you’re left with a negative impression of even truly great poets like Frost or Stevens.” Well, Ponsot’s book offers an astonishingly high proportion of good to bad—a sure sign, I think, of her greatness. She has been publishing poetry for fifty years, with the past twenty being her most productive: the poems written during that period take up more than half the pages of the Collected Poems. Now ninety-five, Ponsot continues to publish regularly. Her most recent poems, many of which first appeared in Commonweal (where she was once poetry editor), still dazzle with their learnedness (“Against Fierce Secrets” grows out of Yeats’s “Among School Children,” for instance) and with their sharpness of phrasing. “I like to drink my language in / straight up, no ice no twist no spin.” That’s about as good an opening to a poem as you can get.