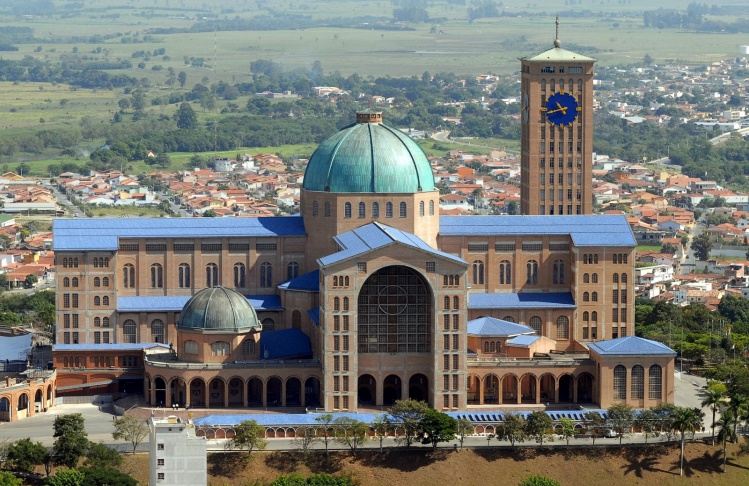 Aparecida is the most important Marian shrine in Brazil. Last May it was also the site of the fifth general conference of the bishops of Latin America and the Caribbean (celam). These general CELAM conferences are unique, a type of synod that periodically comes together to set pastoral priorities for the church of an entire region.

CELAM’s first general conference was held in Rio de Janeiro in 1955. It was followed in 1968 by one in Medellín, Colombia. The third was held in Puebla, Mexico, in 1979, followed by Santo Domingo, Dominican Republic, in 1992. Except for the Rio conference, the pope has inaugurated each meeting. Themes for the meetings are generally announced several years before the conference, and commissions are assigned to develop a working document.

The general theme for Aparecida was disciples and missioners: what it means to be a faithful disciple of Christ, and the church’s mission today in Latin America and the Caribbean. For the first time, bishops from the United States and Canada were invited not only to observe but to participate and to vote. Besides 162 bishops, there were 110 other representatives, including theological experts, religious men and women, and members of the laity. Although not everyone could vote, all took part in the discussions concerning the final document.

Pope Benedict XVI set the tone for the two-week meeting with his address on May 13. It was a carefully drafted theo- logical challenge that, along with the working document, came to serve as the basis for the discussions that followed. The pope gave some clear recommendations but left room for collegial discernment and decision making. One small but very human anecdote: During the pope’s lengthy opening discourse, he noticed that some of his listeners were nodding, not in approval but out of fatigue. He stopped and offered a stretch break, and it seemed to make the rest of his presentation easier to follow.

Aparecida’s final document (311 pages, titled The Fifth General Conference of the Latin American and Caribbean Bishops) offers a well-developed theological-pastoral ecclesiology. It is the product of serious deliberations on the part of bishops, theologians, priests, religious, and laity. I don’t know of another continent or region that has developed such a rich tradition of theological elaboration as celam. Both Aparecida’s preparatory document and its final statement give evidence of this distinctive aspect of Latin-American theology. Western theology is often produced by individual scholars, but most Latin American theology has emerged collectively.

The Vatican did insist on making some changes in the final document, but the substance of Aparecida remains intact. It reaffirms the general theological approach and methodology used at Medellín and Puebla: ver, juzgar, y actuar—see, judge, and act. One cannot do theological reflection in a vacuum or design effective pastoral plans simply by reiterating previous church teaching. To evangelize today, the church must immerse itself in the realities of the times, and in the spirit of Gaudium et spes, it must heed the cries of society’s victims. Christianity is about life—life in abundance. This abundant life comes to completion in heaven, but it begins here and now. Once we are aware of the real-world challenges we face, we reread the Gospels and the teachings of the church to discern their meaning for discipleship and mission today.

Globalization became a prism for the deliberations at Aparecida. The conference recognized the advantages of globalization—the benefit of new technologies, the paths they open toward greater human unity and prosperity, etc.—but it also noted that the process “promotes inequalities and multiple injustices.” How can the church help create new forms of globalization based on solidarity, justice, and respect for human rights and the environment? Aparecida begins by looking at the disfigured lives of the victims of globalization, particularly those excluded from its benefits. Reading the document, I came to the stark realization that the more humanity seems to develop, the more we find ways to exclude others we don’t want around. But to alleviate their misery, their cries must first be heard. In the time of colonial Mexico, Christians rejected human sacrifice as practiced by the Aztecs. Today, new varieties of such sacrifice are rampant, contemporary forms of human sacrifice offered to the god of profit, but not recognized as such.

The final document condemns the plight of millions of undocumented Latin American immigrants in the United States, people it terms “disposable.” Throughout Latin America, globalization has eliminated jobs. The choice facing many fathers and mothers is either to starve or to migrate. Often these immigrants work in this country for less than the U.S. minimum wage and have little legal protection. When sickness or disability strikes, they are simply dismissed by employers and others quickly take their place. These undocumented immigrants are doing the work we or our children don’t want to do. But instead of thanking them, we are now trying to criminalize them. Government raids in search of illegal immigrants have broken up families and orphaned young children. Church leaders have made attempts to protest, but Catholics in general have remained silent. Some have even joined the movement to evict the undocumented. This is one of the greatest challenges facing American Catholics today: Can we see the face of Christ in the people we are deporting?

Aparecida strongly reaffirmed the church’s preferential option for the poor. As Benedict XVI noted in his address, “the preferential option for the poor is implicit in the Christological faith in the God who makes himself poor for us so as to enrich us with his poverty.” One of the most beautiful passages of the Aparecida document personalizes this option for the poor. The point is not to exclude people but to include everyone. It is not about protest marches but about friendship. For the preferential option begins by seeing the poor not as objects of pity but as brothers and sisters. Only then can we “recognize their immense dignity and their sacred value in the eyes of Christ who was poor and excluded like them.” The option for the poor is not merely a matter of doing social work but of creating relationships of love that will bring about social, economic, and cultural change. Precisely because they are our brothers and sisters, we must become advocates and defenders of the poor.

Another important feature of Aparecida is its positive treatment of women. They are equal in both dignity and responsibility in the family, the church, and in society. The document laments all violence against women, especially poor indigenous and African-American women. Wherever there is oppression, women are doubly oppressed. One important way to change this would be to eliminate the “machista mentality” that ignores the Christian sense of equality between women and men.

Popular expressions of the faith are at the very heart of Latin American Catholicism. For Aparecida, these are sources of strength and hope in the most desperate circumstances. A very tender, theologically challenging section of the Aparecida statement deals with Christ in popular piety. Such piety has often been dismissed as simplistic, unenlightened folklore. Some have called it the opium of the people, while others have tried to replace it with what they deem “proper liturgy.” Catholics, Protestants, and Evangelicals alike have sometimes described it as superstitious, pagan, idolatrous, or syncretistic. Yet the document quotes Benedict’s statement that popular piety is “the soul and precious treasure of the peoples of Latin America.” The pope has invited participants to promote these authentic expressions of the Catholic faith as a valuable dimension of Latin American culture.

The CELAM statement describes some of the main expressions of this spirituality: its feasts, novenas, rosaries, processions, love of the saints, personal intimacy with Jesus and Mary, and home altars. Popular spirituality is here described as a distinctive form of Christian spirituality. It includes a deep sense of transcendence, of dependence on God, and an experience of supernatural wisdom that has to do less with illumination of the mind than with the action of divine grace on the heart. Through such an encounter with the living Lord, it integrates the corporal, the sensual, the symbolic, and the deepest needs of the person and the community.

I had never really thought of popular piety as a school of spirituality, akin to other well-developed forms of spirituality, but the more I have reflected on this aspect of the document, the more I have come to appreciate its depth and importance. As Jesus said in his prayer of praise, “I give praise to you, Father, Lord of heaven and earth, for although you have hidden these things from the wise and the learned you have revealed them to the childlike” (Matthew 11:25). This form of spirituality ought to be considered a privileged one. It is the spirituality of the poor, the neglected, and the excluded, and if God has preferential care for them, their spiritual expressions ought to enrich our own personal encounters with the living God.

There are many other important themes developed in the Aparecida document, including the ongoing contribution of the Christian base communities to the church in Latin America. Another theme is the importance of art for catechesis. Latin Americans have always communicated through the visual arts. Some of the earliest post-Columbian manuscripts made wide use of images. Our murals are a powerful example of the communicative efficacy of the image, and they could become a great resource for our catechetical programs. Even more exciting is Aparecida’s instruction that “it is fundamental for liturgical celebrations to incorporate artistic elements that can transform and help the faithful for their encounter with Christ.” Here the document is building on the earliest evangelization of Latin America. To the degree that the new evangelization picks up on this tradition it will produce richer results than a mere preaching of the word.

Other key issues in the final document include the importance and preservation of culture; proper care of the environment; the use of modern media in proclaiming the gospel; and the formation of disciples and missioners who can dedicate themselves to work on every level of society.

One of the things that most fascinates me about the CELAM document is that while it is very realistic about the problems facing the Latin American church, it is also full of joy and hope. It is a great and successful attempt to immerse the church in the depths of our times and to offer, in the light of the gospel, a new and better life for all.