The Babel of (Post)Christian Rock 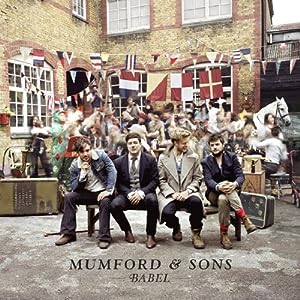 Babel, the second album from the British folk-pop group Mumford & Sons, debuted at #1 on Billboard's list of the top 200 albums three weeks ago, where it still reigns. Since their first album, Sigh No More, was released two years ago, reactions to Mumford's brand of (post)Christian salvation rock have been polarized. On the one hand, similarly-bent secular preachers, like Bob Dylan and Bruce Springsteen, have embraced the band as carrying on the sacred tradition of bringing hope to the masses through song. On the other hand, rock critics have expressed everything from reserved admiration to disdain for what many take to be a shallow call for SUV solidarity stemming more from privileged suburban nostalgia for a time before private school tuitions than a hard-won, working class rage against the machine.

In addition to attending posh private schools in England, bandleader and principle songwriter Marcus Mumford was raised by parents who are still active in the Vineyard Church movement in the UK, a non-denominational, evangelical, Protestant ministry that was important for inspiring a number of Christophilic rock musicians beginning in the 1970's---including, briefly, Dylan himself. For his part, Mumford has followed what is by now a pretty common script for musicians raised in such a devout environment. He has capitalized on the emotional power of the percussive swells and apocalyptic shouts of the sanctuary, while trading talk of heaven and hell, sin and redemption for this-worldly dreams of family, peace, and prosperity. Of course, the ur-band for this kind of supersonic, secular transcendence is U2, who were dreaming of a place where the streets have no name before Mumford began to contemplate the anxiety-inducing weight of his own.In his review of Babel for Spin, Chuck Eddy hears Mumford's desire to be the next Bono all over the record, and he is no less annoyed at this inherited, rock-hard earnestness for its honest, pop-rock pedigree:


Consciously or not, U2-style evangelism is all over the Mumfords' bland but biblically titled second album, Babel: blatantly in the pompous vowel-stretching climaxes of "Whispers in the Dark" and "Lover of the Light," but really wherever keening harmonies reach for heaven the way arms stretch to the sky, as the opening title track puts it. (Though, hmm: Isn't the Tower of Babel's moral that we can't scale heaven?) Several songs feature yelping woooos, and tests of despair and temptation are triumphed over at every turn. "A brush with the devil can clear your mind and straighten your spine." "When I'm on my knees I still believe." "Hope in the darkness, so that I may hear the light." "Ghosts in my head / They run wild and wish me dead." "Shake my ash to the wind / Lord forget all my sins." "I was under your spell when I was told by Jesus all was well." All this amid thoughts of Hell, clouded minds and heavy hearts, fickle flesh keeping heart and soul in place, and love that loves with urgency, not haste. These bromides are approximately as deep as Matchbox Twenty's, and as smug as Dave Matthews'.

NPR's rock critic Ann Powers has a different take, however:


What Bono and his mates figured out early on was how to connect a specific set of concerns formed within religious practice to other cultural forms literature, soul music, cinema where similar seekers were expressing themselves. U2 never became a "secular" band; its music simply relies on the fact that religion, for better and worse, is everywhere. Mumford & Sons does something similar, and by doing it now, it's filling a gap in pop music. I know the feeling that radiates from a room full of Mumford fans singing along with every overly sincere, earnest word; I've been there myself. At sixteen, I was a confused Catholic kid struggling to figure out how I could be my parents' daughter and still want to make out with boys, dye my hair funny colors and dance all night to ridiculously loud music. U2's music didn't present an alternative to the church life that had made me, in part, who I was then; it showed me how to struggle within that life, and get to the point where I could either walk on within it or walk away.

Like Powers, I also sympathize with the desire to find a non-sectarian language to express the adolescent trials and triumphs of trying to live up to the virtuous expectations of one's family and community, which eventually congeal into a conscience. Yet, like Eddy, I also suspect this particular problem belongs to a very specific religiously-packaged, socioeconomic demographic, which is ultimately at odds with the rural, folk revival aesthetic that Mumford is selling. While adolescent, suburban angst might be an "authentic" experience, there is something incongruous about marrying it to a form that recalls a life of hardscrabble labor in the face of adult temptations that go beyond "making out with boys" and "dyeing my hair."

From a theological perspective, it also seems to me that a similar dissonance occurs when one simply scoops God out of the sacred folk form and replaces it with what amounts to a more sophisticated game of "she loves me, she loves me not." This is not to say that there isn't a place for a more universal articulation of the transcendent in popular music, but the more successful artists, like The Hold Steady and Drive-By Truckers, don't just poach the harvest and forget the harrow. When Craig Finn sings about "How a Resurrection Really Feels," he reminds us that what haunts us this side of paradise is not just the possibility of a bad hair day or being a middling middle-classer, but death. Similarly, when Patterson Hood offers up "Buckets of Mercy," he is going to help you hide the bodies, not just improve your own. Even Bono, for that matter, saved his most potent anthemic arsenal for "Sunday Bloody Sunday," before getting comfortable and turning out pop tunes that could soundtrack any old Sunday, boring Sunday.For its failure to recognize the full range of light and dark that sacred art forms traditionally attempt to embrace, I think that Powers' defense of Mumford's (post)Christian gospel, as speaking to themerelyadolescent hopes and fears of average folk, is precisely what turns secular critics like Eddy off. Adult seekers want adult-sized salvation. So, if (post)religionists are going to take their evangelical fervor out of the church, they better make sure they have a transcendent message to match. Otherwise, they risk encouraging listeners to reach out for the ungraspable ghost of a God who is no longer there, leaving them with answers too small for the questions they ask.