From the Archives: After the Murder of Martin Luther King Jr.

By John Deedy
Race
Domestic Affairs
From the Archives 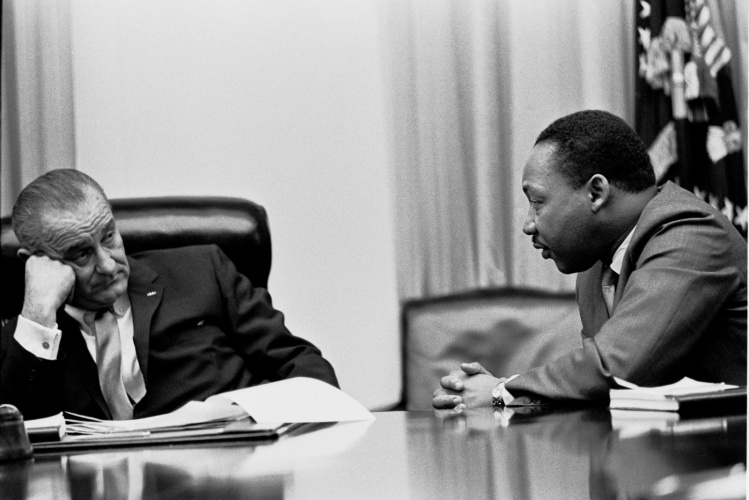 This piece first appeared in the April 19, 1968 issue of Commonweal

The hot summer of 1968 arrived on the eighth day of spring, and in manner to make a prophet out of that unlikely sage, Adam Clayton Powell.

“The day of Martin Luther King has come to an end,” Mr. Powell exclaimed during his triumphal return to Harlem. And a few days later, March 28, Memphis exploded, as Dr. King led the protest march which sought to shake from unreconstructed city fathers recognition of a union and a paltry 7₵ more per hour to settle Memphis’ sanitation workers’ strike.

“The era of reasonable, meaningful non-violence is not over,” Dr. King had asserted a few days earlier, partially to put to rest uneasiness that surrounded the Poor People’s Campaign he was to take to Washington on April 22. But the March 28 violence in Memphis provided the first clue: non-violence has lost much of its grip on the black civil rights movement. And with the murder of Dr. King, there is screaming evidence that black non-violence is about as dead as Powell implied. No need to reason why.

If non-violence disappears entirely among blacks, it will be because white intransigence has once again left them without alternatives in the rights struggle. Take Memphis. The issues were minor ones, but the inflexibility of white city officials twisted the tensions in racial directions. A week before the March 28 violence, the Southern Regional Council warned that the handling of the sanitation strike was triggering the release of built-up resentment in the Negro community. City fathers remained unheeding and the March 28 violence became something of an inevitability.

Then followed the white violence that was the murder of Martin Luther King.

It is possible that that violence, like the March 28 violence, has complex roots in causes beyond immediate issues. The difference is that the roots of white racial resentment are in the negativisms of the American system and possess none— none—of the qualities that redeem and justify black resentment.

And what a memorable year this has been for the hypocrisy on which to fester the racial resentment of the crackpot white.

And what a memorable year this has been for the hypocrisy on which to fester the racial resentment of the crackpot white.
sharetweet

1968, be it remembered, is a year that bowed in with Congress sitting silent to that section of the State of the Union message which proposed new rights legislation, but applauding mightily the pledge to curb “rising crime and lawlessness” in the streets; a year which has seen both President and Vice President virtually disown the report of the presidential Commission on Civil Disorders; a year in which cities stockpiled riot equipment, while Congress pared more funds from poverty programs (45 anti-poverty proiects in New York City alone had their funds cut off on March 31); a year in which the Congress got so hung up on rights legislation that, in an attempt to snap it into action, the President lapsed into Texas vernacular: “quit fiddling and piddling.”

More than enough to fire up the white crackpot.

A pity of Dr. King’s murder is that for a few days before his gunning down it was possible to speculate that Mr. Johnson’s decision to seek peace and leave the Presidency would ease ghetto pressures by infusing in ghetto dwellers the hope that a new President would bring new priorities to the solving of their problems. That talk was quickly dead; maybe it was never even realistic; maybe the mood of the nation should have discouraged it from the very beginning.

Mr. Johnson himself typified that mood the day after the March 28 disturbances when he reaffirmed determination to meet “mindless violence” with what amounts to the organized violence of tanks and troops, police and pistols, gas clubs and police dogs.

More to fire up the crackpot.

Fierce breast-beatings have followed the murder of Martin Luther King, but they have a faintly fraudulent thump. And they do not alter the essential fact that it was more than one man who murdered Dr. King in Memphis. It was a nation of hypocrites and white racists.