A Riveting Documentary on Amy Winehouse
By Richard Alleva
Movies 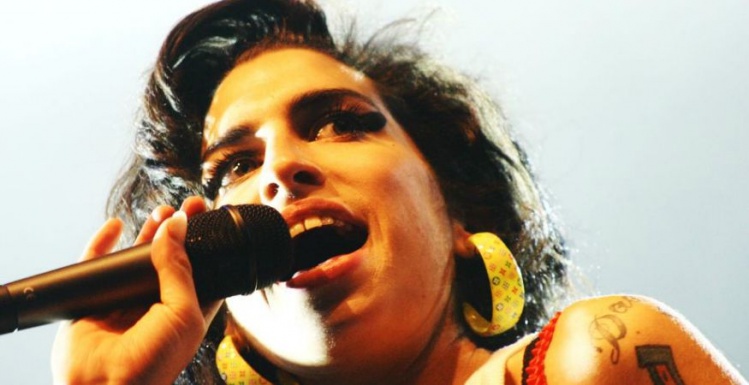 Right after I saw Asif Kapadia’s riveting documentary Amy, about the brilliantly talented and pathetically vulnerable pop singer Amy Winehouse, some observations about Dylan Thomas by the novelist-critic Elizabeth Hardwick floated up from the recesses of my memory. So I tracked them down:

The urgency of his drinking, his uncontrollable destructiveness seemed to add what was needed beyond his talents. He was both a success and a failure in a way we find particularly appealing.... He had everything and “threw it all away.”... He was a wild genius who needed caring for.... Even excess, carried off with so great a degree of authenticity and compulsiveness, has a kind of chic.

Most of that also applies to Winehouse. Like the Welsh poet, who did some of his finest work while still in his teens, she was a prodigy who, at nineteen, revealed a talent comparable to that of some of her idols, such as Billie Holiday and Tony Bennett. But, also like Thomas, Winehouse “threw it all away” to feed her addictions. And if Thomas both needed and defied his friends and caregivers, ducking into the White Horse Tavern in Greenwich Village for endless whiskeys, Winehouse assured her listeners, with her most popular song, “Rehab,” that she wasn’t having any, having taken a lover who hastened her end by using her money to buy drugs for both of them. And like Dylan the drunk who competes with Thomas the poet for fame, Amy the squalid disgrace is still just as clearly printed on the public’s memory as Winehouse the careful crafter and performer of some unforgettable songs. (The film makes it clear that she was no rock ’n’ roller but a jazz musician of the highest order.)

But Hardwick’s comment about Thomas’s “chic” definitely does not apply to Winehouse. Nowadays, public displays of messy excess reach us through a social media whose keynote response is derision. Thomas’s stunts became amusing anecdotes while Winehouse’s were posted on YouTube. Kapadia includes montages of late-night British and American TV hosts getting mileage out of the singer’s deterioration. “Rehab,” though intended ironically, only aggravated the derision. All the world loves a winner? Yes, but especially when a winner becomes a loser, for then the cameras really have something to feast on. For example: a booze-sodden and love-smitten Winehouse (during a photo shoot) circling her midriff with a knife and claiming that she’d like to carve the name of her lover, Blake Fiedler, into her flesh; or a dazed Winehouse lurching around Fiedler’s apartment and bumping into walls while he, equally intoxicated, films her; or the singer going mute and nearly zombie-like at a Belgrade concert and, when roundly booed by thousands, turning and giving the audience a ghastly, pleading smile. None of these scenes exudes even a hint of chic.

Amy is very much an assembled documentary, a product of the editing room, where Kapadia stitched together footage garnered from iPhones, news clips, TV excerpts, and stuff shot on the streets by amateurs and pros. This isn’t a “talking heads” documentary, where newly filmed interviews comment on past events seen in old footage. To be sure, Kapadia did conduct fresh interviews with Winehouse’s friends, lovers, and colleagues, but most of their commentary is heard in voiceover rather than seen. It is the old footage that determines the shape of the narrative—what gets discussed and emphasized and what doesn’t. And since there’s little footage of Winehouse’s childhood and early career, while the later scandals were covered ravenously, Kapadia’s film, though fascinating, is also unbalanced. After all, Amy Winehouse lived for twenty-seven years, but more than three-quarters of this two-hour-plus documentary deals exclusively with her rapid decline.

But what we do see of the early life is poignant. In a home movie there’s a robust, happy fifteen-year-old Amy singing “Happy Birthday” at a party, and her voice, at first childishly raucous, expands and brightens as she gets into it. A record company executive remembers the young Winehouse as a “classic North London Jewish girl.” Her amazingly large, hungry eyes, which will later be garishly outlined with heavy mascara, look at the camera with the voracity of a child quite certain she could eat all the birthday cake without any help. We hear brief accounts of her troubled home life: her father Mitch’s adultery and departure, her mother’s inability to restrain her daughter’s willfulness. The mother remembers that when Amy was just a little girl she complained, “You should be tougher, Mum.” But this telling early material is over much too quickly.

Next we encounter the up-and-coming nineteen-year-old who still has the robustness of a child but also the sexy luster of a young talent who’s just realized there’s a world out there that wants to listen to her. She also soon realizes that being discovered by the music industry can lead either to the deepening of one’s gifts or to the slick commercialization of them. “Leave me alone,” she apostrophizes the wheeler-dealers and publicists, “and I will do the music.” The problem was she hadn’t yet realized what she’d become capable of when she wasn’t doing the music and had unlimited access to drugs and alcohol.

We all get to watch her make that unhappy discovery. Kapadia treats us to a ninety-minute barrage of news clips and TV and Internet footage showing each stage of the singer’s physical and emotional downfall. Though Kapadia has said he would like his film to free the singer from her tabloid legacy, his choice to rely so much on this late footage results in a movie that actually highlights Winehouse’s tabloid legacy. But this probably was inevitable, since coverage of the singer proliferated precisely when her career began to go awry.

If Amy doesn’t exactly rescue Winehouse, it certainly indicts the way in which mass media has changed for the worse. As the director said in his radio interview with Terry Gross on NPR’s Fresh Air, “‘Rehab’...was famous in the U.K. when all the newspapers went digital. So suddenly there were websites... Facebook, YouTube, all of these other social-media things suddenly turned up.... [When] she had a bad concert, everyone saw it around the world.... There was just this machine around Amy where it became about them and not about her, and she was the one that was getting more and more lost.” Precisely. But that same machine generated the coverage that gives this film most of its visual material.

And thereby hangs a happy paradox. The footage that the tabloids and websites once used to exploit the Winehouse miseries have been carefully sequenced by Karpadia and his editor Chris King so that they now bring her humanity home to the viewer. Seeing Winehouse drunk in an isolated YouTube clip is one thing, but seeing the same clip in the context of Kapadia’s narrative with the off-screen voices of friends and collaborators explaining the circumstances is something quite different. There’s no denying that we are watching a trainwreck in progress but the tragedy never reduces Winehouse to being a mere freak or spectacle. The image of her as the “classic North London Jewish girl” survives all the ensuing successes, survives all the wrong men and wrong choices. And of course Winehouse survives in her recordings. The way she imaginatively presents herself in her songs confirms in a controlled way what the camera catches raw: a young woman who, when she wasn’t at work, seemed completely unable to erect a deflecting persona that would help her deal with a devouring media—no clever patter or snide comebacks, no ready self-promotion. Her huge gray-green eyes express what we hear in her voice as she wails the word “black” through the concluding bars of “Back to Black,” the title song on her best album. It’s the wail of a child who loses her mother in a crowd and finds herself surrounded by strangers, all of them armed with cameras.