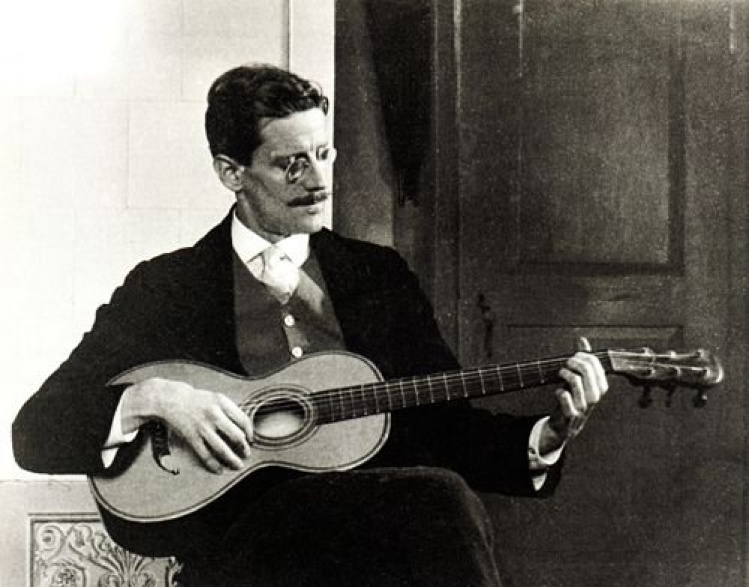 Ezra Pound was a champion rabble-rouser—a man whose career proves that, at least in literary quarrels, the key to winning is often to speak more loudly, and with more confidence, than one’s opponents. Given his zest for polemical overstatement, we shouldn’t be surprised to learn that, in 1922, Pound publicly declared the end of the Christian era. With the publication of James Joyce’s Ulysses, Pound said, Christianity had reached a terminal point. What would replace Christianity, he couldn’t be sure of; but that it was over and done he had no doubt. At the time, Pound was editor of the Little Review, and he helped introduce a new calendar to the magazine’s pages, replacing “1922” with “Year 1 p.s.U.”—meaning, “Year 1 post scriptum Ulysses.”

For a long time, most literary critics tended to write as if Pound’s calendar had stuck. In the view of such critics, modernists saw that God was dead and their work was in large part a reaction to his passing: art replaced religion, and the author became, according to Stephen Dedalus in A Portrait of the Artist as a Young Man, “like the God of creation”: “within or beyond or above his handiwork, invisible, refined out of existence, paring his fingernails.”

But things have begun to change. In recent years, scholars have pointed out just how crucial Christianity and its traditions remained to the modernist achievement—to believers like Eliot, certainly, but also atheists like Virginia Woolf. Stephen Sicari’s new book, Modernist Humanism and the Men of 1914: Joyce, Lewis, Pound, and Eliot, is very much in this revisionist spirit.

Sicari’s argument is basically twofold. First, he claims that literary modernists like Wyndham Lewis and T. S. Eliot offered a withering critique of modern rationalism, displaying a “radical skepticism” toward disembodied reason and drawing attention to the role that it played in the horrors of imperialism and capitalism. Second, he claims that this skepticism was only a prelude to a broader affirmation, “a concentrated effort to discover a permanent basis for an understanding of humanity and humanism.” In other words, after the modernists had cleared away the dead wood of the Enlightenment project, they looked for a new way to ground belief in humanity’s inherent dignity. Sicari argues that they found this new way in a “supernatural framework”—more specifically, in a traditionally Christian framework and its sacramental vision of creation. Modernists have been characterized as anti-humanist and anti-Christian; Sicari wants to argue that they were, in fact, Christian humanists through and through.

Plato serves as the book’s bête noire. Sicari sees him as the initiator of a long philosophical and religious tradition in which “the body is an evil to be overcome by the philosopher in the pursuit of truth,” a tradition that leads directly to Descartes and his later rationalist heirs. (I won’t go into the details, but it seems to me that Sicari is more than a bit unfair to Plato.) For Sicari, Christianity radically overturned this Platonic, anti-materialist philosophy, with the Incarnation showing once and for all that matter was not to be “rejected” but “perfected.”

Sicari argues that literary modernism likewise focused on humanity’s embodied nature, emphasizing that we are not pure minds but minds plus bodies. Modernist humanists like Eliot and Joyce, Sicari writes, “did not seek the self in logic or in rationality but in feeling.” They thought that “love [was] the only legitimate basis for a renewed humanism,” and that the richest, most convincing account of love and its relation to material embodiment remained the story of the Incarnation.

Parts of Sicari’s argument are more convincing than others. His chapter on Eliot, for instance, argues powerfully that Four Quartets, which is so often read as one long, static work, actually exhibits narrative development: “No matter how the poem was conceived in Eliot’s mind, the manner of its presentation suggests the problem of time comes first, the poetic handling of lyric moments second, and only finally a move toward ‘dogma’ as the resolution.”

Sicari’s chapter on Joyce is less convincing. Surely he’s right to point to Joyce’s embrace of the creaturely and to argue that, if transcendence exists for Joyce, it must come through the flesh and not in an escape from it. But this is a very different claim from some others that Sicari makes: he argues that Joyce is “a Christian humanist,” for instance, and that “Ulysses has as one of its highest goals the reintroduction of Christian values into a culture that ironically considers itself Christian. It seeks to rescue Christ from a church that bears little resemblance to Christ.”

It matters that Joyce didn’t believe in the Incarnation—or in other important truth-claims of Christianity. Yes, he borrowed tropes from the Christian tradition. But can a humanism be described as Christian when it doesn’t believe in the birth, death, and resurrection of Christ? Can we really say that Joyce’s “ultimate aim was to bring Christ into his book,” or that Leo-pold Bloom is, at heart, “an emblem of Christian love and mercy”? This Christian framework is just one lens through which Joyce sees Bloom, and arguably not the most important: he’s also a Jew and an archetypal Everyman and a modern-day Odysseus. Sicari doesn’t ignore these other frameworks; he just puts too much pressure on the Christian reading of Bloom.

At one point Sicari says that, while some might argue that Joyce “merely used an analogy to Christian doctrine” in his work, others “wish to see in this analogy to Christian doctrine something more literal and concrete.” He doesn’t say which side he comes down on, and even claims that it doesn’t really matter: “Either way, Joyce’s Ulysses is the epitome of the modernist humanism I am advancing.” But “either way” isn’t good enough: either Joyce believes in the Incarnation or he doesn’t. And the fact that he doesn’t has to affect our reading of his humanism.

Despite these problems, Modernist Humanism and the Men of 1914 is a rewarding read, even if you find yourself disagreeing with some of its strongest claims. Sicari offers a helpful reminder that modernism’s lack of interest in things divine has been vastly overstated, and that “modernism” and “modernity” are two very different things.