‘Treat the Alien the Same’ 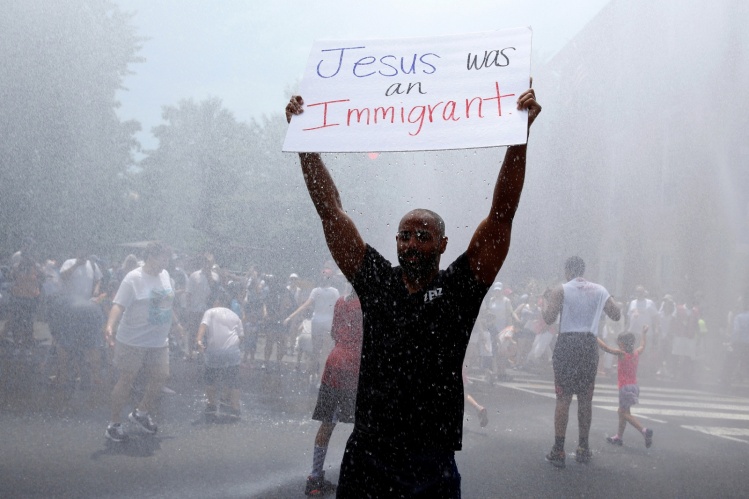 Opponents of Pope Francis pushed back at him in March after his apostolic exhortation Gaudete et exsultate declared that immigrants, the elderly, the poor, and the abandoned should be seen as “equally sacred” to the innocent unborn. With this comment, Francis upended a divisive political strategy used to appeal to the Catholic right in the United States:

This renewed a longstanding debate among Catholics on how to prioritize campaign issues in light of church teaching, with Francis’s critics maintaining that ending abortion has the highest priority. Their reasoning is that abortion is an intrinsic evil that violates the Fifth Commandment, while immigration is no more than a prudential matter.

This debate seems largely beside the point for me after reading the Biblical scholar Richard Elliott Friedman’s engaging book The Exodus: How It Happened and Why It Matters, recently issued in paperback. In the course of offering a historical account of the exodus, Friedman makes a compelling argument that love of the alien is the beating heart of the Hebrew Bible, the font of a revolutionary ethic: “Love your neighbor as yourself” (Leviticus 19:18). One takeaway from his book is that compassion for the migrant is not some secondary concern in Biblical tradition. It’s foundational.

It was not his intent, but Friedman’s research is a useful contribution to the ongoing debate over what the Bible means for immigration policy. The importance of this debate was highlighted in June when Attorney General Jeff Sessions cited Paul’s Letter to the Romans in response to church leaders who had criticized his “zero tolerance” policy for arresting undocumented aliens at the border. “Persons who violate the law of our nation are subject to prosecution,” he said. “I would cite you to the Apostle Paul and his clear and wise command in Romans 13, to obey the laws of the government because God has ordained them for the purpose of order.”

In a telephone interview, Friedman told me he was not trying to make a political statement about immigration in his book. “I deliberately did not refer to that in the book,” he said. “When I was writing the book, it was prior to the election where this became a big issue in the United States…. I really wasn’t going for anything political. I guess by definition it has implications.”

Friedman’s key finding is that there was indeed an exodus from Egypt, although not in the way the Torah explains it—with some 2 million people traveling across the desert. Archaeologists have found no evidence for such a mass movement, leading many to conclude it didn’t happen.

According to Friedman, Ann and Jay Davis Professor of Jewish Studies at the University of Georgia, there was in fact an exodus, but only the Levite tribe made the journey; the other tribes were in Israel all along. He says this is reflected in the fact that only Levites, such as Moses, have Egyptian names. But more so, it is seen in the way God revealed God’s name to Moses as Yahweh. The tribes in Israel worshiped El, or Elohim, a name that Friedman says is simply a generic term for a god. When the Levites arrived from Egypt, the decision was reached that the two gods were One—with God’s name revealed to Moses as Yahweh—and the landed Israeli tribes accepted the Levites as a tribe of priests and teachers. The Levite exodus became all Israel’s story.

I will not go through the many strands of the historic, literary, linguistic, and genetic evidence in Friedman’s analysis; mostly, he probes Torah sources that he says derive from the Levites—identified by scholars with the initials E, P, and D— to reach his conclusion that the origin of monotheism is revealed in the exodus story.

Those who have read Friedman’s popular 1987 book Who Wrote the Bible? will recall that he does some deft detective work in his analysis of these biblical sources and a fourth, identified by the initial J. In this book, he hones in on how the exodus unfolds by comparing the Levite sources with the non-Levite J source.

He notes that only the Levite sources have laws that prohibit mistreating slaves, for example. Why? “You shall remember that you were a slave in the land of Egypt, and Yahweh, your God, redeemed you” (Deuteronomy 15:15). Friedman says such reminders are repeated constantly in the three Levite sources, but are unmentioned in the J source.

“Over and over—fifty-two times!—all three Levite sources command that one must never mistreat an alien,” he writes. Why? “Because you were aliens in Egypt” (Exodus 22:20; Exodus 23:9; Leviticus 19:33–34; Deuteronomy 10:19). Friedman adds: “All three Levite sources of the Torah…command fair treatment of aliens. Just, equal treatment of aliens. Foreigners. Outsiders. Not members of the group.” This is not found anywhere else in ancient Near Eastern law, he says. Important ethical consequences followed from this compassion for aliens: the injunction to “love your neighbor” means to love everyone, a command rooted in the Levites’ migratory experience.

The injunction to ‘love your neighbor’ means to love everyone, a command rooted in the Levites’ migratory experience
sharetweet

Friedman opposes the idea that the reference to a “neighbor” means only to love other Jews, a point he says that the atheist Richard Dawkins raised in his book The God Delusion. “When he denigrates the Bible and the Jews by saying that one of their very greatest gifts—“love your neighbor as yourself”—was no gift but a piece of ethnic superiority, then it is my job as a Bible scholar to set the record straight,” he writes.

Scholars have many different opinions on what “love your neighbor” means within the Hebrew Bible—many would limit it to the Israelite community. Friedman challenges this by analyzing how the Hebrew word for neighbor, rē`a, is used in the Hebrew Bible. It refers variously to everyone (Genesis 11:3); a Canaanite (Genesis 38:12, 20) and Egyptians (Exodus 11:2) in addition to fellow Hebrews (Exodus 2:13). When the Ten Commandments say not to covet your rē`a’s wife, Friedman asks “Do you think that this meant that it was okay to covet a Hittite’s wife—even though elsewhere the Bible condemns King David for doing just that?”

For Christians, Jesus definitively answers the question of “Who is my neighbor?” in the parable of the Good Samaritan: the true neighbor shows compassion for the broken traveler; your neighbor can be a despised outsider, a Samaritan. When I asked Friedman about that, he agreed, “speaking as a non-expert,” since he isn’t a New Testament scholar. “It would mean that the two Testaments are consistent on this point, at least,” he said. “You can imagine a lot of people haven’t seen it that way. They thought that Jesus was being revolutionary.… He was just affirming a very old principle.”

Friedman said he had set out seeking no more than to define how much, if any, of the Torah’s exodus account is historical. “But more and more,” he said, “it becomes about the origins of monotheism and love your neighbor.”

Both Pope Francis and St. John Paul II have cited the outcast Good Samaritan as a model of compassion for the immigrant, the battered person whom the Samaritan helps after a priest and Levite pass by. “The Lord will say to us: Do you remember that time on the road from Jerusalem to Jericho? That man who was half dead was me. Do you remember?” Francis said at an Angelus in St. Peter’s Square in 2016. “That hungry child was me. Do you remember? That immigrant who many wanted to drive away, that was me.”

Francis cited the parable in his 2013 visit to Lampedusa, the tiny Italian island that has become a symbol of migrant misery:

We have fallen into the hypocrisy of the priest and the Levite whom Jesus described in the parable of the Good Samaritan: we see our brother half dead on the side of the road, and perhaps we say to ourselves: "Poor soul…!", and then go on our way…. Indeed, it even leads to the globalization of indifference.

John Paul II saw immigrants as the contemporary equivalent of the traveler who fell victim to robbers on the road to Jericho. “For her part, the Church, like the Good Samaritan, feels it her duty to be close to the illegal immigrant and refugee, contemporary icon of the despoiled traveler, beaten and abandoned on side of the road to Jericho,” he said in his 1997 Message for World Migration Day.

When I spoke with Friedman, I told him I understood his decision not to delve into the current political implications of his research—academic historians are reluctant to do that because using a contemporary lens would distort the past. Still, he said that a better understanding of the exodus can clearly be meaningful. “It’s not that I’m shying away from present relevance at all,” he said.

We can marvel along with him as he writes:

Something extraordinary happened in ancient Israel. The writers of the Bible who came from the stock of those who had experienced the exodus bequeathed to us all something tremendous: Treat the alien the same. Love your neighbor as yourself. This piece of wisdom has reached us from a text written over two millennia ago.

This central Jewish and Christian ethic—rooted in the migrant experience—would seem to upstage the passage from Romans 13 that Attorney General Sessions cited: “Let every person be subordinate to the higher authorities, for there is no authority except from God, and those that exist have been established by God.”