Until All Are Welcome 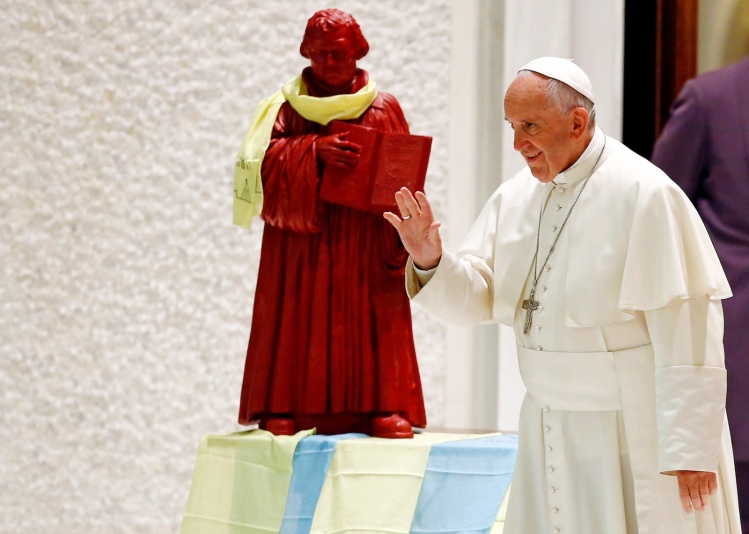 Pope Francis next to a statue of Martin Luther at an October audience for Catholics and Lutherans from Germany (CNS photo / Stefano Rellandini, Reuters)

In October a eucharistic minister at St. Nicholas Roman Catholic Church in Evanston, Illinois, crossed her arms over her chest to request a blessing rather than receive Communion. I was that minister, and my decision was a spur-of-the-moment response to the presence of a Lutheran pastor who had joined us in our very first commemoration of Reformation Sunday. If she could not receive the body and blood of Christ, neither would I.

The decision was spontaneous, but the thinking that led naturally to it was not. Since our marriage, my Evangelical Lutheran Church in America (ELCA) pastor husband and I have been on a thirty-five-year ecumenical journey that has yielded great richness—religious life in stereo, we like to call it—and much hope.

Some of the hopeful moments have included the covenant struck between the Metropolitan Chicago Synod and the Archdiocese of Chicago in 1989 and renewed with great pomp on this past October 31, the five-hundredth anniversary of the Reformation. Even more meaningful to us was the eighteen-month process of gathering with all the ELCA and Roman Catholic faith communities in Evanston to pray, discuss history and theology, bust myths, serve the community, partake in hymns and beer, and most importantly to create our own blueprint for ongoing collaboration, covenanted with the blessing of our bishops on Reformation Sunday.

Our ecumenical marriage has also contained many moments of pain. Some of them have come from the Lutheran side, as when my husband’s candidacy committee threatened not to approve him for ordination because they believed a Catholic wife could not adequately support a Lutheran pastor in his congregational work.

But the overwhelming majority have come from the Catholic side, and the overwhelming majority of these have to do with the Eucharist. Quite simply, Catholic teaching forbids us to receive the Eucharist together. And this particular pain surprised my husband and me by intensifying, rather than abating, during the crescendo of ecumenical progress and hopefulness that led up to Reformation Day, 2017.

ELCA Lutherans and Catholics agree that the Eucharist is a sacrament. We agree that it is both a remembrance and memorial of Jesus’s death and a moment of Christ’s Real Presence in bread and wine. Although the documents of agreement have not yet been edited to reflect this, Pope Francis himself has made clear that the Eucharist is food for sinners, not a reward for spiritual perfection, another important point of convergence with Lutheran eucharistic theology. Catholics and Lutherans alike insist that only a validly ordained member of the clergy may celebrate the Eucharist.

Lutherans recognize the apostolic character of Roman Catholic ministry, but Catholics do not so recognize Lutheran ministry.
sharetweet

The real disagreement is not over eucharistic theology but over that last point, valid ordination. As the USCCB and ELCA’s joint Declaration on the Way laments, “an important asymmetry remains: Lutherans recognize the apostolic character of Roman Catholic ministry, but Catholics do not so recognize Lutheran ministry.”

What this yields on the ground is an excruciating encounter of open hospitality on the Lutheran side with fundamental inhospitality on the Catholic side. Lutherans recognize the Catholic clergy as true celebrants of the sacrament, and they welcome Catholics to share in the sacrament in Lutheran churches. But in ordinary situations Catholics cannot recognize the legitimacy of Lutheran ordination or eucharistic celebration, must decline the Eucharist in Lutheran settings, and may not invite Lutherans to share in the Eucharist.

This fact makes ecumenical relations at the personal and congregational level painful enough. But shoulder shrugging on the Catholic side, intended to express frustration and regret, only makes matters worse: “I’m sorry, there’s nothing I can do, we’re not allowed to inter-commune yet.” Such a response may calm Catholic discomfort, but it does nothing to prevent the ongoing wounds Lutherans suffer whenever they come together with Catholics in ecumenical good will.

What can we do instead? From Conflict to Communion, the report by the Lutheran-Roman Catholic Commission on Unity, insists that Catholics too embrace the priesthood of all believers in Christ. What can we do with this? In the long term, Catholic clergy and theologians need to rededicate ourselves to aligning our convergent theology with our divergent ecclesiologies, working the kinks out of theology and practice. But in the short term, lay Catholics can impose a discipline of penance and regret on ourselves, in public lament of our own church’s failure to work out ways of sharing a sacrament on whose nature and meaning we agree.

The decision to forgo Eucharist on Reformation Sunday was easy for me because I’ve already begun fasting publicly from it during our church’s two seasons of penance and preparation. During Advent and Lent I attend Mass. I serve as a eucharistic minister. And I continue in my role as sacristan. But in solidarity with my Lutheran brothers and sisters in Christ, I do not receive the Eucharist.

Eucharistic theology and the priesthood of all believers are two of the most important agreements arising out of the past five decades of Lutheran-Catholic ecumenical dialogue. Your response to Eucharist and priesthood may take a different shape than mine. To be sure, one-by-one changes to the sensus fidelium won’t produce instant results. But no major change at the top can be successful that isn’t preceded by a significant, visible shift among the laity.

Be part of that shift: exercise your priesthood in support of a eucharistic table where all are welcome.

Cristina L. H. Traina is chair of the Department of Religious Studies at Northwestern University.