Route 66 (and a Former Self) Revisited 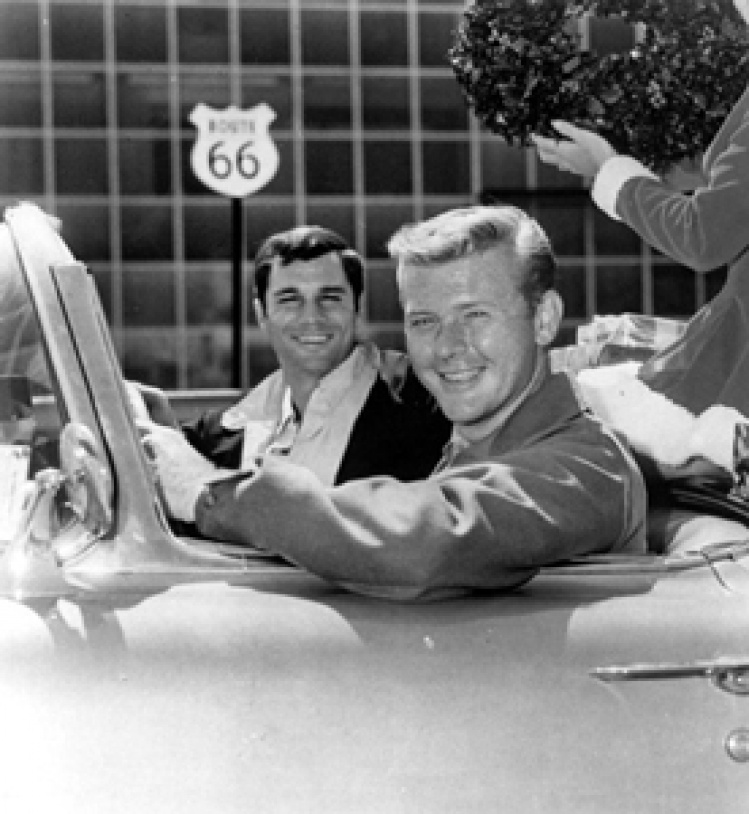 Recovering TV addicts have no business pining after those shows that got them hooked in the first place.

Yet for more years than I care to admit, I would periodically burden my long-suffering wife with my memories of one series in particular: Route 66, which debuted in 1960. She’d listen patiently and nod as I waxed rhapsodic about the “breakthrough” program. Then one day recently, out of an abundance of love and understanding (and perhaps to test the efficacy of aversion therapy), she presented me with the complete DVD set of the show’s first two seasons.

Created by Academy Award winner, Stirling Silliphant, and producer Herbert B. Leonard, the show followed the lives of Tod Stiles (Martin Milner) and Buzz Murdoch (George Maharis) as they traveled the country in a Corvette convertible in search of themselves and a rapidly evolving social and political landscape.

Buzz and Tod were a study in contrasts and had interesting back-stories. Raised in New York’s Hell’s Kitchen, Buzz worked for a Hudson River barge business owned by Tod’s father. Tod was Yale student who worked summers on the barges. When his father died after Tod’s junior year, leaving his son a pile of unpaid debts and the Corvette, Tod was forced to leave school. Their worlds upended by the failure of the business, the book-smart Tod and the street-smart Buzz decided to hit the road and “catch a star,” in Buzz’s words.

What they discovered about the country they traveled around and the lives of those they encountered along the way made for compelling watching.

The series was groundbreaking in so many ways. The hour-long episodes were filmed almost entirely on location throughout the U.S. The episodes tackled difficult issues head-on: racism, xenophobia, drug addiction, mental illness, nuclear annihilation, neo-Nazism. Heady stuff for a young teenager with intellectual pretentions (and, alas, pop-culture sensibilities).

The scripts, a great many of them written by Silliphant, were literate and populated by memorable characters who were brought to life by an interesting mix of actors. Some were at the end of successful careers: Ethel Waters (who was nominated for an Emmy for her role, the first African-American woman so honored), Lew Ayers, Akim Tamiroff, Everett Stone, Regis Toomey, Douglas Fairbanks, Jr. Some were virtual unknowns who would go on to stardom: Robert Redford (who had auditioned for the Tod Stiles role), Robert Duvall, Martin Sheen, James Caan, Ed Asner, Leslie Nielsen, George Kennedy, Keir Dullea. And others were in the prime of their careers: Lee Marvin, Susan Pleshette, Jack Warden, Anne Francis, Peter Graves, Tuesday Weld, Nehemiah Persoff, Nina Foch.

So, there I was, boxes in hand, a bit giddy at the prospect of binging on all 64 episodes. After tearing off the shrink-wrap, I cued up Disc 1 and invited my wife to sit with me to watch the first episode. She dutifully complied, but at the conclusion of the show (about a small backwater town in Mississippi with a dark secret) she politely excused herself. I expected as much given the amount of squirming she did during the show's last half-hour.

Although I sat still for the entire 51-minute running time (the commercials were excised), I wasn’t enthralled. In fact, by the time Nelson Riddle's hypnotic score began to play over the closing credits, I felt somewhat hollow. And that feeling, along with an embarrassed self-consciousness, continued through the remaining 63 episodes. The story lines were as topical and hard-hitting as I had remembered, but too many of the treatments now seemed ham-fisted and didactic. The guest stars all turned in credible performances, but many of their characters, along with those of the two leads, exuded an earnestness that my former self thought noble, but my present self found naive.

Truth be told, it was I who was really naive. Going in I knew full well what to expect of '60s-era drama, even the "breakthrough" ones. The U.S. was transitioning from the post-war era to the New Frontier. Issues that incubated during the Eisenhower years emerged fully formed in the early '60s, affecting all levels of society. Bravo Stirling Silliphant for taking on those issues in the spirit of the times. And shame on me for not using that historical lens when evaluating the show’s scripts and performances and production values and the tastes and conceits of a certain Catholic school ninth grader.

For those considering a trip through the TV or cinematic past to re-create a fondly remembered time or experience, be forewarned: nostalgia ain't what it used to be and a former self deserves loads of empathy. And don’t forget the popcorn.

Staff Picks: 'All the Light We Cannot See'