'The Rich Countries Must Show Mercy' 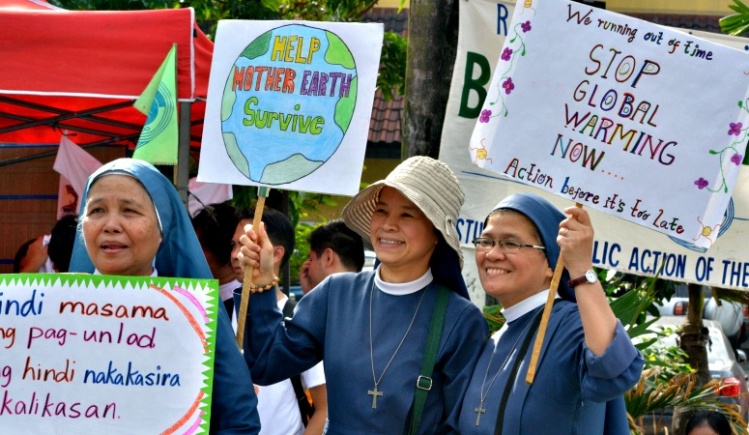 The Paris Agreement of December 2015 was the first accord to commit every country in the world to combating climate change. Nearly two hundred nations agreed to implement measures that would limit the rise in global temperatures to 1.5 degrees Celsius and establish a fundraising goal of $100 billion a year to help poor countries adapt to the effects of climate change and reduce their emissions.

Both of these were main agenda items of the Climate Vulnerable Forum, a group of forty-three developing nations particularly at risk to the effects of a changing climate. The forum is chaired by the Philippines, which in a typical year is battered by more than twenty tropical storms. Emmanuel M. de Guzman, head of the Philippine delegation, said at the close of the Paris conference that for his country, climate change “means sorrowful catalogues of casualty and fatality, the countless voices of the homeless and the grieving—their very tears and screams carried to us by the winds and the waves that blow their homes away.”

It was not the first time a representative of the Philippines made an impassioned presentation on behalf of his people. At the 2013 climate conference in Warsaw—which opened just three days after 6,300 people lost their lives during Typhoon Haiyan, the deadliest storm in Philippine history—Nadarev “Yeb” Saño spoke tearfully of the situation back home, where his brother was collecting bodies. “What my country is going through as a result of this extreme climate event is madness,” he told the gathered. “The climate crisis is madness.” To emphasize the severity of the threat that climate change poses for the Philippines, Saño declared a hunger strike for the duration of the conference.

No one can say that any particular extreme weather event is caused by climate change. But most climate scientists agree that global warming compounds the strength and severity, and thus the resulting damages, of dangerous meteorological occurrences. From fires in the American west to the flooding of island nations, such events are likely to become more frequent and to worsen over time as the planet continues to warm.

But the Philippines is especially at risk. The exposed archipelago has no natural protection from the typhoons spawned in the warm waters of the eastern Pacific Ocean, and it suffers more tropical storms per year than any other nation. A typhoon in January 2014 killed seventy people, and in July of that year another storm took more lives. Still another typhoon in November caused $114 million in damage. In October 2015, Typhoon Koppu killed more than fifty Filipinos and displaced half a million more, while last December’s Typhoon Melor destroyed 100,000 homes and killed dozens.

Typhoon Haiyan dwarfed all of these, making landfall in the early morning of November 8, 2013, with winds of 195 miles per hour and producing a massive storm surge that swept over the densely populated coastal towns of Tacloban City and Palo. About 48,000 people lived in Palo at the time; more than 1,000 were killed. Today, mass-grave memorials are as common in Palo as public squares or parks are in other towns.

Andres Ian R. Sevilla is the locally elected “captain” of his Palo barangay (neighborhood), and within two days of the storm, he set to work, calling a meeting for all 800 of its residents in a nearby university building—one of the few structures left standing. It was up to him to help members of his community recover. He assigned people to security details, to look for food to share with one another, to clean up debris, to build makeshift shelters. “Sharing,” Sevilla said, “was the key to survival. We convened the community to unite, in order to survive.”

The first aid agency to reach the neighborhood was Catholic Relief Services (CRS), which arrived four days after the storm. It not only helped in rebuilding Sevilla’s barangay; today it continues to lead Disaster Risk Reduction (DRR) efforts in the community through workshops and training. DRR is a UN-defined approach to reducing the damage caused by natural hazards like earthquakes, floods, droughts, and cyclones, and is a critical element of CRS programs in the Philippines and around the world.

Sevilla says that if another typhoon hits, DRR will play a crucial role. An estimated 60 percent of the Filipino population lives in coastal zones, in communities of informal settlements on government-owned land. Many of these make up the 20 percent of the nation’s population living in extreme poverty (less than $1.25 a day); they either depend on proximity to water for their livelihood or lack access to a legal living arrangement close enough to jobs, hospitals, schools, and other services. A law makes dwelling within 40 meters of a body of water illegal, but it is poorly enforced. With so many people potentially at risk, it is hoped that DRR training will aid in preparedness and evacuation, so that when the next storm comes, the toll won’t be as high. Though the Philippines’ poor have contributed the least to the nation’s climate-related crises, it is they who have lost the most, and who stand to lose still more if sufficient measures aren’t taken.

Meanwhile, the Philippine government’s Climate Change Commission, now headed by Guzman, is working on developing the country’s disaster response infrastructure, which when Haiyan hit was stretched thin by the seven tropical cyclones that had already struck that year. It will also focus on mitigation and adaptation to the effects of climate change. While the Paris agreement came as good news, many have also noted its shortcomings—such as the fact that emissions-reduction pledges fall well shy of limiting global temperature increases to 1.5 degrees Celsius. Based on current pledges, the planet is likely to warm by 2.7 degrees Celsius by 2100. By all accounts this is a catastrophic rise, especially for member nations of the Climate Vulnerable Forum.

Guzman himself acknowledged the shortcomings, but also emphasized the need to build on what the accord accomplished. “Our Paris agreement may not be perfect, but it is essentially acceptable,” he said. “Now we must focus on its implementation and work on its compliance procedures.”

As for Sevilla, he continues to work with Catholic Relief Services on educating his community in DRR strategies. The barangay has mapped out evacuation centers to serve all of the neighborhood’s residents. They will designate one leader for every ten households who will be responsible for making sure each has received an evacuation warning in the event of a disaster. These leaders will receive their own trainings so that they can help individual families develop their own household preparedness plans.

“Ah, climate change,” he says, when asked his thoughts on the warming of the planet, and on what it might mean for his barangay and the Philippines in general. “People must be educated so our climate will not be hotter in the next generation.” Had he been in Paris in December, what might he have said in a speech to delegates from around the world? He grows serious and thinks for a minute. “I would have said that the rich countries must show mercy to the poor countries. They must consider the Philippines if they cannot control this climate change. If another Typhoon Haiyan struck, I don’t know if we could handle it.”

Joanna Gardner handles communications for Catholic Charities, Diocese of Camden, and writes for the Diocesan newspaper, The Catholic Star Herald.