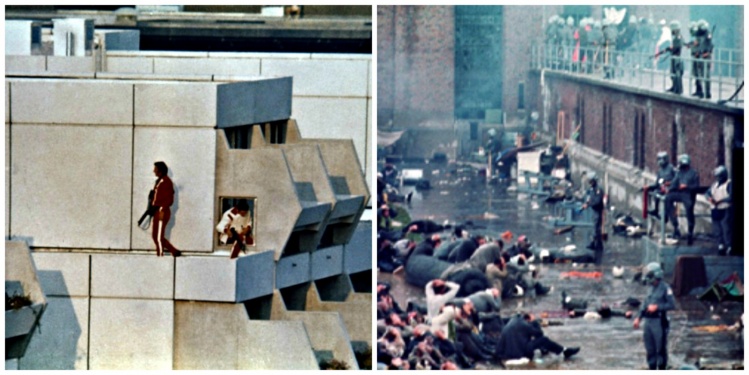 It was fitting, ironic, and tragic that the Munich murders and their equally brutal aftermath should occur so close to the first anniversary of Attica. The events had several things in common. Ironically, the very concept of seizing hostages presumes a humanistic value system on the part of the larger society. Their captors are usually alienated, desperate men, outlaws who themselves mock law and scorn moral values, yet risk their lives in the gamble that the "civilized" community has too much respect for individual lives to allow its captured citizens to be slaughtered by fanatics. So, irrational men challenge rational men with the "good" man's dilemma: does he compromise the order of the state and thereby risk the consequences of possibly unlimited future disorders for the immediate safety of a few individual captives, or does he watch the captives die for the cause of supposed order? It is a cruel fate that moral sensitivity on the part of the state—as personified in its political leaders—should so put the community at the mercy of madmen. Yet, it is this very vulnerability—this fundamental insistence that lesser values such as property and national pride must be tempered for the sake of human freedom—that eventually separates civilization from barbarism, no matter how barbaric corrupted civilizations become.

To remember Attica is to remember how much the violence of the state, with its almost irrational passion for order, can exceed the violence of its desperate men. What values could the Governor of New York have weighed a year ago as, refusing even to visit the scene of the crisis, he sent his men in shooting? It is hard to resist the conclusion that in the eyes of the state the lives of prisoners—black, poor, nameless and powerless—and even the lives of hostages, now barely distinguishable from their captors, prisoners of the same system that oppressed them both, were worth less than the assurance that the impatient state had resolved its dilemma. And even when it became clear that the zealous rescuers had shot the hostages dead, the Governor had no regrets. After all, even before the corpses were tagged and examined the President of the United States had hurried to congratulate him.

Like the blacks in Attica, the prisoners of Munich belonged to a people that has borne violence and persecution for generations. Unlike the prisoners of Attica they were not violent rebels, nor the off-serapings of their society. They were an elite. Yet because of what they represented and because of what the Olympic Games have become they were caught up in and destroyed by the games nations play—victims of fanaticism, irrational hate, and perhaps the impatience of the state to be free of its dilemma.

From one point of view it seemed doubly tragic that this act of terrorism took place in the context of the "spirit of the Olympics." The games have been described as civilized man's oldest experiment in brotherhood, a human hymn to the beauty of the body—lithe, well-muscled young men, graceful, spectacular women (like the Russian gymnasts), the finest products of their races and nations, testing the limits of physical and spiritual ambition, competing for personal pride and national honor, all with the sponsored expectation that the controlled and honored struggle of the best young bodies would lead to a higher union of the spirit. Sometimes those moments of brotherhood were the boxers who pummeled one another for three rounds could hug one another after the final bell.

Yet, once the games have taken on an ideology of their own, as the ritual of a secular religion or as the vehicle of nationalistic hopes, it is understandable that they could end in violence and discord. Sports can never transcend politics. Man is political by necessity and athletic only by choice. In Mexico City four years ago students were shot down in the streets, while Olympic athletes a few miles away psyched themselves up to win their medals. And at both games the clenched fists and slouched postures of blacks on the winners' stand have brought on the umbrage of the Olympian elders.

All over the world men are dying violently and irrationally at one another's hands. Eleven die in the midst of an internationally televised ritual of sports and the world pauses to mourn; but the unhappy fact is that most nations are more committed to terror than they are to sports as a means of resolving their differences. That is why bombs and snipers kill innocent people daily in Belfast; why American bombs can obliterate Vietnam villages, pushing Asian people out of life as if they were sacrificial pawns on a chess board; why Israel has unleashed its reprisal air raids—a bizarre and bloody tribute to its slaughtered weightlifters and wrestlers.

Rasmilla Hamse was an Arab mother in Rafid, Lebanon. Now she and her seven children are dead. Bombed. The world will not mourn. Nor will their deaths bring David Berger back. The so-called civilized world still does not respect life enough to reconsider its current methods of solving its problems. Appropriately, the National Conference of Catholics Bishops has dedicated the first week in October as "Respect Life Week....to consider some of the contemporary threats to human dignity—abortion, war, violence, hunger and poverty." But its handsome handbook on the issues has not one word on prison reform, not a word on terrorism. Nor does the word "Vietnam" ever appear.

Why Are We There?