Half-way through Peter Mathiessen’s final novel, In Paradise, the chief character, Olin, tells what he says is an alternate version of the crucifixion story to Catherine, a young novice soon to take her religious vows. The good thief makes his request that Jesus take him to Paradise. Jesus responds, not by saying “Thou shalt be with me this day in Paradise,” but rather, “No, friend, we are in Paradise right now ”

The virtual blasphemy points at the crucial conflict of the novel, called of course In Paradise: overwhelming bleakness of death and yet redemptive transcendence. The physical “paradise” is the Auschwitz Concentration camp. The plot involves a retreat of one hundred participants fifty years after the liberation of the camps. The intent of the retreat is to allow those involved to come to terms with the death camp: they are survivors, bystanders, family members of those killed and of those who killed, some are local residents; but the majority come from many nations and represent different faiths.

There is a thwarted love story between Olin and Catherine as part of the plot, but it is pursued only within the menace of memory, the physical intimidation of the camp buildings and ruins as they inevitably force those who are on retreat to face “All Creation right here now.” It is the frightening inappropriateness of the developing affection of Olin and Catherine, one that they both register, that adds to the profound unease evoked by the narrative.

How does a writer “complicate” the Holocaust? Mathiessen’s artful, in the best sense, recourse is to allow his characters to keep vigil in the winter cold of the camp’s induction ramp, and then meet in the evening to offer personal testimonies and reactions to the others. Far from being a somber penitential exercise, we encounter an inevitably human response – anger, shame, vitriol, outraged proprietary claims, and deep irresolution.

Who owns the memory of the holocaust? How crassly commodified that phrasing sounds, but in a sense it is appropriation of the guilt, the accusation, the complicity and the pity that Mathiessen bravely dissects. And the writing is like a scalpel, cutting against easy prepossessions and facile emotion.
His characters are merciless in indictment of the Church, especially of the Polish wartime Church. The novice Catherine risks her vocation not in a secular love affair but in her public expression of sorrow over the complicity of her Church and countrymen in the Shoah.

There are no easy moments in Olin’s consciousness. He is pitilessly self-aware, self-reviling even as he seeks out Catherine against his better judgment. Her extraordinary maturity mirrors the waywardness of his passion, humiliating him in a place where passion rose with the smoke of the ovens.

This is a novel that will not relent and offers no easy resolution to what the Death Camps mean. One cannot simply rest with the banality of evil, or retreat to the incomprehension of monster executioners. In Paradise is where we stand, naked as Adam and Eve. 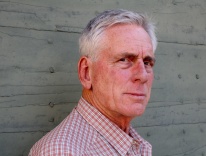