The Museum of Biblical Art
By Maurice Timothy Reidy
Arts

I admire religious art, but like most people my ideas about what makes art religious are pretty conventional. I love Fra Angelico and El Greco, but until recently I would be hard pressed to name an artist who tackles religious subjects who is not dead.

My recent visits to the Museum of Biblical Art (MOBIA) have changed that. MOBIA, which opened last May in Manhattan, currently features an exhibition of contemporary painters, sculptors, and mixed-media artists specializing in religious themes. Some of the work is strange, some downright weird, but much of it pushes the boundaries of religious art in arresting ways.

Debunking myths about religious art is part of the mission of MOBIA, which is housed on the second floor of the American Bible Society near Lincoln Center. Ena Heller, the executive director of the museum, told me that she hopes the gallery will surprise people in the same way it surprised me. “We art historians have been taught that religious art pretty much died with the Enlightenment,” said Heller, who ran the Bible Society’s art gallery before founding MOBIA. “That’s one of the notions we’re trying to...dispel—or at least discuss.”

Heller’s definition of biblical art is expansive. She says MOBIA will naturally include work that represents figures or stories from the Bible, but will more broadly, according to its mission statement, feature work “inspired by the Bible and its legacy through the centuries.”

“The Next Generation: Contemporary Expressions of Faith,” on display through November 13, shows where biblical inspiration can take the modern artist. On my initial visit many of the pieces struck me as only obliquely religious. What’s religious (let alone biblical) about a still life of a water faucet? According to the explanatory note written by the artist, the piece demonstrates how “there is beauty in the places where people do not tend to look. What beauty is apart from God?”

True, but not very persuasive, I thought. It was also true that I found myself relying heavily on the artists’ written explanations of their work, usually a bad sign. But not always. Consider Ellie Murphy’s “In the beginning was the Word...”—a piece which quite impressed me. The mobile-like construction is made up of three wooden bars hanging from the ceiling, forming a zigzag pattern. Dangling from each bar is a series of strings with ones and zeroes made of clay. The explanatory card alerts us to the fact that ones and zeroes are binary code—the language used to program computers—for the first verse of the Gospel of John. The piece reminded me of illuminated manuscripts, which were inspired by the belief that because the “Word was God,” words themselves were things of beauty, deserving of artistic celebration. Murphy’s artistic vision celebrates that insight.

Similarly provocative was Anita Breitenberg Naylor’s Revelation 3:5 (a photograph of which was featured on the cover the October 21 Commonweal), a painting that combines Christian and Hindu imagery. Revelation 3:5 resembles a kaleidescope or a mandala and features images of Jesus in the spaces usually reserved for Hindu figures. Naylor has jokingly described her piece as a “sneak attack”—a way to smuggle Christian images into a painting that otherwise evokes the Eastern tradition. She is not the first to attempt such a subtle form of evangelization. The sixteenth-century Jesuit missionary Matteo Ricci used a Chinese character that resembled the Christian cross in the mnemonic system he taught to his Chinese followers.

A few of the pieces in the exhibit seemed mundane at first, but grew more intriguing on repeated examination. Guy Chase’s Untitled (Ledger for Multiple Adjustments) is a painting of an accountant’s ledger; close inspection reveals that each of the boxes within the grid is covered with layers of paint. Chase writes that the composition process was both “painstaking” and “meditative”—he drew the grid first, then slowly filled in the boxes. His words, and his choice of subject, pay tribute to the Benedictine maxim that work, however monotonous, can be a form of prayer.

Another piece, James Larson’s Stations of the Cross, seemed eerily prescient. Made up of fourteen panels, Stations is a surreal interpretation of Jesus’ Passion and death. The latter panels show the Jesus figure being engulfed by water. Larson writes that he is interested in “water as a source of chaos and death,” an image that seems especially powerful in the aftermath of Hurricane Katrina.

Not all of the works are successful. One image of Jesus screened onto a Wheaties box—a statement about how consumerism has become a religion in this country—seemed trite. And even after several viewings, I retain my doubts about how much that picture of the faucet tells us about God.

“Next Generation” is the museum’s second exhibit. The first, “Coming Home! Self-Taught Artists, the Bible, and the American South,” featured the work of untrained artists from the South. I did not see that installation, but the catalogue is intriguing. One piece from the exhibit featured cartoonish images from the Bible painted on a pair of overalls. Another showed a picture of Elvis holding a portrait of Jesus, with a caption that read: “There is only one king.” Both struck me as clever hybrids of Southern culture and Christian piety, reminding us of how deep the roots of evangelical Protestantism are in the South.

MOBIA will mount about four exhibits a year. A show featuring a selection of ancient oil lamps will open December 2 and run through February 26. The exhibit is organized by the Bible Lands Museum in Jerusalem.

Making a success of a biblical art museum in New York City will be difficult. As a New York Times article about MOBIA suggested, “in most taxonomies of religion in America, the intersection of 61st Street and Broadway on the Upper West Side is not considered Bible country.” It is telling that when Heller became director of the Bible Society gallery, some of her colleagues wondered whether she’d feel restricted by the museum’s subject matter. “I thought [that] was a very funny question,” Heller told me. “Because when you think about the Metropolitan Museum of Art, what percentage of its collection has to do with the Bible? Relatively high.”

Heller hopes the museum can provide a “neutral ground” for discussion: “This is not about politics, this is not about belief; this is about educating the public about art that came out of this one particular book that is important for our civilization.”

Heller is careful to note that MOBIA is an artistic enterprise, not a religious one. There is therefore a tension between the goals of the museum and the designs of the artists. Much of the work on display in “Next Generation” seems informed by a deep faith. (Many of the artists belong to Christians in the Visual Arts, a trade group of sorts.) For example, the artist Robert P. Eustace describes his Image: Seed of Divine Life, a painting of Mary and child on metal and wood, as an attempt to “convey something of the mysterium tremendum, or a visual approximation of awe, divine, mystery, and terrible beauty.”

Until recently the only contemporary religious art I knew of were works that had drawn the ire of the Catholic League—pieces like Chris Ofili’s The Holy Virgin Mary (covered in elephant dung) or Andres Serrano’s Piss Christ. Both artists seemed to present religious images as trite objects to be toyed with rather than exceptionally fertile territory for exploration by the creative imagination. Happily, MOBIA gives hope that religious art is not an exhausted project.

Maurice Timothy Reidy is a former associate editor of Commonweal. 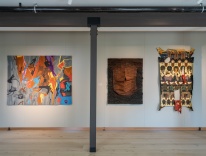