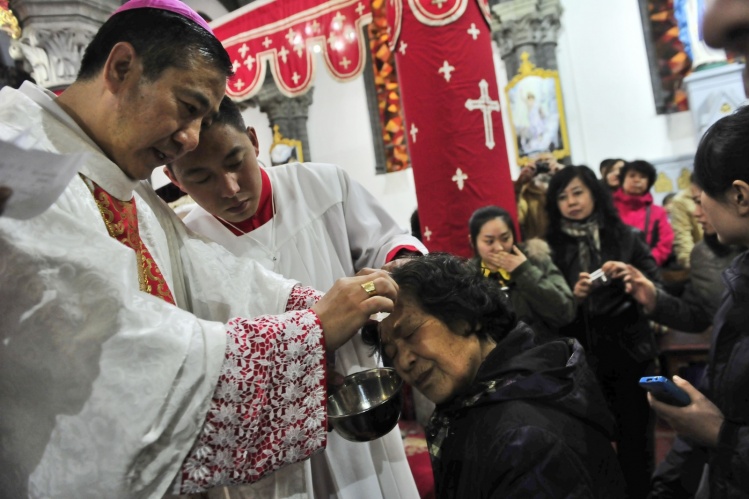 When we turned onto a dirt road leading into the village, our hearts filled with excitement. On the right, terraced cliffs of yellow loess were dotted with cave homes. Below us stretched a green carpet of young wheat and cabbage. Above every doorframe were pasted new paper couplets. Here, we felt, was everything we’d been looking for. Here at last, in China’s north-central Shaanxi Province six hundred miles from Beijing, was traditional China.

Our hosts, a couple we’d met selling paper lanterns in the town square of nearby Fengxiang, welcomed us into their courtyard home. In minutes they’d brought out bowls of homemade qishan mian, sour-hot noodles. Conversation was halting; we talked about why we’d come all the way out to central Shaanxi for Lunar New Year; we tried to explain that, living in Beijing, we wanted to see old China, the heart of its folkways, before it disappeared. China was urbanizing, and villages were emptying out across the country. They nodded. My wife mentioned my father was a Lutheran minister, a reliable way to spark interest in China. They nodded again. The silence lengthened. Suddenly, the little girl—silent till then—ran across the room.

“Our village has a church,” she said eagerly. “Do you want to see it?”

Surprised, we went outside and followed the girl down a narrow path. On either side were slumped brick buildings. Now close enough to read the paper couplets on the lintels and doors, we saw most had also a picture of Jesus on the cross.

“Is everyone here Catholic?”

Up a little slope stood a beautiful, if ramshackle, church, repaired lightly since it was built in the 1930s. The concrete walls were darkened and crumbling, but it was still in use. As soon as we entered the churchyard a woman appeared to unlock the door. Inside there were pews and paintings and hymnals with simplified music notation. At the front was a little drum set. It was nearly the size of my father’s church, which seemed huge in a town that had only a few hundred residents. The woman, however, looked embarrassed.

“You should go to the see church outside of town,” she said, handing us pamphlets. “That’s the big one.”

In our search for “old” China, I had never expected to find a Catholic church. But I should not have been surprised. The countryside is not only the bedrock of Chinese traditions, but also the bedrock of Chinese Catholicism. The majority of China’s one hundred and thirteen dioceses were founded around small, provincial cities. During the Maoist era, when churches were converted to factories or restaurants, rural Catholic families quietly kept the faith. In a tiny town in Yunnan, I once met a Tibetan Catholic whose family still made wine from the grapes planted by a missionary over a century ago.

The church’s deep roots in rural areas have long been a source of strength. But it is also increasingly a weakness as China races to urbanize, leaving such communities hollow shells. Outside the Lunar New Year holiday, the village we visited was full of the elderly and the schoolchildren they cared for while their parents worked in the cities. All the young people of working age had moved away. The government seeks to accelerate this trend, making urbanization a national priority—at a cost of up to $6.8 trillion—in the hope of stimulating economic growth.

According to the church’s own data, the diocese of Fengxiang—which encompasses the village we visited—has 20,000 members, thirty-eight priests, sixty religious sisters, and forty-six churches. While the statistics sound impressive, they mask a certain stagnation. Protestant Christianity has grown rapidly in China, while Catholicism has not; the percentage of the population that was Catholic was higher in 1949 (roughly 1 percent) than it is today. The Catholic population of Shaanxi province—for a time the Vatican’s stronghold in China—is the same today (300,000) as it was a century ago. And the aging of the countryside means that Catholic villages may soon be under threat of extinction.

There are other challenges facing Catholics in China. The country’s 12 million believers are divided. Roughly half are connected to the state-approved Chinese Catholic Patriotic Association, which argues for a church independent from Rome. Roughly half belong to illegal “underground” churches loyal to the Vatican. For years, the Fengxiang diocese was the only diocese in China that was entirely underground, leading to the arrests of many clergy and the shutting of a monastery and two convents in 2001.

The government’s uneasy tolerance of religion still has lapses. In 2014, officials forcibly removed the crosses from four hundred churches in Eastern China, and thirty-five to forty churches were destroyed. At the end of the year, a university in Shaanxi’s capital banned student celebrations of Christmas, while people circulated slogans saying students should worship Mao Zedong, and “fight against foreign religions.”

In such conditions, it is not surprising that China under Xi Jinping has shown little interest in improving ties with the Vatican. Despite overtures from Pope Francis (he gave blessings to China and sent Xi Jinping his “best wishes” while flying over the country), Beijing’s public statements have remained chilly. A Vatican proposal to ordain bishops in China along the “Vietnam model,” with cooperation between the two sides on selecting candidates, was rebuffed. A foreign ministry spokesman simply repeated that Rome must first accept the “reality of Catholics in China” being under the government’s control.

Yet there are some signs of a possible thaw. This month, the country's first new bishop in three years was ordained in Anyang, an ancient capital of China. The consecration of Bishop Joseph Zhang Yinlin, the Vatican's desired candidate, marked a rare moment of agreement between Beijing and the Vatican on the selection of a candidate. [*]

Still, even if Catholicism faces challenges on many fronts in China, the church’s long survival in the countryside despite waves of persecution can be a source of hope. From the Boxer Rebellion to the Cultural Revolution, adversity has always strengthened the faith of believers. One can hope that those who remain will continue to find a way.

* This paragraph was updated on August 19, 2015, to reflect developments in the time since this story was originally posted.

Benjamin F. Carlson is the senior correspondent for GlobalPost in Beijing.