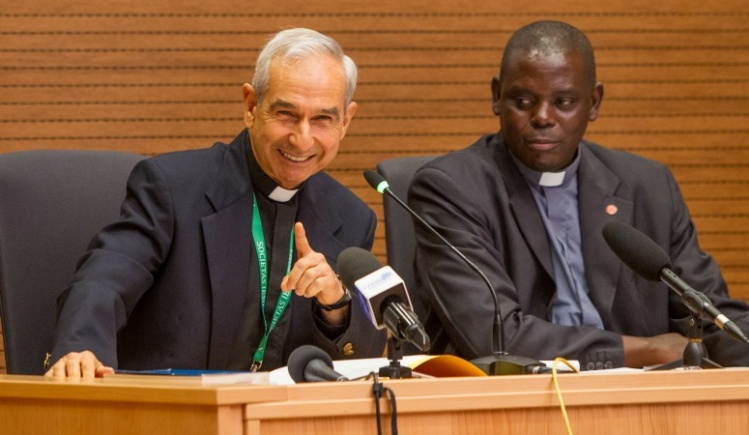 Pope Francis flies to Tbilisi on Friday for a weekend visit to Georgia and neighboring Azerbaijan.

It will be his second trip to the Caucasus region in three months, after having gone to Armenia in late June. And right about the time he boards his plane to return home on Sunday evening, his Jesuit confreres will be gathering for Mass in central Rome at their order’s mother church, the Gesù.

They will be celebrating the official opening of the Society of Jesus’s thirty-sixth General Congregation (GC36), a gathering at which 212 delegates from all over the world will elect a new Father General. The next “black pope”—as the Jesuit general is sometimes called—will be the thirtieth successor of the society’s sixeenth-century founder, St. Ignatius of Loyola.

It probably won’t be until sometime during the week of October 10 that the actual voting will begin. An absolute majority (fifty percent plus one, or 107 votes) is required for election. And when it’s all done and over, many people think it’s most likely that the new Jesuit general will hail from Asia.

The demographics of the Society of Jesus have changed so drastically in the past five decades that the majority of its 16,700 members are now from that rapidly expanding part of the world—5,600 of them to be precise; and 4,000 of those are from India alone.

The Jesuits in Europe and the Americas (5,000 each) continue to see a steady decline in their numbers, while their brothers in Africa (1,600) are slowly increasing. So will the electors opt for an Asian?

Whomever they discern to be their next Father General they should consider the new man’s skills in dealing with conflict, especially with higher Church authority.

It will not matter so much right now with their confrere Pope Francis as Bishop of Rome. But what will be the fate of the Jesuits under the next pope?

No one knows for sure, of course. But there’s a real chance that there could be a backlash against the Society of Jesus which produced such a prophetic, evangelical, and disruptive pope as Francis.

There are some 650 employees, mostly lay people, in the Holy See’s fledgling Secretariat for Communications. And roughly half of them are at Vatican Radio (which since its beginning in 1931 has been an apostolate entrusted to the Jesuits).

But Radio Vaticana will no longer exist—at least juridically—and the Jesuits’ role in Vatican communications will be thrown into limbo beginning next Saturday, October 1, when the statutes of the new secretariat go into effect.

Like the other eight media and communications branches that are officially operated by the Holy See (the press office, Pontifical Council for Social Communications, internet office, television center, printing press, publishing house, photo service center, and L’Osservatore Romano newspaper), the “pope’s radio” will be under the unified control of this new super dicastery (a wonkish word for “department” or “government ministry”).

Pope Francis had already announced this back in June 2015.

The idea, he said, was to help the Holy See’s communication system “respond ever better to the needs of the mission of the Church” by creating greater synergy and coordination among these various offices that, at times, has had overlapping competencies.

He made the decision after a six-month Vatican study committee (September 2014-March 2015), headed by Britain’s Lord (Christopher) Patten, outlined “a best possible configuration that built on the existing assets and that aimed over time to achieve the gains that closer integration and co-operation could make possible”.

As the British peer and former governor of Hong Kong said in a talk in London in May 2015, “The aim was to realign all the parts of the existing reality so that the ‘whole would be more than the sum of the parts.'”

I have no idea what Lord Patten thinks of Vatican Radio. But I’ve been told its forty different language programs and its ongoing integration of new digital technology impressed him.

But, whatever impression he had, it should be crystal clear to anyone without an axe to grind—especially against the Jesuits—that Radio Vaticana is the jewel in the Holy See’s communications crown. (Full disclosure: I worked there from 1989-2000.)

It has an international (and churched!) work force that is unparalleled in any other Vatican department. With its invaluable human resources alone it should have been the core and launch pad for the communication reform.

One need only think of the dismal lack of up-to-the-minute translation of the pope’s speeches and other important documents. Vatican Radio personnel could have been (and perhaps they will be yet) entrusted with translating the Holy See Press Office’s daily bulletin, for example, in several different languages, just as the United Nations and every other international organization does daily. A higher official in the Secretariat of State could then be the quality control person for these translations.

The radio is also in operation seven days a week, unlike any other major office except the Secretariat of State. That is a key asset in an Italian environment that is adverse to working on Sundays and holidays.

But the man Pope Francis chose to be prefect of the Secretariat for Communications, Msgr. Dario Viganò, doesn’t seem to have a very high opinion of Vatican Radio or the Jesuits, for that matter.

Last February the 54-year-old Milan priest gave an hour-long private talk to the radio’s staff to explain the communications changes. And in the first five minutes he criticized Fr. Federico Lombardi, SJ (the radio’s “head” for the last twenty-six years) and the Society of Jesus, basically questioning their competence and professionalism in the communications sector.

Certainly, Fr. Lombardi has had his critics within the radio over the years, especially since he’s had to make changes in programming, personnel, and so forth.

But as a number of my former colleagues told me, Don Dario achieved in those first five minutes of his talk something no one else has been able to do in the last twenty-six: he united all 300-plus employees around Fr. Federico.

“Give Detroit a cardinal, Pope Francis.”

That headline, which appeared a week or so ago in the Detroit News, startled me. But not as much as the story that followed, which read like a lobbyist’s effort to make sure that Archbishop Allen Vigneron, like his four predecessors dating back to 1946, also gets the red hat.

But first, a quick word about the author.

He’s Nicholas G. Hahn III, who is listed as the newspaper’s “assistant editorial page editor”. His blurb says he was previously editor of RealClearReligion.org and that he studied at De Paul University where in 2006-2007 he was named one of America’s top ten “campus conservative activists." Oh, yes, he was also a staffer for Donald Rumsfeld, the two-time US secretary of defense (under Presidents Gerald Ford and George W. Bush).

Now to his article…

Hahn speculates, like many of us, that Pope Francis will soon create a new group of cardinals and will likely look to the “peripheries” when he gives out the red hats.

“That might be good news for Detroit, an American archdiocese on the periphery,” he writes.

“Once among the largest dioceses in the country, the Motor City has lost nearly 300,000 Catholics and 91 parishes since 2000,” he adds.

And not only that. He also notes this:

“Detroit was the poorest major U.S. city in 2014 with about forty percent of its population unable to make ends meet and still over half of the city’s children living in poverty.”

Yes, this is all very true. It’s not hard to show that Detroit—even though it is in the early stages of a fragile, yet promising phase of re-development—is in many ways a marginal city or one on the peripheries.

But when the pope makes new cardinals, he does not consider particular places alone. He also—and more importantly—looks to the bishop there and how he shepherds his people.

Hahn tries (unsuccessfully, in my opinion) to depict Archbishop Vigneron as just the type of man the pope is looking for in a cardinal.

He says a lot of positive things about the prelate, including that he has “developed a respected reputation of being a gentle warrior for the church’s teachings,” adding “that seems to fit the Francis model.”

Many would disagree—including, I’d wager, a very large number of Detroit priests. Plain and simply, Allen Vigneron is hardly anyone’s idea of a Francis bishop.

But that being said, I agree with Hahn’s basic premise: there is a case to be made for Detroit getting a cardinal.

But it should be someone who has long been living among and advocating for some of the most marginalized people in society and the Church: the poor, the imprisoned, the sexually abused, those who have been discriminated against because of their skin color, sexual orientation or female gender.

A cardinal for Detroit might be someone who has also suffered humiliation and marginalization in his own person, say, by men more powerful in the episcopate.  How about someone who has been a courageous witness to the cause of peace and a firm opponent of war and violence of any type for any reason?

There is such a bishop in Detroit and he’s already eighty-six years old, so the pope won’t even have to sacrifice one of the 120 voting slots, the current nominal cap on the number of electors.

If Detroit gets another cardinal it should be a true Francis bishop who was such even before it became ecclesiastically fashionable or beneficial to career advancement.

Pope Francis will probably not give the red hat back to Detroit, but if he does may he give it to the retired auxiliary bishop, Thomas Gumbleton. Now that would be showing concern for the periphery.