The Pope: How Not to Be a Pharisee
By Robert Mickens
U.S. Catholicism
Letter from Rome
Pope Francis 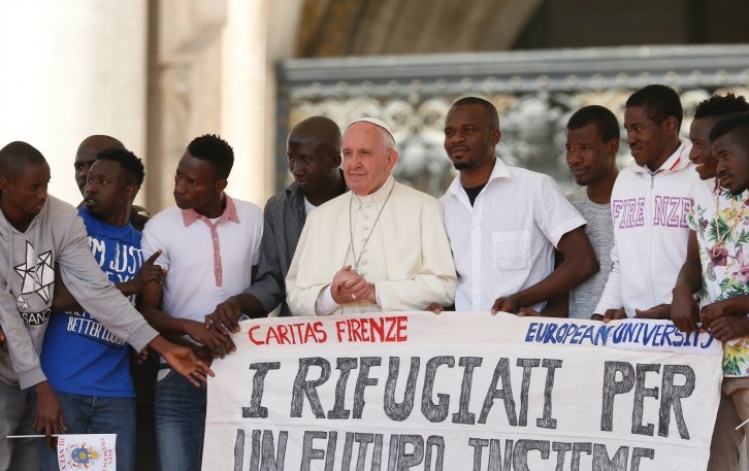 Pope Francis caused quite a storm last week by suggesting that a “great majority of sacramental marriages are null” because people of today’s generation really “don’t know what they are saying” when they make the life-long vow that is considered an essential part of Catholic marriage.

The comment—which the Vatican quickly changed to “a part” of such marriages are null—came during a question-and-answer period that followed an address the pope gave on June 16 to open the Diocese of Rome’s recent pastoral convention.

One commentator at Fox News in the United States called for Francis to resign, saying this was merely the latest in a long series of his gaffes and theologically dubious statements that have caused confusion among the faithful.

Unfortunately, most people who reported on the pope’s remarks did not bother to read the entire address (much of which was also ad-libbed) or the Q&A.

“Please don’t be shocked,” he said at the end of the session, which stretched on for more than an hour.

“I don’t know if I have answered your questions, but I speak to you from my experience as a pastor,” he said.

Not as a theologian or philosopher. Not as a university professor or an enforcer of correct doctrine or pure ideals.

Pope Francis has been shaped by the experience of being a minister to the poor, the weak, the imperfect, and those who are or feel marginalized. And this experience was evident in his moving address that, while it may have scandalized some folks, certainly brought hope to many others.

He evoked the biblical image of the Pharisee who prays, “O God, I thank you because I am not like others—thieves, evildoers, adulterers; and not like this tax collector” (Luke 18:11).

He said the Pharisee’s prayer illustrates a constant temptation to embrace a “separatist attitude,” thinking that “we strengthen our identity and security when we differentiate or isolate ourselves from others, especially those who in live in a different situation.”

But the pope said identity is forged by inclusion and belonging. “My belonging to the Lord, this is my identity. Not cutting myself off from others so they don’t ‘contaminate’ me,” he stressed

He said we must recognize that each one of us is in need of conversion and mercy because none of us is perfect. And he added that this recognition was essential for looking at the reality of situations in life, as they are, not how we think they ought to be.

“But nothing is comparable to evangelical realism, which does not stop at describing situations or problems—even less sin—, but always looks beyond and is able to see that behind every face, every story, and every situation there is an opportunity and a possibility,” the pope said.

“Evangelical realism is concerned with the other—with others—and does not make ideals and ‘the way things ought to be’ an obstacle for encountering others in the situations in which they find themselves,” he added.

Francis said this do not mean jettisoning the “Gospel ideal” or fudging doctrine; rather, it means “avoiding judgments and attitudes that do not consider the complexities of life.”

“Evangelical realism dirties its hands because it knows that ‘wheat and weeds’ grow together. And the best wheat—in this life—will always be mixed with some weeds,” he continued.

“Jesus dirtied his hands more than anyone. He wasn’t one of ‘the clean,’ but went to the people and among the people and took them as they were, not as they ought to be,” the pope said.

Then he rephrased the prayer of the self-righteous Pharisee, saying: “I thank you, Lord, because I belong to Catholic Action, or to this association, or to Caritas, or this or that group… and I am not like those in my neighborhood who are thieves and delinquents.”

Such an attitude, he concluded, “does not help our pastoral work!”

The 79-year-old pope heads to Armenia on Friday for a three-day pastoral visit to the world’s first Christian nation.

It will be his fourteenth foreign journey and, as someone pointed out, half of all the destinations have been in Asia. That includes the Holy Land countries of Jordan, Palestine and Israel, as well as nations further east: Korea, Sri Lanka, and the Philippines. In all these places except for the latter, Catholics are a minority. It’s another sign of Francis’s desire to go to the peripheries.

During this weekend’s trip the pope will visit Tzitsernakaberd, a monument to those Armenians who were massacred in 1915 by the Turks. Though the site is officially called the “Genocide Memorial and Museum,” the Vatican program for the visit calls it “a memorial of the massacres.” The changed wording was meant to avoid antagonizing Turkey, which rejects the label of “genocide.”

That will be tricky since the papal visit is seen as important for further strengthening relations with the Armenian Apostolic Church, an Orthodox community not in full union with Rome.

The visit will also be one of the last major events before the Roman curia begins what used to be a slower-paced summer period starting on June 30. However, Francis has kept things humming despite this time-honored custom.

Next Tuesday he will invite Benedict XVI to the Clementine Hall inside the papal palace for a special celebration to mark the former pope’s sixty-fifth anniversary of priestly ordination.

Then the next day—Solemnity of Saints Peter & Paul, founders of the Church in Rome—he will celebrate a Mass during which he’ll bless the palliums, the small woolen bands that will then be conferred locally on the metropolitan archbishops appointed in the past year.

On Wednesday of this week Pope Francis held his last weekly general audience before the summer break. And he did something neither he nor any of his predecessors has ever done. He invited a dozen African refugees to join him on the stage, where they sat around him as he delivered his catechesis and greetings for the some 1500 or more people in St. Peter’s Square.

Rome is easily one of the world’s most beautiful and historically important cities. But over the last decade or so, and especially in the past couple of years, it has come to look more and more like a broken down garbage heap.

Signs of decline and dysfunction appear immediately the moment one lands at Fiumicino Airport, where travelers often are forced to wait a half hour or more before their checked luggage emerges. Next come the non-functioning escalators and “out of service” self-ticket machines for trains to the city.

First-time visitors usually shrug off these initial minor inconveniences, still gushing with excitement to be in the Eternal City. But once they arrive at the main rail station, Stazione Termini, they must fend off the legendary pick-pocketing gypsy kids while being careful not to stumble on one of the many cracks or holes that mar the sidewalks.

Then there’s garbage. It is everywhere. In the streets, on the walkways, and piling up around overflowing trash bins.

Graffiti is just as abundant as the rubbish, plastered on buildings and traffic signs, as well as on the buses that are part of Rome’s notoriously unpredictable (and unreliable) public transport system. Let’s not even talk about the traffic, the only major city in Europe that allows so many cars in the historic heart of town.

“This has become a Third World city, but with First World prices,” groans a long time resident and friend from North America.

Well, we just elected a new mayor this past Sunday and she has vowed to cure the city of all these other ills, including widespread corruption.

Virginia Raggi is the first woman ever to be Rome's mayor. She won the vote in a run-off election on the very day she celebrated her thirty-eighth birthday. Her victory is a triumph for the populist Five Star Movement (M5S) to which she belongs, an anti-establishment party founded by a comedian-turned-politician named Beppe Grillo.

Ms Raggi is a lawyer and local councilor. She is married and the mother of a young boy. A self-described non-practicing Catholic, she said during the mayoral campaign she would explore how to make the Vatican and other Catholic organization pay back-taxes on their commercial properties. The figure is often cited as somewhere between €250 and €400 million.

The last mayor, Ignazio Marino, promised to do many of the same things that are on Ms Raggi’s agenda. But he was run out of town after being caught using public funds for private meals and travel. It was a minor offense, but enough to bring down a surgeon-turned-senator who was too weak and unexperienced to take on the various clans that have an iron grip on the city.

It’s hard to see how the new mayor, with even less experience, will be able to do better. But Rome desperately needs her to succeed.