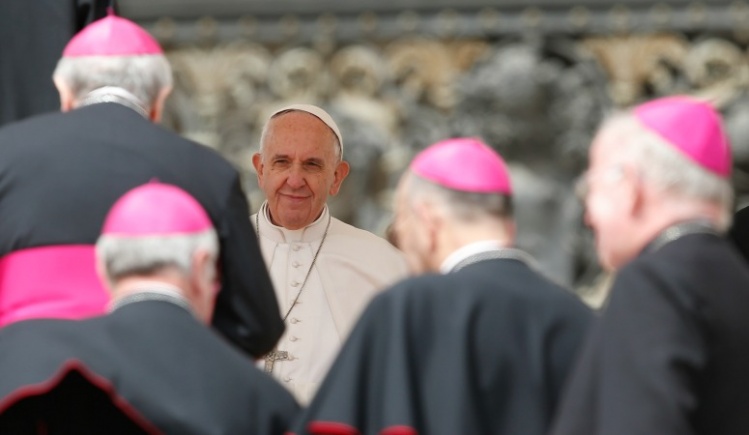 Pope Francis has been both applauded and criticized for creating a new process for investigating and eventually removing bishops for negligence, especially in their oversight of sexual abuse cases. He lays it out carefully in a new motu proprio published last Saturday under the title Come una madre amorevole (Like a loving mother).

Some see this initiative as the start of a Copernican revolution in the Vatican’s approach to the (still very far from over) clergy sex abuse crisis, while others think it is actually much ado about nothing.

Most commentators have claimed that Canon Law (can. 192-195) already provides for the removal of bishops, and the new motu proprio merely spells out a process whereby one of four different Vatican congregations actually go about this. But, in fact, bishops are not specifically mentioned in those canons, which deal only generically with “removal of ecclesiastical office” at all levels.

In his new document, Pope Francis removes all doubt and says a congregation can investigate a bishop and issue a “decree of removal” if it deems the prelate has been negligent of his pastoral duties in a “very grave” way. Furthermore, it says such negligence need only be “grave” when concerning the abuse of minors or vulnerable adults.

The commentators say the only real novelty in all of this is the document’s establishment of a “college of jurists” who will help the pope review a congregation’s decision before he approves its decree of removal. Yes, this is novel. But so is the new, carefully spelled-out process for investigation and removal.

That’s because only the Roman Pontiff has the authority and power to remove another bishop. He does not need an elaborate process to do so. Advocates for abuse victims rightly point this out. They believe a process will only stifle swift and decisive action against bishops who cover up clergy sex abuse.

These advocates and most other people see the motu proprio as being aimed at removing such bishops. Some have noted (rightly) that it is thus a clear response to (let’s call it a circumvention of) the Congregation for the Doctrine of the Faith (CDF), which has blocked the pope’s decision (announced one year ago!) to establish a “judiciary section” in the CDF tribunal to try bad bishops.

But Come una madre amorevole is not devised for sacking only those bishops who are negligent in sex abuse matters. It is also about removing those who have “committed or omitted acts that have caused grave harm to others, whether they are physical persons or an entire community.” The document says that harm can be “physical, moral, spiritual or patrimonial.”

There is something else going on here that most people seem to have missed. Francis, with this new document, has initiated a long-term process that has the potential of being another paving stone on the path towards a truly collegial (and synodal) model of Church governance.

That’s not how one respected canon lawyer in the United Kingdom sees it. He believes the pope’s new motu proprio is actually a move further away from synodality.

“Traditionally, the bishop in his diocese has been, almost literally, a law unto himself. Recovering the dignity and authority of that office from encroaching centralization towards Rome was a key theme of the reforms of Vatican Council II,” writes Ed Condon in the Catholic Herald.

“While the reasons he has done so are obvious and compelling, Pope Francis, for all his emphasis on synodality, has, for good or for ill, just dealt a major blow to the independence of the average diocesan bishop,” he says.

Well, hardly… Long before Francis issued his new document not a single bishop in the Catholic Church was so independent that the Roman Pontiff could not remove him. Pope Francis has not further centralized his authority to do so; he has actually begun to share it. Or at least open it to greater consultation and discernment. The process he’s initiating to do so provides for an investigation in which the one being investigated is informed of the charges against him and given the right to defend himself.

“Every step of the inquest will be communicated to him and he will always have the opportunity to meet the superiors of the congregation. Such a meeting, if not initiated by the bishop, will be proposed by the dicastery,” the document says.

It also allows for the congregation to consult other bishops from region or conference to which the investigated bishop belongs. And it stipulates that any decree of removal must be decided at the congregation’s ordinary session. That means members of the congregation—including those who are diocesan ordinaries around the world—have a voice in the deliberations.

This is not called centralization. It is called episcopal accountability. Until now Vatican officials have stressed that bishops are accountable only to God and their consciences. But now they must undergo a sort of peer review when there are allegations of negligence, abuse of office or bad shepherding. Rather than centralize this in the person of the pope or a few Vatican bureaucrats, this new document brings more people from outside of Rome into the process.

And it could be further developed in the future.

For example, the initial investigation of allegations of negligence against a bishop could eventually be started at the regional level, perhaps with the metropolitan archbishop. Or, more ideally, the currently limited role of the metropolitan could be expanded to include periodic reviews of his suffragen dioceses.

The main point, though, is that the Bishop of Rome should not be acting against a bishop—or shielding him—either independently or merely on the advice or complaint of a few people that might have his ear. And bishops who are accused should have the right to be informed of the process and the right to defend themselves. The new motu proprio makes this possible.

That wasn’t the case with Bishop William Morris. Benedict XVI removed him from his Australian diocese in 2011 after a special Vatican-appointed investigator (Archbishop Charles Chaput of Philadelphia) and certain cardinals claimed he was not upholding certain teachings of the Church. The bishop did not have a leg to stand on.

Or a process through which he could appeal.

As I have suggested on a number of occasions before, the “healthy decentralization” of the Church and the implementation of greater synodality—especially by strengthening the authority of episcopal conferences—will entail serious growing pains.

That’s because it will take another two or three generations to get a worldwide body of bishops that is up to the task. And nowhere is that more agonizingly clear than in the United States, where the loudest voices in the national episcopal conference (USCCB) continue to project signs of pastoral ineptitude, theological illiteracy and insular (non-) thinking.

One thing you can say for them, though, they are not letting Pope Francis push them around. They are not his lapdogs. No, many of the Americans have soldiered on like cultural warriors, more tightly embracing the inward-looking pastoral priorities they adopted before Francis was elected Bishop of Rome. And they generally have been slow and suspicious to take up the issues he’s made synonymous with his own global ministry.

For example, last November the USCCB elected Archbishop Charles Chaput—who has not exactly welcomed the pope’s openness to “diversity”—to chair its committee on marriage and family life. The conference president, Archbishop Joseph Kurtz of Louisville, recently appointed him to head a working group on the implementation of the pope’s apostolic exhortation on the family, Amoris Laetitia.

That raised eyebrows, but it was not totally off the wall, given Chaput’s new post in the conference and the fact that he is also a member of the three-year permanent council of the Synod of Bishops.

But if you want to have a look at the brazenness, cynicism, and defiance of at least some members of the U.S. hierarchy, get a load of this: the chairman and vice-chairman of the Board of the Governors for the Pontifical North American College (NAC)—the U.S. seminary in Rome—are among those most notorious for mishandling clergy sex abuse cases.

In the May edition of the college newsletter, Roman Echoes, one finds Archbishop John Myers (Chair) of Newark and Archbishop John Nienstedt (Vice-Chair), retired ordinary of St. Paul and Minneapolis, at the top of the list. If your jaw did not drop, you’re not paying attention.

Archbishop Myers was saddled with a coadjutor bishop in 2013 when he came under fire for reassigning at least one priest who had abused minors. Then he caused more of a stir when it was learned that he had invested half a million dollars in renovating a weekend home in a posh neighborhood where he plans to retire.

Archbishop Nienstedt, for his part, was forced to resign one year ago after prosecutors brought criminal charges against his archdiocese “for its failure to protect children” from predator priests. These two men head the Board of Governors of the place many U.S. bishops—who, like myself, are NAC alumni—love to call the flagship seminary of the American Church.

In any other institution, they would have lost their seats long ago.