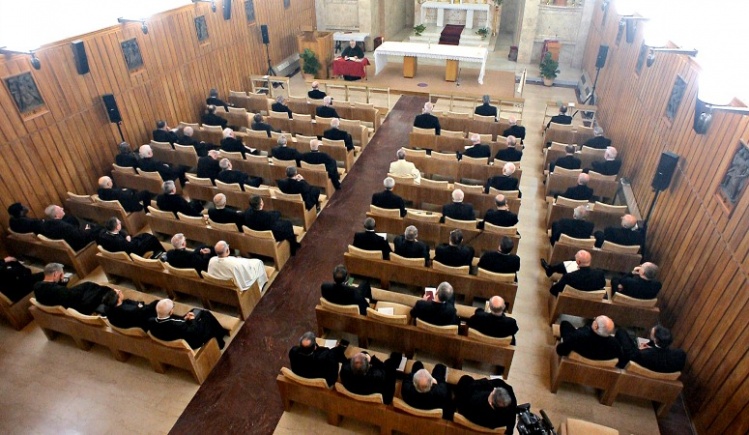 Anticipation is growing for the release of Pope Francis’s new document on marriage and family life, which he evidently already signed on the March 19 Feast of St. Joseph.

Properly known as a post-synodal apostolic exhortation, the text is to be the pope’s most authoritative teaching to date on marital issues. It will be the latest (though probably not the final) phase of a more than three-year discernment process that has included two consultations with Catholics worldwide and frank (sometimes heated) discussions among their pastors at two different major gatherings of the Synod of Bishops.

The new document, originally written in Italian, is currently being translated into others languages. It is reportedly some 200 pages long. If that’s the length in Vatican booklet form, it would amount to about eighty or so single-spaced, A4-sized pages. But if the exhortation is longer than that, as some have suggested, it’s sure to include everything on marriage except the kitchen sink (though there will probably be some flying plates and a quip or two about mothers-in-law).

But while anticipation builds for the new document, exasperation is also growing over the tortoise-like speed with which Papa Franceso is moving to reform the Roman Curia (and other structures in the Church). The pope does not meet again with his nine cardinal advisors (the "C9") who are helping him map out the reforms until April 11-13. And it is hoped that the process begun over two years ago to thoroughly reorganize Catholicism’s central bureaucracy will finally show some signs of forward movement.

Up to now there has been no real reform. Many people continue to praise the pope and Cardinal George Pell, the Vatican’s money man, for implementing financial “reforms,” especially at its so-called bank, the Institute for the Works of Religion (IOR). But these have merely consisted in introducing modern accounting methods and bringing an offshore financial institution into compliance with international banking laws.

Another area where Pope Francis has been slow is in replacing top Vatican officials. At least six office heads are already 75 or older. Four of these are cardinals—Francesco Coccopalmerio, seventy-eight, president of the Pontifical Council for Legislative Texts; Antonio Maria Vegliò, seventy-eight, president of the Pontifical Council for the Pastoral Care of Migrants; Angelo Amato, seventy-seven, prefect of the Congregation for the Causes of Saints; and Lorenzo Baldisseri, seventy-five, secretary general of the Synod of Bishops.

And there are several more cardinals and bishops who have been in the No. 1 or No. 2 slot at important offices for well over their five-year terms. That includes officials at five of the eight congregations and all but a couple of the remaining ten pontifical councils. Some of these men will be shuffled to other positions when the Curia reform is finally implemented, especially with the suppression and combining of dicasteries.

But there are other offices, like the congregations dealing with bishops and Eastern Churches, which are sure to survive any reforms. And their respective and powerful prefects—Cardinals Marc Ouellet and Leonardo Sandri—will soon be completing six years (for the French Canadian) and nine (for the Italo-Argentinian). It’s about time for the pope to move them along…

One of the prerogatives that the Bishop of Rome has steadily accrued to himself over the last couple hundred years is the right to appoint bishops to dioceses around the world.

He does this with the help of the above-mentioned Congregation for Bishops, Propaganda Fide (for mission territories), and with the apostolic nuncio or delegate in each country or region. In this rather closed-in, “old boys network” these various entities and persons consult with others (mostly other bishops, priests, and influential Catholics), vet candidates, and then give advice.

But, in the end, the buck stops with the pope. He makes the final choice and he must own the consequences of each of his appointments.

Pope Francis has made it clear on several occasions that he wants pastoral bishops—prayerful men who walk and work among their people. And he’s surprised (and disappointed) some of the more princely and career-minded men already in the episcopate (and those priests who are pining to be named to it) with some of the appointments he’s made so far.

But at times, and in certain parts of the world, the pace of bishops appointments has been discouragingly slow. This is a major problem, much more than delays in Curia reform because, in Catholic theology, the bishop is essential to the existence of a local church.

Since Pope Francis was elected in March 2013 more than a hundred dioceses around the world have fallen vacant; that is, the bishop either died or was moved and has not yet been replaced. More than a hundred! Dozens of other ecclesiastical jurisdictions (as they are officially called) were already vacant when Francis took office and some will probably be phased out for various reasons.

But that is not even half the story. More than 150 other dioceses are currently headed by someone who has already reached the retirement age of seventy-five, but has been allowed to remain in post.

Three of the eldest are cardinals in important places. Karl Lehmann (Bishop of Mainz in Germany) turns eighty in May, while Jaime Lucas Ortega y Alamino (Archbishop of Havana) andNicolás de Jesús López Rodríguez (Archbishop of Santo Domingo) reach that milestone in October.

When the pope finally takes an ordinary’s resignation, it is often a number of months until his successor is named. Why the delay?

We must go back to start. The papal nuncios and the Congregation for Bishops (or, again, Propaganda Fide for the mission churches) must shoulder most of the responsibility for this slow process. They simply are not finding the candidates to fill these crucial positions. Sometimes it’s because priests refuse appointments. But other times, the pope refuses the candidates his advisors put before him.

The whole method and rationale for selecting bishops needs a major overhaul so that there is better discernment and consultation among a significant representation of all the People of God and not just a cabal in Rome. But until that happens Pope Francis still has to pick up the pace in appointing pastors to lead these shepherdless local churches. This is a matter of justice.

And it’s one that requires that he have people who are willing to work with him at the Congregation for Bishops, Propaganda Fide, and nunciatures around the world.

Only he can change the leadership and membership of congregations. But his Secretary of State, Cardinal Pietro Parolin, can also help him by finding some good apostolic nuncios, the men who perhaps play the most important role in episcopal appointments.

There are some seventeen diplomatic posts without a nuncio or delegate. And there are three headed by men who are already seventy-five, including Archbishop Carlo Maria Viganò, the pope’s man in Washington.

If Francis hopes to put his own mark on the episcopate in the United States he will have to make a wise choice in replacing Viganò. The clock is ticking. What is he waiting for?

An even more permanent way a pope puts his stamp on the church’s leadership and direction is through the creation of cardinals. If a man in red does nothing else of great significance during his earthly life, the vote he casts in a conclave is of singular importance—that is, if he should get the opportunity to enter one of these elections for the Bishop of Rome.

Not all cardinals do. One must be under the age of eighty, according to current legislation, in order to be an elector. And during his long reign many of the men John Paul II named to this exclusive club died or aged out well before the now sainted pope gave up the ghost. The current rules also say that the number of electors shall not exceed 120, though the Polish pope dispensed with that at times, which was his right.

There are currently 116 electors. Only four others turn eighty and lose their vote by the time the Feast of Saints Peter and Paul rolls around—that’s for anyone wondering if Pope Francis will hold a consistory on the June 29 commemoration of Rome’s patrons.

If he adheres to the 120 ceiling, that gives him only eight slots to fill. If waits until November—say, the Feast of Christ the King on the twentieth of that month—he could add another five for a total of thirteen new cardinals.

But beyond that, only four cardinals age out in 2017 and just another seven lose their vote the following year. Currently, Francis has named only thirty-one of the 116 electors. Barring any deaths, his personally chosen cardinals will still not be a majority of voters even at the end of 2018.

How important is it that the men he puts into the red-hatted college are the leading contingent among those who will elect his successor? It’s vital. Because the next pope will decide whether and how to proceed with the renewal and reforms that Francis has painstakingly begun. But unless he lives and remains Bishop of Rome for several more years it is hard to see how Francis can achieve this. There are a number of ways around this seeming conundrum.

The College of Cardinals is a human structure. It has not always existed. And it has not always been the body that elected the pope. Francis could modify the role of this institution through a drastic reform the method of electing the Bishop of Rome by including presidents of bishops’ conferences and other voting delegates from other sectors of the church. But that would create a huge backlash among many Catholics.

There is another possibility. He could raise the limit on the number of electors (which is arbitrary anyway) from the current 120 to, say, 140 or 150. And in a global Church that the Vatican boasts is growing that would be the most normal and reasonable thing to do.