The Kennedy Legacy, the People’s Task 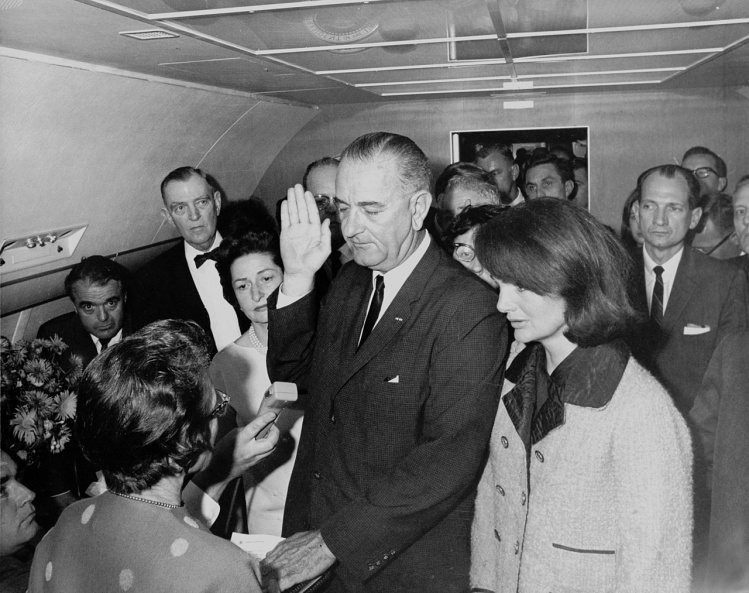 After the assassination of John F. Kennedy, Lyndon B. Johnson is sworn in as U.S. President aboard Air Force One, Love Field, Dallas. (Wikipedia/Cecil Stoughton)

It is still not easy now, many days after the horribly well-aimed shots, to explain why the nation was so moved, so horrified, by the assassination of President Kennedy. He had not held office very long, had been elected only by the slimmest of margins, had aroused to new heights the antagonism of segregationists. In the opinion of many observers, he stood a chance of losing the 1964 election. If he had made friends, it was not always clear just who they were. The Negro civil rights leaders had accused his Administration of “selling out” to his opponents; the Northern liberals often expressed dismay that the “new frontier” had yet to materialize; a book by a conservative, purporting to explode the Kennedy “myth,” made the best-seller list; his programs were limping through Congress.

By all odds, those were not likely ingredients for that outpouring of genuine grief, for that sense of desolation, which gripped the nation at the first news of his death and which mounted hourly up to those last moments which saw Cardinal Cushing at graveside slowly, with sad deliberation, sprinkle holy water on the grave of a “wonderful man.”

But the odds were beaten. They were beaten by the intangible style which President Kennedy brought to his office: that combination of wit, elegance, appearance, personality, of the merger of the jet set and Irish Catholicism, of Theodore Sorenson and the “Irish mafia.” Most of all, they were beaten by the utter senselessness of the assassination. A young man, in his prime, shot down; and not, so far as is known, even for the sake of a plot. Even that, in a twisted way, would have brought a glimmer of order and motive. But we came away with nothing- unless it be a dramatic reminder of the fact of evil and of death, of hatred and passion, of the folly of which man is capable. We were well prepared for the First, purple-garbed Sunday of Advent.

Yet Advent is itself an anticipation. It looks forward to Christmas, that most magnificent sign of new life and new hope. It reminds us that hope should not be allowed to die. It tells us that our suffering has a meaning. It instructs us to make ourselves ready for a new life—by contrition, by penance, by sacrifice. It teaches us to merit white garments by wearing somber ones. It shocks us by the stark promise of judgment.

In his first days in office, President Johnson has shown that he has not missed the only possible moral of the assassination.
sharetweet

In his first days in office, President Johnson has shown that he has not missed the only possible moral of the assassination. In his Thanksgiving Day message (about the only thing we had to be thankful for) he urged, indeed implored, the nation “to banish rancor from our words and malice from our hearts-to perfect our unity North and South, East and West, to hasten the day when bias of race, religion and region is no more and to bring the day when our great energies, and decencies and spirit will be free of the burdens we have borne too long.”

But that is easier said than done, and President Johnson must know how recalcitrant the human spirit can be. He had only to look, with the rest of us, at the shooting of Lee Harvey Oswald to see that. Or to read the scattered outbursts of those who praised the assassination; or who commended the shooting of Oswald; or who vilified the Texas minister who revealed the glee of some school children at the President’s death—or, yes, even those who threatened the life of the pitiable General Walker should he be allowed to speak at a Long Island meeting. It hardly took a moment, in short, for American life to return to normal.

And we have surely learned something about Lyndon Baines Johnson. As a Senator and as Majority Leader, Mr. Johnson was something of a legendary figure. A strong leader, a master politician, a magnetic if irritating personality, a demon for work, a brilliant tactician-all of these things and more were said about him. As a Vice President we heard, though it was not always apparent, that he was as active as ever, if in a different, less spectacular way. Slowly, little by little, he managed to shed at least some of those native layers which made him suspect to Northern Democrats. Slowly, too, so we heard, he was taking steps to increase his initially scant grasp of international affairs.

But why deny it?—there were very few who thought him of Presidential stature. At most he represented one more illustration of John F. Kennedy’s political talents. A grand man, Lyndon Johnson, to help capture some Southern and Western votes, to help balance the Democratic ticket-but not a man for the Presidency.

Along with all the other doubters, we may have made a serious mistake in judging his capacities. The past days, to understate the matter, have put some new evidence before the nation. It is there, first, in his address to Congress and in his Thanksgiving message. He can, obviously enough, speak with moving force. If, as commonly said, he relied heavily on the talents of Mr. Sorenson for his address to Congress, then he has shown both sense and sensibility. The evidence is there, secondly, in the vigor he displayed during his first days in office. At a time when the rest of us drifted listlessly about, he was on the phone-to Negro leaders, to union presidents, to businessmen, to foreign diplomats, to the widow of the slain Dallas policeman.

It is there, thirdly, in the fact that he chose to emphasize in his address to Congress the civil rights bill. “No memorial oration or eulogy,” he said, “could more eloquently honor President Kennedy’s memory than the earliest possible passage of the civil rights bill for which he fought so long. We have talked long enough in this country about equal rights. We have talked for a hundred years or more. It is now time to write the next chapter, and to write it in the books of law.”

We think it must have taken some nerve to say this. It would have been easier, and surely excusable, to let the occasion of the address go with some lofty, backward-looking words. The Southern legislators, who found it easy to applaud the patriotic sentiment, sat on their hands when civil rights were mentioned. True enough, as a tested politician, Mr. Johnson must have known that his address would have much to do with establishing his acceptability to Democratic liberals. That he apparently succeeded, at least for the moment, in calming partisan doubts while at the same time sustaining the mood of national unity, is not a feat to be slighted.

Despite these good signs, it is perfectly understandable that many in Washington should still feel a sense of emptiness. This is particularly true of those younger men who came to Washington filled with zest and drive, animated by the aura of youth and vigor which Mr. Kennedy projected so well. But life has to go on; and it will and must go on under the guidance of President Johnson.

The sign of youth is less age than spirit. President Kennedy tried to take the nation into a new era—and that is a job of the mind and spirit. It can be done by a man who chooses to go bareheaded or by one who wears an extravagant Texas 10-gallon hat; by a man with a Boston-Harvard accent or a Southwestern twang; by a man born with a silver spoon in his mouth or in rural poverty. What counts is his vision of the work to be done. What counts is the support the nation gives him. What counts is our power as a people to put aside the sniper that is in each of us, to put him aside in favor of that self which John Fitzgerald Kennedy sought to draw forth.

From the Archives: The Kennedy Legacy