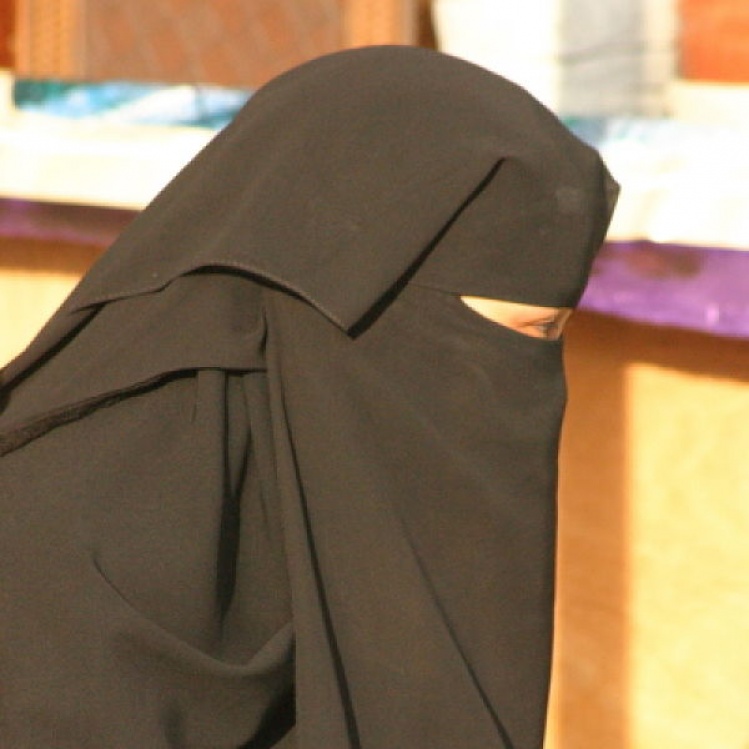 My wife and daughter and I spent two days at the Jersey shore. One afternoon the sun was fiery, the motel pool crowded. One family caught my attention. They were enjoying the pool—at least, Dad and the two little boys were. As they disported themselves, splashing and laughing, Mom was sitting in a chair alongside, looking on with a stony expression. She didn’t seem to be having much fun. Maybe it was because she was swathed in neoprene—a black dive suit that covered her from wrists to ankles. Plus a black head scarf covering her head and pulled close around her face.

A Muslim mom, at the swimming pool.

Presumably her outfit was intended to enforce modesty and ward off the intrusive male gaze—yet because of it, I found myself staring. I kept trying to imagine having to cover yourself in thick black foam and a headdress on one of the hottest days of summer, and then look on while the males in your family frolicked, in swim trunks, in the water. It must be pretty awful, I thought. What a poor way to treat women.

Was it? Is it? And who am I to think so? A liberal American in this situation finds himself in a quandary. American liberalism insists on the diplomatic acceptance of cultural difference as a structuring reality of a multicultural society, and proposes the social-work concept of “cultural competence” as a means of fostering it. Yet as I sat at the pool, I could feel these principles clashing in me against the apparently all-but-inexpungable intuition that covering women in neoprene on a torrid summer day constitutes a subjection of women.

How to square one’s commitment to pluralism with one’s abiding moral intuitions? These dilemmas have beset Europe, perhaps most notoriously in the controversies surrounding the public wearing of the hijab, a sartorial symbol of Islamic religious affiliation that the French government has taken legal steps to curtail. Such laws are hard to imagine here—partly due to our tradition of preserving religious freedoms, but also because diversity is so basic to American life. One in five of us speaks a language other than English at home. Moreover, we’re in an era when the idea of the melting pot has lost its luster, and we want our ingredients to keep their separate flavors. To that end we sponsor workshops in schools and companies, we hire diversity consultants and trainers and deans to spread the message that American diversity—racial, ethnic, religious, linguistic—is its greatest asset. That it will enrich us all, if only we let it.

My experience tells me that diversity and multiculturalism are trickier than that. In daily life, diversity often means somebody doing something that baffles or annoys you. How can those people treat their dog like that? Why does that family leave all that junk in their yard? What is with that hair? My own education in multiculturalism includes five years spent in Germany. Life in another country involves frequent cross-cultural snafus. I recall walking through Frankfurt with a German friend who encountered an old acquaintance. The two chatted, then my friend and I walked on—without my ever being introduced. “You’ll never see her again,” my friend said when I called her on it,” so why introduce you?” Entirely rational, and yet as an American, when I don’t get introduced, I can’t help feeling dissed. Don’t you see it’s rude? I wanted to ask.

It wasn’t rude, of course; just different. And the protocols of introduction are a small cultural difference. What about practices you find abhorrent—polygamy or female circumcision, or blood sports with animals, or eating cat brains, or promoting morality through public whippings? There are Asian societies in which women apply burning hot coins to their children’s skin to treat certain illnesses. Culture, or child abuse? I recall a newspaper photo some years back of Korean demonstrators protesting the visit of Japan’s prime minister to a war shrine. Their method of protest was to kneel in a row—then take out cleavers and simultaneously chop off their own little fingers. Diversity is hard precisely because it’s human nature to go around thinking that other people are strange, while your people (friends/ethnic group/social class/religion/nation) are normal. In this way we are all wildly egocentric, Eurocentric, phallocentric ... whateverocentric.

And so at the pool I was conducting this running argument with myself. Could I really know whether the Mom in the diver’s suit was unhappy? Maybe that wasn’t a “stony” expression at all. And could I really base fundamental judgments on mere clothing? Cultural competence proponents point out that we tend to focus on the superficial, visible expressions of culture, the so-called “five F’s”—food, fashion, festivals, folklore, and flags—while missing aspects of “deep culture” such as concepts of self and personal space; religious rituals and views; approaches to problem solving and to interpersonal relationships and personal discipline; and so on. Was I just being culturally incompetent?

On the other hand, what I have read about the status of women in Islamic theocracies such as, say, Saudi Arabia, where they can’t drive, can’t vote, and so on, appalls me; and the full-body cloaking seems both an expression and a means of enforcing these invidious gender distinctions. However I might talk myself around it, my thoughts—my gut feelings—drifted back to this fundamental judgment.

TO SHED SOME LIGHT I returned to Isaiah Berlin, that great articulator and champion of pluralism. In the opening essay of his 1990 book, The Crooked Timber of Humanity, Berlin recounts how reading Machiavelli “planted in my mind the realization, which came as something of a shock, that not all the supreme values pursued by mankind now and in the past were necessarily compatible with one another.” In Vico and Herder he found this thought carried one big step further, to “what I should describe as pluralism—that is, the conception that there are many different ends that men may seek and still be fully rational... capable of understanding each other and sympathizing and deriving light from each other.”

The coexistence of such different ends, Berlin observed, all but guarantees conflict, since values “can be incompatible between cultures, or groups in the same culture, or between you and me.” Individuals or groups will not abandon their particular views of the true and the good, nor should they; and so conflicts in values are “an intrinsic, irremovable element in human life.” “But the collisions, even if they cannot be avoided, can be softened,” he wrote. Compromise; the balancing of claims; the attempt to see the other position whole, and not in pieces; the willingness not to “dramatize the incompatibility of values,” but to point to where people in different societies do in fact agree about what is right and wrong. “Of course social or political collisions will take place,” Berlin acknowledged. “Yet they can, I believe, be minimized by promoting and preserving an uneasy equilibrium, which is constantly threatened and in constant need of repair—that alone, I repeat, is the precondition for decent societies and morally acceptable behavior, otherwise we are bound to lose our way.” And, he added, “a certain humility in these matters is very necessary.”

An uneasy equilibrium, in constant need of repair and demanding a certain humility: that seems right for how we go about reckoning with what Berlin calls “worlds [and] outlooks very remote from our own.” I confess that I find it confounding at times. Not in the abstract, but in the particular—in the reality, say, of a woman in neoprene on a hot day. It is disconcerting not to know what you really believe—or rather, perhaps, how you should think about what you believe. I find this much ambivalence highly uncomfortable. But I guess that’s what Berlin was saying.