The Joy of Love

I’m writing today about a remarkable Catholic couple and their marriage, life, and death together. My wife, daughter and I went to Maine last weekend to attend a wake and funeral mass for Lucille and Robert Robinson, parents of one of my best friends, Michael Robinson. Married for sixty-three years, Lucille and Bob died within six hours of one another—on the same night—as they slept side-by-side in the assisted-living facility where they’d been living, in declining health, for two years. They were ninety-three and ninety-five years old, respectively.

Their wake was at a funeral home in downtown Portland, a stately former residence whose rooms were filled with Robinson family photographs and memorabilia, creating a warmly domestic feeling as the couple’s four children, nine grandchildren and many friends gathered to exchange sympathy and stories. I had certainly never been to a double spousal wake before, and it was deeply comforting and apt to see husband and wife in mutual repose, their caskets arrayed alongside one another. Both held rosaries, and on Bob’s chest lay the medal and insignia of the pontifical honor of the Order of St. Gregory, which he received—twice—for his service to the church. Around the room the panoply of photos brought back the couple’s youth; especially lovely was a dashing shot of the two smiling out the back window of the car as they drove off from their wedding in 1952.

The Robinsons’ story forms a template for American Catholic life in the last century. Growing up during the Great Depression, both Lucille and Bob served in the military during World War II, she as a Navy nurse, he as an Army sergeant. After war’s end they returned to join the wave of vets whose belated college educations and subsequent hard-working lives helped propel postwar America to world dominance. The first members of their immigrant families (hers Italian, his Irish) to attain higher education, they both attended Boston College, where they met at a party during Lent in 1951. At the party, as they drank lukewarm beer, Lucille wondered aloud when Mass was being held—and Bob quickly recited the schedule. Piety and warm beer: it turned out to be the perfect recipe for romance. The couple was married within a year, inaugurating a family tradition, since thirty-five years later their son Mark would also meet his future wife at B.C.—as would Michael as well, five years after that. Maybe the college could use this in its marketing effort. Meet your Mate at B.C.!

The funeral the next morning was held at the Holy Martyrs Church in Cumberland Foreside, a contemporary structure, just a few hundred yards from the ocean, whose curved oak ceiling beams suggest the prow of a ship. An impressive coterie of church officials attended—Bob was a lawyer for the diocese, and both he and Lucille were lifelong faithful Catholics whose lives and ample good works revolved around their faith—as did an honor guard of Knights of Columbus, in their colorful plumed hats (our ten-year-old daughter, a classmate of Michael and Michele’s ten-year-old son, loved this part). The organist played “On Eagle’s Wings” as the pews filled with parishioners and others gathered to celebrate the couple’s life.

The Robinsons racked up impressive accomplishments in their working lives. Bob argued cases before federal appeals courts and the U.S. Supreme Court, was campaign manager for Governor John Reed, and served as general counsel for the Diocese of Portland and for Catholic Charities of Maine. With his brother he organized a “Red Mass”—a medieval tradition marking the beginning of the legal year—which brought together governors, judges, attorneys, clerks, and law students. Lucille meanwhile ran the nursing school at Portland’s Mercy Hospital, and over the years also organized many church events, for which she eventually was honored as a Dame of the Order of St. Gregory by Pope John Paul II.

The funeral mass was a celebration not of career, however, but of family and marriage. In his homily, Msgr. Charles M. Murphy praised the couple for their “uniquely Christian life and love together.” Quoting Pope Francis in Amoris laetitia discussing how “Jesus’s description of the two houses, one built on rock and the other on sand (cf. Mt 7:24-27), symbolizes any number of family situations shaped by the exercise of their members’ freedom,” the monsignor praised Bob and Lucille for creating a house built on rock, both in their understanding of marriage as a sacrament, and in their habit of loving regard and respect for one another. “They knew that three important words in marriage are ‘please,’ ‘thanks,’ and ‘sorry,’ Msgr. Murphy concluded. “They also never forgot to say ‘I love you.’”

In his remarks, Michael Robinson recalled, with affectionate humor, his father’s dinner-table habit of giving thanks—every night—to a long list of family members, friends and colleagues. The list could be frustratingly long for a hungry child, Michael recalled. “All of you folks were on it,” he laughed, nodding toward the assembled clergy. The naming, he said, was a conscious attempt to focus and to practice gratitude. “They never took life for granted,” Michael summed up.

With wry humor Michael noted the generational divide that separated him and his siblings from his parents and the so-called “Greatest Generation.” “When I was twenty I was in my dorm room listening to Pink Floyd and deciding whether to get a meatball sub,” Michael commented. “When they were twenty, my parents were defending our country in a world war.” He recalled his mother’s experience as a nurse at Camp Lejeune, where wounded soldiers were so numerous, there weren’t enough beds for them, and many had to be cared for in hallways. She rarely spoke about it in later years, Michael said, but he and his siblings nevertheless understood how deeply it had affected her. 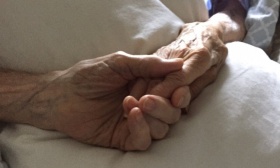 The story of Bob and Lucille, which ended so remarkably with their near-simultaneous passing, has gained broad attention, including this article in the Boston Globe, and a cover story in the Portland Press Herald, where a page-one photo showed their hands clasped together in their assisted living facility, just a day before they both passed away—literally holding hands into eternity. It is one of the most beautiful photos I have ever seen.

In Amoris laetitia, Francis’s reference to families and marriages that are built on rock ties the verse in Matthew to the message of Psalm 128. “Blessed is every one who fears the Lord, who walks in his ways!” writes the psalmist. “You shall eat the fruit of the labor of your hands; you shall be happy, and it shall go well with you.” It sounds like a précis of Bob and Lucille’s beautiful marriage and long life of faith, love, family, and good works.